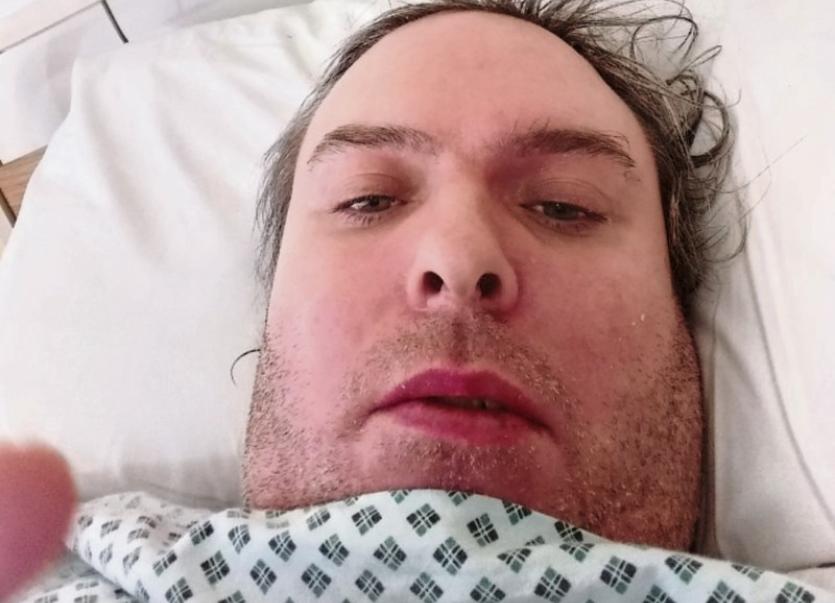 A 39-year-old stroke victim, Eddie Halford from Kildare town, who has been waiting over eight months in Naas Hospital for a bed at the National Rehabiliation Hospital (NRH), says he is at his wits end.

He is anxious to rebuild his life after the debilitating stroke that nearly killed him two years ago and needs a place at the National Rehabilitation Hospital to do so.

However, he has been stuck on a waiting list for over eight months now and the HSE still cannot give him a date.

“I’m in Naas Hospital waiting on a bed for the past eight months,” said Eddie whose family ran Halford Cabs in Kildare town for many years.

“I’m on a list and the HSE don’t know when I will get off it. I am a young man and I want to get back to a normal life again.”

According to Eddie, he nearly died on the operating table after the stroke, which also left him with some brain damage and poor movement on one side.

“I want to get my walking back,” he said.

“My left hand side of my body was most effected, my leg and arms, and my cognitive skills are not as good as they used to be.

“I feel that I am taking up a bed here in Naas Hospital that somebody else could have.

“ I went home twice in the eight months and collapsed in the house. An ambulance had to come and bring me back. Now I am afraid to leave — I don’t want to get stuck in A&E again.”

Eddie lives at home with his parents in Elm Park; however his mum Ann is a full time carer to his dad Eamonn, so returning home to wait for his place is not an option. “My mother minds my dad already at home so I can’t expect her to mind me,” he said.

“The HSE told me it would be three months on average but now when I ring them they say they don’t know.

“The waiting is very hard and it would get you down.”

Eddie, a musician by trade, is known in the music industry as Eddie ‘Bonedigger’ Halford, and in the past has overcome depression through his music and has inspired others to do the same.

He got a guitar from his parents as a birthday present and he says since then music has always been a release for him.

He has played alongside various artists such as Bon Jovi and Willie Nelson — and he now wants to get back to what he does best.

“I am a young person and I never thought I would get a stroke at 37 years of age,” he said.

The HSE, in response to queries about Eddie’s situation, said that while they cannot comment on individual cases the NRH currently has only eight single rooms. However this situation will be addressed through the commissioning of phase 1 of the new hospital in late 2019, early 2020.

It also stated that the current wait time for the NRH for the Brain Injury Programme is 140 days. This is the programme that Eddie has been waiting over eight months to get on.

The HSE declined to comment to the Leader on the delay in Eddie’s case.

“Maintaining a client’s confidentiality is not only an ethical requirement for the HSE, it is also a legal requirement as defined in the Data Protection Acts (1988) and (2003). When a client or family makes personal information public, this does not relieve the HSE of its duty to preserve/uphold client confidentiality at all times. A member of an individual’s medical team will however be happy to discuss any aspect of a client’s care directly with them or their family members.”

In response to waiting times, the HSE stated that there are four programmes at the National Rehabilitation Hospital and in 2018, the average waiting time for each programme was as follows:

“Admission to the NRH is dependant on the hospital’s ability to discharge clients, and to manage limited existing hospital facilities in the context of complex patient presentations whilst ensuring appropriate protection for all residents against healthcare associated infection,” the HSE added.

The statement also added that the NRH currently has only eight single rooms and claimed that this situation will be addressed through the commissioning of phase 1 of the new hospital in late 2019 or early 2020.

SEE ALSO: New hotel on the cards for Naas