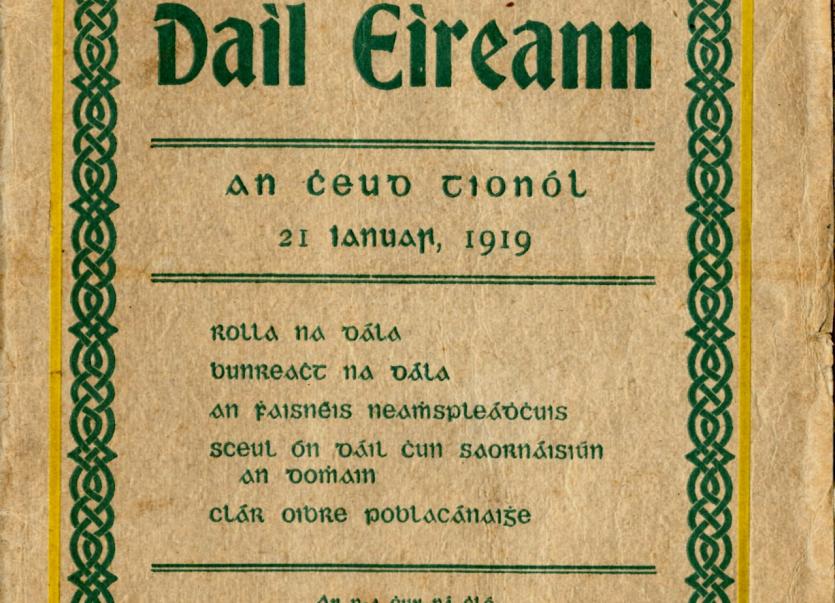 The Kildare Decade of Commemorations Committee will commemorate the meeting of the first Dail 100 years ago on Wednesday 23 January, in the Osprey Hotel, Naas, at 7. 30 pm.

The first meeting was held on January 21, 1919 and two candidates were returned for Kildare, but only one was present. Kildare South’s newly elected TD Art O’Connor, was imprisoned in Dartmoor Jail, detained at the pleasure of a foreign king, while Domhnall Ua Buachalla, TD for North Kildare, took his seat as the inaugural Dáil went into session.

The Committee would like to invite the people of Kildare to a commemorative event to celebrate the 100th anniversary of the meeting of the First Dáil in 1919.

A light reception will precede this at 7.30 pm and members of Lord Edward's Own Re-enactment Group will be on hand to add some period colour to the evening.

Cllr  Pádraig McEvoy, Chairman of the Kildare Decade of Commemorations Committee will introduce the Mayor of Kildare, Seán Power.

A short historical background will be provided by Mario Corrigan, Kildare Library Services followed by a conversation panel with with the Ceann Comhairle, Seán Ó Fearghaíl and Oireachtas members for Kildare.

All welcome to attend.