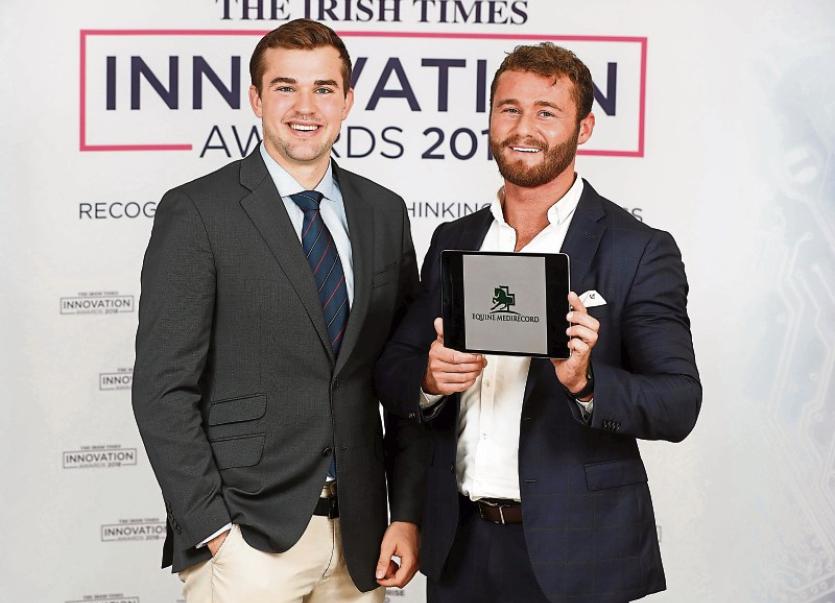 Kildare based company Equine Medirecord, has made it through to the final of the Innovation Awards 2018, the winner of which will be announced later this month.

The company, which is based in The Curragh, was founded by Pierce Dargan and Simon Hillary. It has been nominated in the IT and Fintech category.

The overall winner of The Irish Times Innovation of the Year Award 2018 will be selected from among the five category award winners.

Equine Medirecord’s web platform and phone app takes the pain out of recording the medicines which have been administered to racehorses and other bloodstock.  In horse racing every treatment given to the animal has to conform to strict regulations and must be recorded for subsequent examination by the racing authorities. Clerical errors can result in heavy fines or even bans for trainers.

Pierce Dargan, who came up with the idea when he was doing a Masters in Management in TCD, said their application is the first one to replace the paper-based system which has become unfit for purpose.

“My family has a racing yard and we’ve been in horses for a long time. The medicines and treatments were recorded in this big blue book and entries could be illegible or pages could get damaged. I thought it would be much better if it could be done digitally.”

After getting approval for their digital system from the Irish Horse Racing Board, Dargan and Hillary set about developing the web platform and phone app. The platform, which was launched in Ireland earlier this year with the backing of leading trainers John Oxx, Noel Meade and Colin Bowe rules out most common errors.

Dargan said the market response has been very good. “The uptake here has been very strong. We launched in the UK in August and are very pleased with the response there as well. We are looking at extending into other equestrian sports as well and we have already had enquiries in relation to harness racing in Europe.”

Equine Medirecord is up against Dublin based Aid: Tech which uses blockchain technology to distribute international aid and Priviti from Galway which systemises and manages consent for data sharing, especially for financial institutions.

The aim of the Innovation Awards, which are now in their ninth year, is to showcase and reward excellence in innovation across a range of products and services.

The prize for the overall winner is a unique communications package worth in excess of €150,000 as well as a scholarship for all three Executive Development courses from UCD Smurfit Business School commencing in 2019.

The winners will be announced at a high-profile awards ceremony at the RDS in Dublin on November 20.