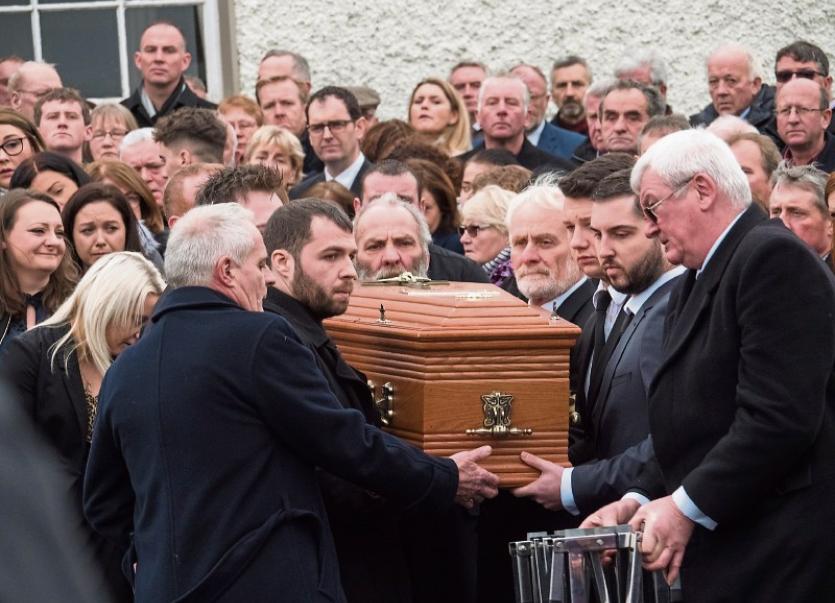 Mourners at the funeral mass of David Boland in Nurney today heard of a man with the biggest heart for anyone who knew him.

The packed out church of the Sacred Heart Church could not hold all who came to pay their respects for the dad-of-one with a massive love for motorbikes, who died as a result of stab wounds received in Athy in the early hours of Thursday, November 1 last.

People lined both sides of the road leading up to the Church for the mass, which was held at 12 pm, and was described  by his family as a "celebration of his life".

The congregation heard about a man who loved the Boland family occaisions, his work and his young son Cormac (8), who will live on in his likeness and as as his lasting legacy.

A motor bike model made by David was brought up to the altar as part of the gifts, along side a Kildare shirt with his business logo on it to represent how hard he worked, and a picture of one of the Boland family’s many gatherings.

The Parish Priest Fr Adrian Carbery told mourners that they were there to celebrate David’s life. He said that the goodness of the community has been shining for the Boland family, his parents Lily and Peter, sisters Cathriona and Maria and his son Cormac (8), as they struggle with the the violent and terrible death of David. He said that the community had been "shaken to the core" by Mr Boland's death.

“His loved ones are devastated as they face the most horrible moment of their lives but the great flood of generosity and love from their neighbours and family has been keeping them going since his terrible death.”

Mourners clapped as the coffin was taken from the Church to the cemetery. Bikers from the local club stood outside the church throughout the service as a mark of respect for one of their former members.

He was laid to rest afterwards in St Brigid's Cemetery, Nurney.