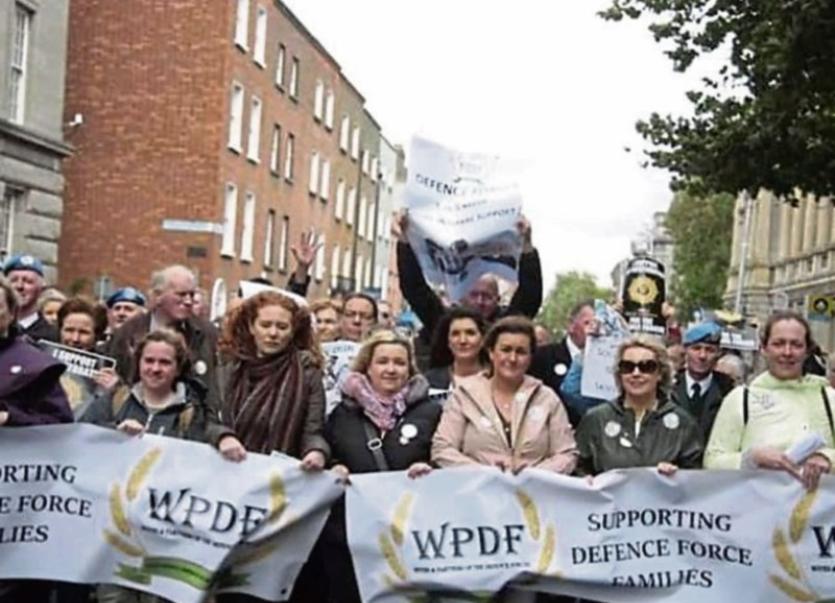 Members of the WPDF protesting in Dublin recently

The Wives and Partners of the Defence Forces (WPDF) marched for better pay and working conditions for members in Dublin last Wednesday, September 19.

They claim that the Defence Forces is in crisis, coping with poor pay, declining training standards and ever more people seeking to leave.

“Our families live in poverty, we suffer from food, income, fuel and child poverty,” said spokesperson Sarah Walshe, who lives in Newbridge. “It is the new members mostly affected, on ‘yellow pack contracts’ and low pay, and they have to go after 21 years.

“I was talking to a soldier based at the Curragh Camp recently who has only been in the forces for three years. She just wants to go overseas to make enough for a deposit for a house and then she will leave — there is no incentive for people to stay.”

While members of the Defence Forces, through their Representative Associations, PDFORRA and RACO, have recently accepted the provisions of the Public Service Pay Agreements and increases in pay have been made accordingly, these do not go far enough, according to Ms Walsh.

“It is breadcrumbs what they are getting, “ she added.

“They are in dire straits and they can't say no, and some of the allowances that were cut do not come under the Landsdowne Road agreement.

“These are unique to the Defence Forces and have left members worse off than nurses and teachers.

“There are over 1,000 solders in the Curragh and most of them can't afford the rent rises in Newbridge and areas around the Camp. There are 48 vacant homes in the camp, which, although in bad condition, could be repaired. They need to set up a housing agency in the Defence Forces instead of putting them on the council housing list.

“Many of these soldiers are young, in crisis and are feeling isolated and fearful of speaking out because they don't want to look bad. The morale is very low.”

In response, the Minister for Defence Paul Kehoe TD said the Government has requested the Public Service Pay Commission to examine issues of recruitment and retention in the Defence Forces.

“We are in a process of restoring pay and reversing the cuts that were introduced across the public service during the economic downturn,” he said in a statement to the Leader.