Tour of St Paul’s Secondary in Monasterevin, shows school is bursting at seams 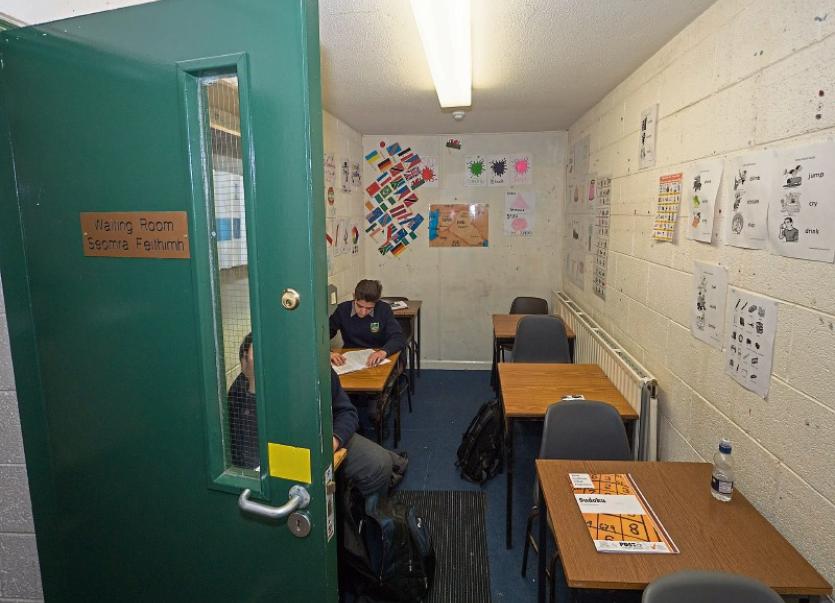 A morning tour of St Paul’s secondary school in Monasterevin is ample time to show that it is bursting at the seams -every available space in the school is used at every minute of the day.

There is never a time when a classroom is empty or a hall is not doubling up to accommodate the needs of the 420 pupils.

“Fourteen members of staff are without a personal room, which means there is somebody in every class room every minute of the school day and class preparation is hard under the circumstances,” said Principal Brian Bergin, who took time out of his busy schedule to show the Leader around.

Our tour begins in the staff room. Contrary to media reports, there is a staff room at the school, but it is small and constantly in use. The teachers’ prep room is even smaller and is used on a rotation basis by teachers, who sometimes have to resort to using their cars to work in.

The delays in building the new 800-pupil school have been mainly due to ongoing problems with the site at Moore Abbey. It is owned by the Sisters of Charity.

The site was first identified by the council working on behalf of the Department of Education. The initial site location had room for a playing pitch but that location was moved, so the current site is now smaller than originally promised. “At what stage does the Department say that the site is no longer working?” asks the principal.

“It was identified by the local authority and aesthetically speaking it is going to be lovely when it is finally finished, but what use is that to us right now?”

Moore Abbey was their preferred location (the first site had room for a huge playing pitch but that fell by the wayside), “so it changed from being a site with a playing pitch to one without and no body ever explained that to us.”

The school board had located 13 possible sites for the Department of Education around the town back in 2011, but none of these were ever considered and nobody from the local authority or Department consulted the school regarding the site.

The estimated cost for a new school build now is approximately €21 million.

“It would have been more cost effective to build it back in 2011 in line with Kildare Town Community College as materials costs have gone up since then,” he said.

St Paul’s school is a Deis school, which means pupils are served breakfast each morning.

We enter the hall where the breakfast will be served just before the pupils pile in and overcrowd it.

The breakfast room doubles up as a classroom, a meeting room, and a room for guest speakers but it is not big enough to host the whole school in an assembly.

“There is no such thing as getting the whole school together unless there is fire drill because there is no space.

“The kids are furniture removal experts — they have to be for shows, open nights, information evenings.

“Our third years, if they do Transition Year will benefit from the new school, and get in for their last year. I’ve been talking about it since 2005, but thankfully a school is a lot more than it’s facilities.”

Outside is no roomier than inside the building. The recess space will be taken up with two more prefabs to arrive over the summer.

The prefabs will be two stories high and they will block any light as well as invade the pupils’ outdoor area.

Career guidance is given in a box-sized room no bigger than a cupboard.

The Syrian refugees, from the local integration centre at the former Hazel Hotel are taught their intensive English and maths lessons in a tiny waiting room that has no windows or natural light.

There are two toilet cubicles for 220 boys at the school, and 18 out of the 27 rooms are prefabs.

The outside space feels small and cramped, with just enough room for First Years to play football. If you get a wet day when pupils can’t go outside, they are packed like sardines inside the school corridors, said Mr Bergin.

“There is that forgotten label associated with Monasterevin and the school is no different. The local Men’s Shed have help out with outdoor furniture for the pupils. They made that bench there and they have been great.”

The tour moves to the prefab area where the science lab and home economics rooms are based, as well as a number of classrooms and resource rooms. The building was built 18 years ago and every available square inch has been put to good use.

“The floor moves in the prefabs if you have a classroom change,” Mr Bergin points out as we make our way through the temporary structure.

It is true that the floor moves under the weight of those walking on it.

The structure was supposed to last for a few years at most, certainly not the 18 plus that it has served to date.

The Home Economics room, as well as a resource classroom, are located right beside the loo and there is a waft as you pass by.

“The staff and pupils have to work in these conditions — it is not good enough, not to mention the health and safety issues with it.”

The resource rooms are starved of any natural light and ventilation. The lighting is harsh and the mind boggles as to how anyone can concentrate, let alone teenagers with important exams ahead of them.

Any space at the front of the school is taken up with staff car parking.

In terms of pitches, the school relies heavily on the goodwill of the community.

“St Peter’s Primary School next door lets us use their facilities as well as Ballykelly Soccer club and Monasterevin GFC let us use their pitches. Sports Day is coming up soon as we can’t do anything on site. We are dependent on the goodwill of the community.”

Earlier this month, Principal Bergin got to state his case before the Joint Education Committee in the Dail.

The lapse in time between the announcement of the construction of new schools and the time at which their construction is due to be completed was on the agenda of the Committee on Education and Skills on, Tuesday, April 17, last.

He described the delays in the building process as frustrating to date.

Mr Bergin spoke of how the initial hopes of a new school in 2005 gradually turned to frustration, anger and despair due to the long waiting process.

He asked if the Department of Education could expedite the time frame of March 2021 for the new school at Moore Abbey.

He also wanted to know what role did the State play in choosing the site at Moore Abbey, and why are there on going legal issues around procurement of the site.

He also asked why the site reduced by 50 per cent despite the size of the project increasing in terms of pupil size, and why the Department of Education does not have a dedicated contact per school in terms of communication.

He said the impact on staff was like being on a roller coaster with delay after delay, adding that staff has grown in the school from 25 to 44 since 2005, while student intake has increased by 100 per cent and space to work is now ‘a difficultly’.

“We have converted a store room for refugees while they are on an orientation programme in the town,” he said.

“The staff and students are wonderful but it is embarrassing when they come back to the school and say you won’t believe what they have — the other local schools in our area.”

He added that the issues for St Paul’s relates back to the site, which came with lots of problems, and a lack of a dedicated project manager from the Department of Education.

“Managing expectations of this has been difficult. We feel neglected and that’s really sad. How could it be better? If all the State agencies come together to identify sites that don’t cause the problems that ours did, the DES can expedite our project by giving it full attention and resources it requires.”

He explained that while the design element of the school can be expedited, a speedy delivery also depends on the completion of the traffic management plan and the site acquisition in order to build the school.

“My understanding is that there is a difference of opinion between the Sisters of Mercy and the Chief State’s Solicitor’s office,” he said.

Meanwhile a public meeting will be held at school tonight at 8pm. All welcome.