St Paul's Principal tells meeting 'it has been hell' 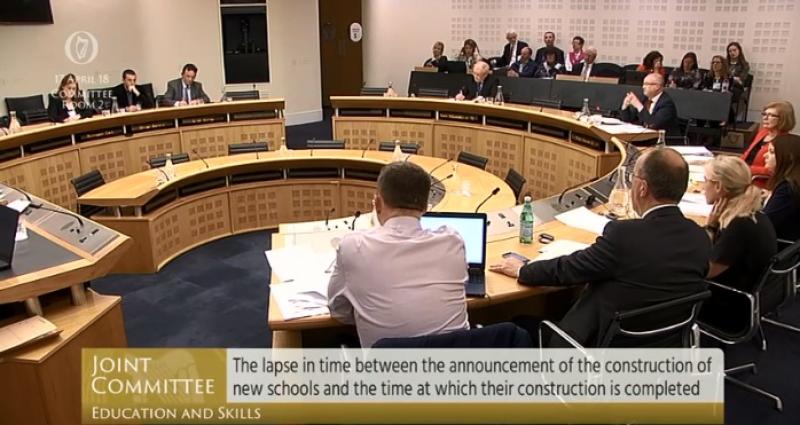 The Principal of St Paul's school in Monasterevin has appeared before the Joint Committee on Education and Skills in the Dail this afternoon.

The lapse in time between the announcement of the construction of new schools and the time at which their construction is completed was on the agenda of the Committee on Education and Skills today at 3.30pm, Tuesday, 17 April 2018.

Also appearing before the Committee were officials from Department of Education and Skills and Representatives from Ballinteer Educate Together National School; Whitecross National School, Julianstown.

St Paul’s Principal, Brian Bergin described the delays in the building process as frustrating to date.

Mr Bergin spoke of how the initial hopes of a new school in 2005 gradually turned to frustration, anger and despair due to the long waiting process.
He asked if the Department of Education could expedite the time frame of March 2021 for the new school at Moore Abbey. He also wanted to know what role did the State play in choosing the site at Moore Abbey and why is there on going legal issues around procurement of the site.
"How can we expedite this?," he asked.  He also asked why the site reduce by 50 per cent despite the size of the project increasing in terms of pupil size. And why the Department of Education does not have a dedicated contact per school in terms of communication.  He said the impact on staff was like being on a roller coaster with delay after delay, adding that staff has grown in the school from 25 to 44 since 2005, while student intake has increased by 100 per cent and space to work is now 'a difficultly'.
"We have converted a store room for refugees while they are on an orientation programme in the town," he said. "The staff and students are wonderful but it is embarrassing when they come back to the school and say you won't believe what they have - the other local schools in our area."
He added that the issues for St Paul's relates back to the site, which came with lots of problems,  and a lack of a dedicated project manager from the Department of Education.

"I feel like the project manager - we don't have a dedicated project manager at the Department of Education - I feel like one but I am powerless. I have been told to be thankful (by the Department of Education) you are on a list - how many lists to we need to be on? I am getting emotional now - it has been hell. Managing expectations of this has been difficult. We feel neglected and that's really sad. How could it be better? If all the state agencies come together to identify sites that don't cause the problems that ours did. The DES can expedite our project by giving it full attention and resources it requires."
Committee Chair Fiona O’Loughlin, TD said that the situation in St Paul's is like teaching in a third world, adding that what is needed is equity and fairness and a school to be delivered within a certain period of time.
She added that recommendations will be made to the Minister for Education.
ADVERTISEMENT
Advertise with Us
ADVERTISEMENT
Advertise with Us