Monasterevin principal to address the Committee on Education and Skills 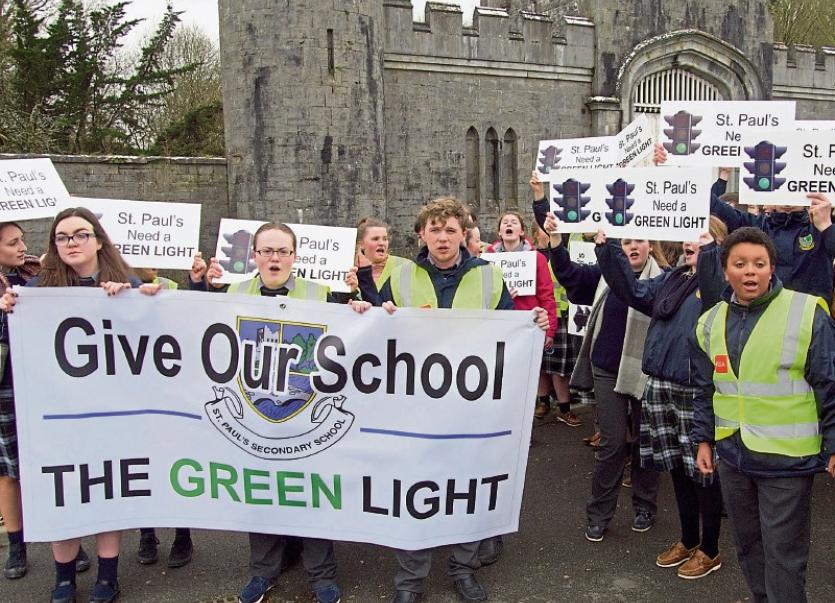 Protesters took to the streets last year in Monasterevin

The principal of St Paul’s school in Monasterevin will address the Committee on Education and Skills in the Dail tomorrow over delays in the construction of the new school.

The lapse in time between the announcement of the construction of new schools and the time at which their construction is completed will be on the agenda of the Committee on Education and Skills on Tuesday, 17 April 2018.

Also appearing before the Committee are: officials from Department of Education and Skills and Representatives from Ballinteer Educate Together National School; Whitecross National School, Julianstown; as well as St. Paul's Secondary School, Monasterevin.

St Paul’s Principal, Brian Bergin, described the delays in the building process as ‘demoralising and debilitating’ to date.

They have been waiting for over 16 years for a new school and their current school is at breaking point in terms of facilities and class room sizes.

“These 25 new schools that have been announced last week is the start of a process that can be debilitating and demoralising,” he said.

“Being on a building list is not the magic wand- the magic wand is having the site and people to drive it forward. I just hope the 25 schools on the list don’t have to wait as long as we do.”

Committee Chair Fiona O’Loughlin, TD said as part of its Work Programme 2018, the Committee on Education and Skills will undertake an examination into the delivery of schools and, in particular, the lapse in time between the announcement of the construction of new schools and their completion.

"The Committee wishes to establish the impact that any potential delays could have on the students, their families and the wider community and therefore we have invited a number of schools, and the Department of Education and Skills to appear before the Committee to discuss the impact of such delays and to get their perspectives on the cause of these delays,” she said.

This meeting will start at 3.30pm on Tuesday, 17 April 2018 in Committee Room 2, Leinster House. You can watch proceedings here: https://beta.oireachtas.ie/en/oireachtas-tv/cr2-live/.

Committee proceedings can also be viewed on the move, through the Houses of the Oireachtas Smartphone App, available for Apple and Android devices.