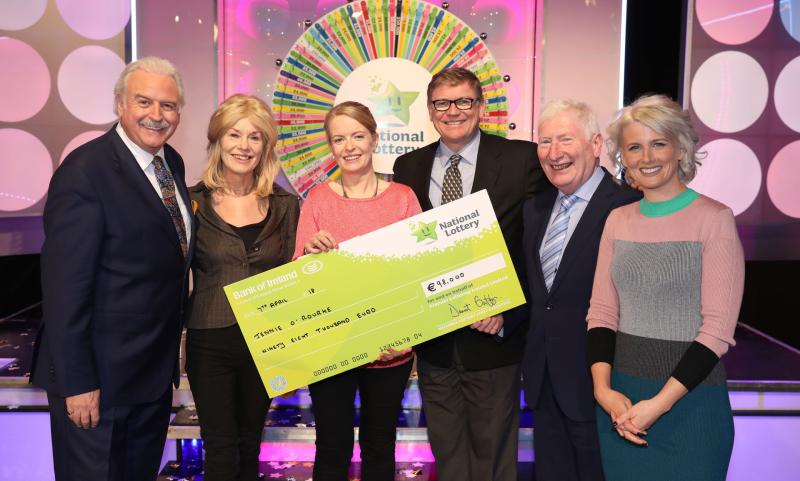 Jennie O’Rourke from Rathangan collecting her winnings on Winning Streak

What a weekend it was for pregnant Kildare mother, Jennie O’Rourke, who not only got to go on the National Lottery Winning Streak game show, but also spun the iconic wheel winning a total of €98,000.

Jennie, from Rathangan, is mother of five-year-old twin boys, Niall and Christopher, and is expecting to add to her family in less than two months’ time. She will soon be taking maternity leave from her job with data support company, Pimbrook, based in Tramore, Co. Waterford.

A delighted Jennie won €50,000 when she spun the Wheel brining her total winnings to a cool €98,000 including a holiday to Iceland worth €3,000. She said that her Winning Streak appearance could not have come at a better time given the new addition to the family and the fact she needs to upgrade her car.

Jennie has been married to Derry-man Seamus for the past four years. Twins run in her family as her mum, Tessie, was also a twin. Tessie and her twin sister Lily were in the audience to cheer Jennie last Saturday along with Seamus, her boys, her three sisters: Margaret, Imelda and Claire and her brother Padraig among other members of family and friends. Her dad, Paddy watched the show from home.