New school for St Paul's in Monasterevin 'kicked down the road'

May be delayed by one year 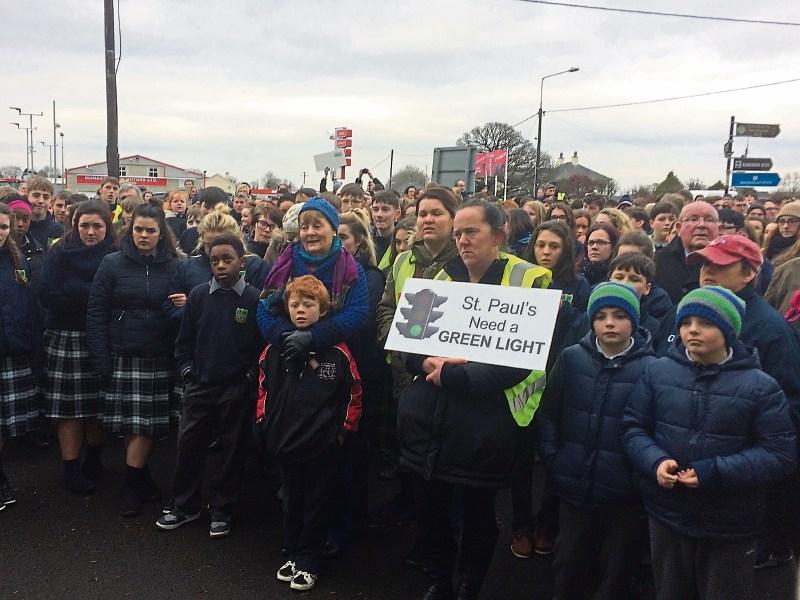 Protestors at a march for the new school last year

The new school for St Paul’s, which was due by March 2020, has been ‘kicked down the road’ for at least another year according to a local councillor.

Cllr Thomas Redmond tabled a motion at the Athy Municipal District meeting held earlier today to support the need for a new school and to write to the Minister for Education to highlight the overcrowding crisis at the current school in Monasterevin.

Members heard that meetings are on-going at St Paul’s over delays in planning for the new school site at Moore Abbey.

“The new school has been kicked down the road,” said Cllr Redmond.

“What ever needs to be done must be done. There are 252 school boys who have to share the one toilet, there is no staff room and there is horrendous overcrowding. Some of the teachers have to keep their coats on in the class rooms when teaching and if they are cold you can be sure the students are too.”

Mayor of Kildare Cllr Martin Miley said that he supported the motion. “The problem is the requirement of the site at Moore Abbey – there seems to be a legal issue with the vendour and the Department of Education. We need that process to move forward as soon as possible. The timescale for the new school was March 2020 – this is now likely to be missed.”

Cllr Wall said the new school is going to be delayed by one year.

He added that the Minister for Education needs to visit St Paul’s school or at least write to the school to inform them what is going on.

“The new school is going to be delayed by one year,” he said.

"The Minister needs to clarify what is the hold up and if it is a legal matter -let’s clarify that once and for all.”

The Department of Education confirmed recently that ‘every effort is being made’ to finalise the new site for St Paul’s Secondary school in Monasterevin.

A statement said that "every effort is being made to expedite the process and bring this transaction to a successful conclusion. The Department will shortly be issuing a letter to the school outlining proposed dates for tender and construction.”