Not even Storm Emma could stop them 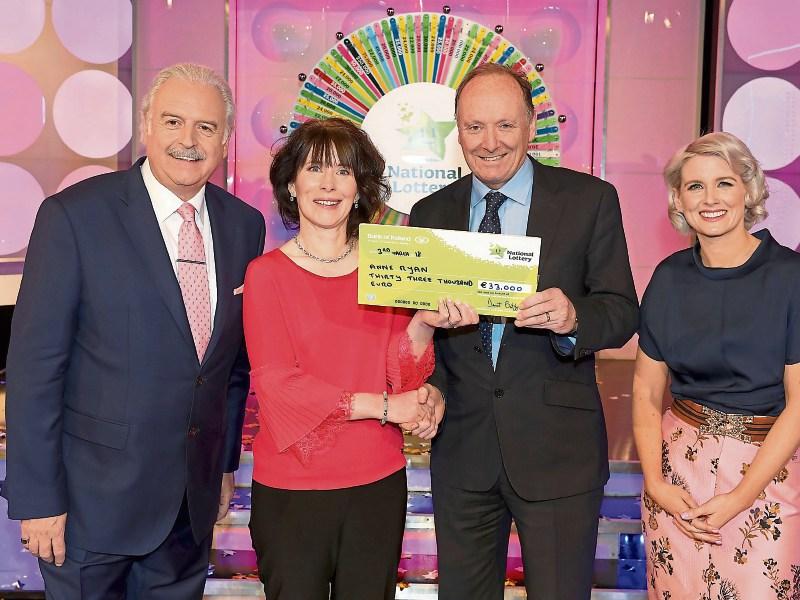 Two Kildare people braved the elements after Storm Emma to take part in the National Lottery Winning Streak game show on RTE One last Saturday March 3 winning a combined total of €61,000 between them.

Anne Ryan (50), from Newbridge and Paul Fogarty, (56) from Carbury said after the show they were delighted that the atrocious weather conditions didn’t stop them from the experience of a lifetime.

Ann works as a Holistic therapist and is a busy mum of two boys Daniel (11) and Luke (8) who both supported their mum from the Winning Streak audience, along with her husband of 12 years, Seamus.

Despite the harsh conditions Anne and her band of family and friends took care and made their way to RTE studios carefully on Saturday morning. Anne won a total of €33,000 which included a Toyota Corolla worth €25,000 and €8,000 in cash.

During the day Anne, originally from Ennis in Clare, looks after clients at the holistic centre in Naas, helping them alleviate stress and anxiety while getting to the root of its cause. She also has a number of long distance clients she checks in with over Skype too. She has no firm plans on what to do with any winnings but says she “will pay off a few bills”.

Meanwhile Paul got the shock of his life when he was watching Winning Streak on Saturday week last and saw his name being pulled out to appear on the show. The hospital supplies officer wasn’t letting the snowfall stop him appearing on Winning Streak and bagged himself €28,000 in cash on the show

Originally from Tullamore in Co Offaly, Paul now lives in Carbury in Kildare with his family. During the day he works at Naas Hospital where he is a supplies officer and part of the central buying team at Connolly Hospital in Blanchardstown, Dublin, where he has worked for the past 20 years.

Paul will be celebrating his 30th anniversary of marriage to Carmel next year and the pair have one son, Colin who is 25 years of age. In his spare time, Paul is a keen golfer and is a member of Eden golf club and the Coachhouse golf club. He also has an interest in vintage cars and is a member of the Shamrock Car and Machinery club in Enfield, Kildare. Paul also volunteers to help patients out who travel to Lourdes for pilgrimages. He goes most years to help out those who may need assistance to get around.