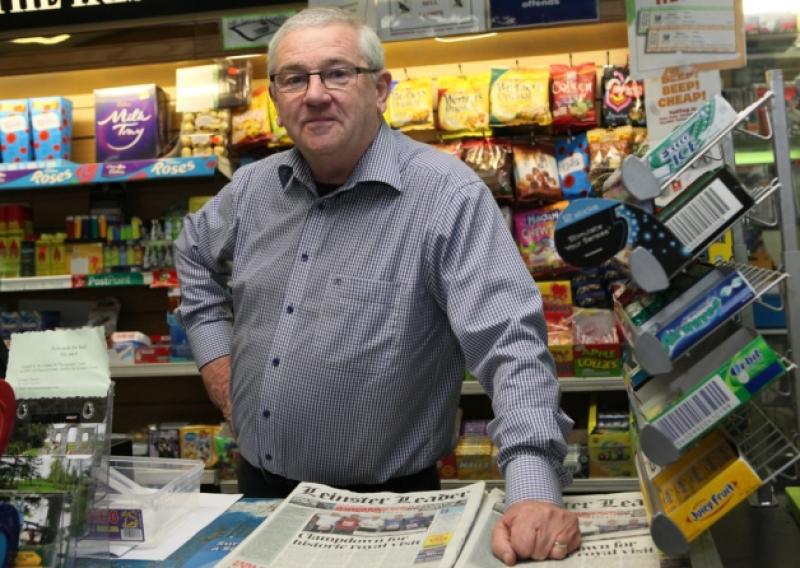 The tales of Lucky Louis have reached near and far after the man himself appeared in the RTE series We Won the Lotto recently.

Louis Hennessy from Malone's Newsagents was interviewed alongside his daughter Jan for the documentary after he sold a €5.7m ticket in 2012 to lotto winner Giustina Macari, from the family chippers across the road.

“It was a great boost to be on the programme,” said Louis speaking to the Leader after it aired on February 12 last.

“We have a reputation for being a lucky shop. We have people come from all over to buy their tickets here because they think they might have a good chance of winning. We even sold one recently and it wasn't collected — €250,000 sold two years ago.”
Louis says the height of his own winnings was €20 won last week in the Silver Circle Draw.

“Over the years we've had lots of wins. I was in getting a hair cut after the show aired and there were people rubbing off me for luck.”

Giustina, who won on April's Fools Day 2012, now lives in Brazil where she competes as a western rider so she was unavailable to be interviewed for the show. Louis pops in for a bag of chips to her family's chipper, Macari's, across the road and it shows an old photograph of Giustina behind the counter serving chips.

Giustina even went back to work for a little bit that day before cashing in her chips for a life in Brazil.

“We thought it was an April fools at first when we heard we had sold the ticket, then it turned out to be sold to the girl across the road,” said Louis' daughter Jan, speaking to camera about the news of the win breaking.