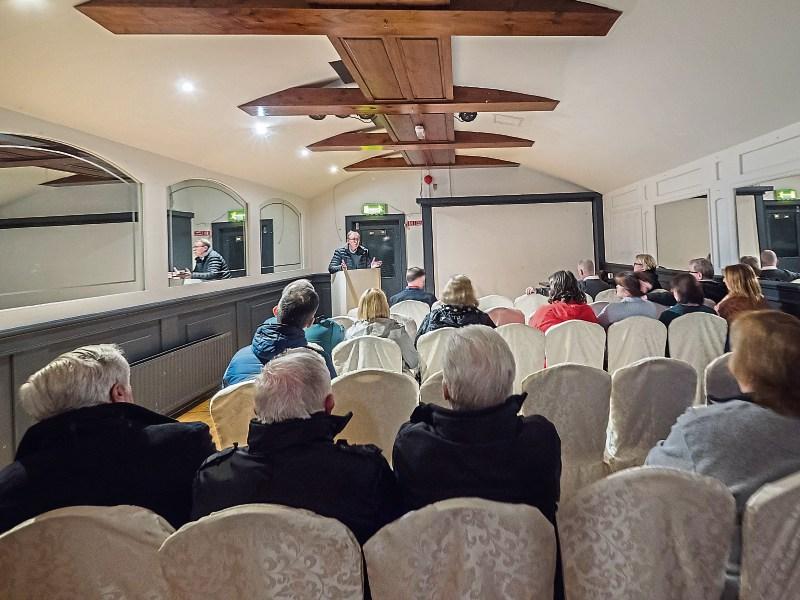 Declan Crowe speaking at the meeting

A meeting was held last night, February 1, in Kildare town to ‘change the narrative’ around the historic swimming pool fund for the town.

The meeting was organised by local activist Declan Crowe from the Kildare Town Community Council to seek answers after it was confirmed recently that 40 year old trust fund will no longer cover the cost of a swimming pool and should be used elsewhere for the good of the community.

Despite a low turnout a committee was formed on the night. They want to deliver on the promise of a swimming pool for the town.

“We want full and open meetings with the trustees,” he said.

According to Mr Crowe there is a discrepancy over the total amount in the fund.

“No body thinks €140k will build a swimming pool but that is not the point,” he said.

“There are two public pools in Kildare – we are badly served in that regard. We as beneficiaries of the fund have rights to the fund and we are going to assert those rights. We are calling  on people to contact the charities regulator to say that they don’t want the fund dissipated or fluttered away.”

Meanwhile Kildare Community Council wrote to the charities regulator to request that an investigation be carried out and the regulator has confirmed that this will go ahead in the near future.

The current trustees for the Kildare town swimming pool fund are Pat Mahon and Charlie Bergin.

The solictor is Paul D'Arcy.