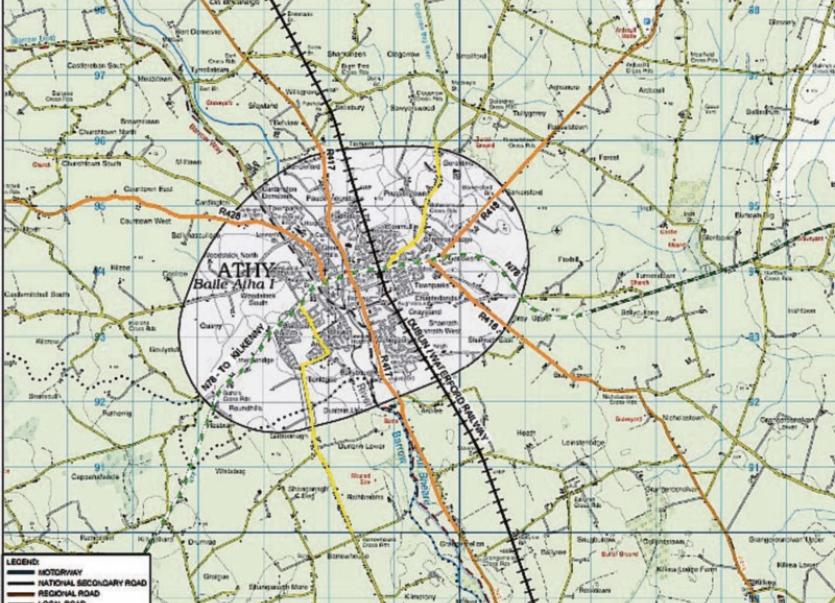 The funding for the approved ring road for Athy, which will cost Kildare County Council €35 million has yet to be secured.

Members of this month's Athy area meeting which was held on Monday, October 23 last heard that the estimated €25million required to complete the road has yet to be secured.

Cllr Martin Miley welcomed the news but said that it is important now that they see the funding being channeled through for the project.

“This project will change the future economic development of Athy," he said.

“There is a real buzz around the town and we need to keep this going with an emphasis on funding and where we are now with this.”

Cllr Mark Wall also welcomed the planning permission for the long awaited project which is 50 years in the pipeline, however he added that they 'must act now' on it.

“This is very positive for Athy and it is 50 years in the pipeline,” he said. “One million was allocated to the project last January. We all want to see it starting in 2018 for completion in 2020.”

Cllr Mark Dalton said that the council must put the foot on the pedal with regards to funding.

“The CPO statutory limits sre now automatically ticking and we need to be mindful of that.”

Cllr Thomas Redmond said it was fantastic news for Athy and for local businesses in and around the area.

Cllr Aoife Breslin said that a lot of former councillors worked on this road and it is 'now on it's way'. She praised project engineer Clodagh Lyons for her hard work on getting it to this stage.

The meeting was told that Clodagh Lyons will give members a full report on the ring road at the next area meeting.

The 3km stretch of road, once it opens in 2020, will alleviate congestion from up to 15,000 vehicles a day travelling through Athy town.

After decades of lobbying and planning the new road, effectively a ring road that will bypass the town, is expected to ease traffic congestion and allow for proper planning and development in the town.

It’s the final piece in the jigsaw after Kildare County Council was given the green light back in April from the Departments of Transport, Tourism and Sport and Public Expenditure and Reform. Delay times at junctions onto the main street in the town could be reduced massively when it is finally completed.