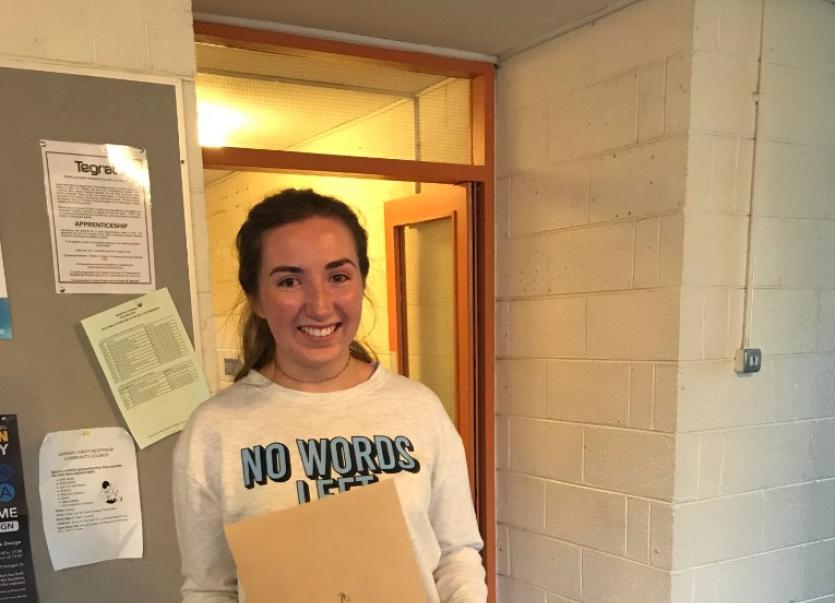 “I can’t even speak,” said top student Laura Cleary after she collected her Leaving Cert results at St Paul’s secondary school in Monastserevin.

Laura scored 544 points meaning she will get her first choice of radiography in UCD.

Fellow student Philip Shallow, meanwhile, took it all in his stride.

“I’m happy with mine – I don’t know what I’m going to do yet – I just enjoyed the summer and only thought about it this morning. I do like art .”

Brian Moran said he was happy with his, while Katie Krabb, added that she was delighted.

Ciara Fanning Siney said she did well and would wait now to see what offers she gets in before deciding what to do.

in contrast Jordan Bolger knows exactly what he wants to do.

“I want to go into the army,” he said. “My results are good today. I have applied already for the army and passed everything so I am now just waiting to hear.”

School Deputy Principal Mary Mullally said they are delighted with the results overall.

“We are really happy for the students and with their results. They all worked so hard along side their teachers and parents. This is a great day for them.”

There were also good reports from the two schools in Athy.

John McCormack of Ardscoil na Trionoide said that the general impression among students was that they were “really really happy”.

“They’re gone off smiling, notwithstanding the rain,” he joked.

“They came in very nervous, but they’re happy now.”

He said that the new system of marking took a while to get the hang of.

“Instead of A’s and B’s, you have H1 and H2, but we think that it’s worked out the same, results wise, as previous years.”

A total of 150 students sat the Leaving Cert in Ardscoil na Trionoide.

Richard Daly of Athy Community College said the Leaving Cert went “exceptionally well” for the 70 plus students there.

“We’re used to a,b and c and the numbers don’t look the same, but I would say the results are significantly up on previous years, which is nice. Maths and science did particularly well."

He said that the new marking system which allocates CAO points even if a student gets as low as 30% in a subject, has encouraged more to attempt honours subjects.

He predicted that the points would caught difficulty for the universities around the country.

Eddie Collins, principal of St. Farnan’s school in Prosperous were just under 100 students sat the Leaving Cert, were good.

He said that while students were “anxious coming in, they were happy leaving”, the school this morning.

The new marking system threw the school a little when they first saw it, but they were getting the hang of it.

Mr Collins said that he picked up the results at “approximately 8am this morning and it’s been all go since then!”

Meanwhile, 94 students found out their results at Ardscoil Rath Iomgháin this morning. Principal Paul Murphy said; "all the students seemed to be very happy."

He said it took awhile to adjust to the new grading system, but the students were quickly able to work out the points.

One hundred and seventy student sat the Leaving Cert at Scoil Mhuire in Clane this year.

Today, most of them were trying to figure out the implications of the new points system assessment.

Principal, Pauric Nolan, said the staff were also trying “to get our heads around” the new system. “Next week will tell the tale,” he said. “We wish everyone the best of luck.”

Many students the Leader spoke to were waiting to study the results in more depth.

Students starting arriving at 8.40am with Jean Gillpollock from Carbury probably the first. A delighted Jean said she had done better than she thought and hopes to study archaeology and history in UCD.

Siobhan Judge, who wants to study business in Galway, and Lauren Cahill wants to do nursing in Trinity or DCU.

Jessica Deegan, from Clane, wants to do childcares. She plans to head to Newbridge for a PLC and afterwards to Cork IT.

Orlagh Harris, Rathcoffey, said she is taking a year out and getting a job. “I don’t want to go to college. I want to like to work in retail,” she said, bucking the trend.

Nathan Hodgkiss, who said he was opening his results envelope at home, wanted to do teaching/arts at Maynooth, a course which would require 330 points under the older system.

Liam Aspell was planning to do computer science in Maynooth, requiring around 350, but dependent on the CAO numbers next week. “The results look good,” he said.

Stephen  Duffy thought his third choice of physics with astronomy was on the cards, based on a quick glance. Eoghan Gallagher, who was with him is aiming at law in DCU, requiring around 430 points.

Danielle Rafferty plans to do childcare in Inchicore and her friend, Sheana Gibney is looking at teaching in UCD. “The Leaving Cert was a relief,” said Sheana.

Precious Alli plans to do midwifery in Trinity, which requires 455 points.