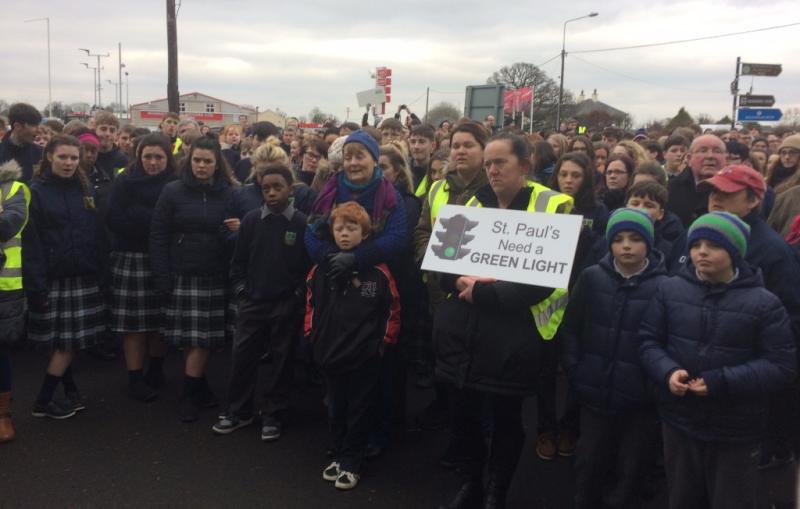 A scene from the march held last February

Planning permission has been granted for the long awaited new St Pauls Secondary school in Monasterevin.

The plans for the new school were stalled last February after spirialling cost set the project back.

School staff, students and parents all came out in protest last February with an awareness march organised from St Paul's Secondary school in Monasterevin, to the Gate Lodge, to highlight the estimated €400,000 costs for the installation of new traffic lights and control measures.

Shouts of "what do we want? - a new school, when do we want it?, now" were heard as campaigners marched through the streets in support of St Paul's new secondary school, whcih has been in the pipeline now for 16 years.

However soon afterwards the Department of Education confirmed that it will pay the estimated €400,000 costs for the installation of new traffic lights and control measures at the proposed new secondary school for Monasterevin.

Meanwhile the site for the new school at Moore Abbey, which was identified by the Department of Education and KCC as the preferred site since 2008, has also seen a number of delays including the negotiation and purchase of the site, road access and sewerage and drain works at a cost of €700,000.

Local councillor Mark Wall said yesterday (Monday) it was very positive news for the students, staff, parents and all those who have worked on this new school.

“It is very much needed and the decision today brings its reality so much closer . Well done everybody involved and I look forward to its completion in the quickest possible time for all involved.”