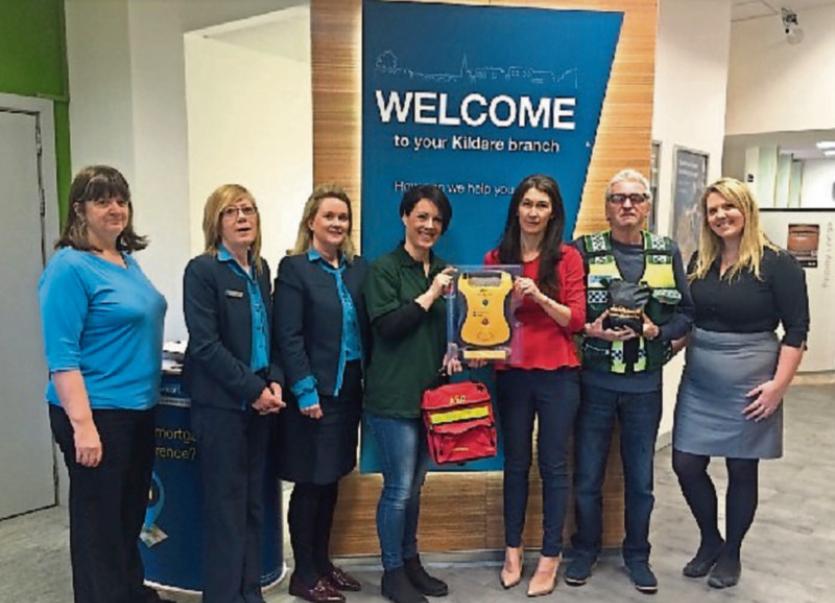 Bank of Ireland has donated a defibrillator to the Community First Responders (CFR) scheme in Kildare.

The donation was made as part of Bank of Ireland’s, “Be at Your Best” programme.

At present, local communities around Kildare are forming Community First Responders schemes (CFRs) which will be linked to the National Ambulance Service.

Joanne Pender from CFR Kildare said that having a defibrillator for CFR groups in the community enhances the ability of local teams to make a real difference when called upon by the National Ambulance Service.

"We are extremely grateful to the staff of Bank of Ireland for their support,” she said.

Defibrillators are small devices that are placed on the chest or abdomen and use electrical pulses or shocks to help control life-threatening arrhythmias, especially those that can cause sudden cardiac arrest. CFR schemes are community groups who work in conjunction with the National Ambulance Service as a first response unit for 999 calls for cardiac instances in the area.

Speaking about the donation, Amanda McDermott, Branch Manager at Bank of Ireland, Kildare said it was a vital initiative.

“We are delighted to be involved in this vital initiative. It has not only created greater awareness among our staff of how simply a life can be saved, but has also given us a chance to give something back to the community who support us constantly in our business. We are thrilled to be in a position to help them provide such an essential service.”

As part of the BOI programme staff hosted a number of fundraising activities including a “Couch to 5k Run”, and Treks across Mountains in Dublin, Sligo, Galway, Kerry and Belfast , and various other health related activities.  Across the different events hundreds of employees took part and arising from the fundraising success, the Bank made the decision to continue their support of the Community First Responders schemes, given the valuable, life-saving role played by CFR trained volunteers with access to defibrillators in their local communities.

At present, local communities around Kildare are forming Community First Responders schemes (CFR’s) which will be linked to the National Ambulance Service.