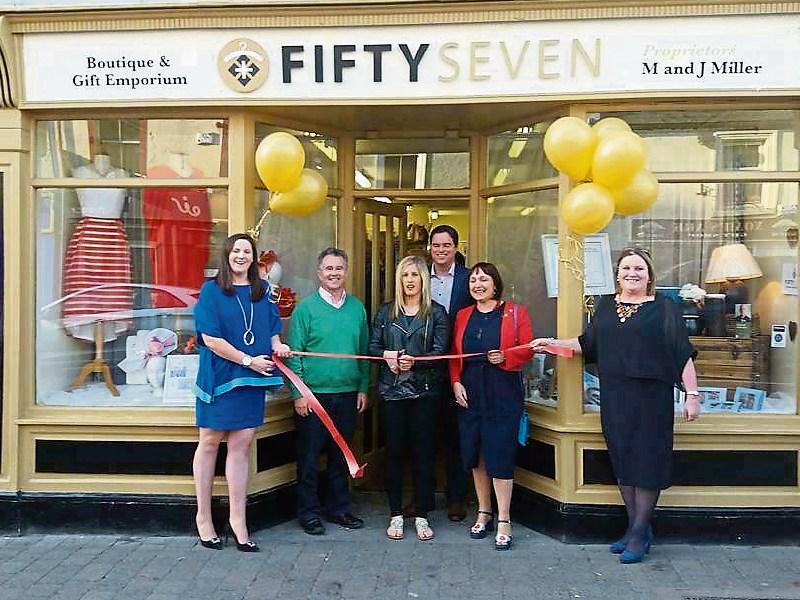 Cutting the ribbon on the new Leinster St shop

There was a big crowd last Friday night  for the offical launch of new shop Fifty Seven in Athy.

This is the second Fifty Seven store to open with Jenny’s mother Mary having opened in Portarlington in 2003.

The premises was packed for the occasion and the speakers included Alison, who chatted about the upcoming Rugby World Cup which will be hosted in Ireland, and TDs from both Laois and

Deputies Fiona O’Loughlin, Sean Fleming and Martin Heydon all wished Jenny well in her new venture while Cllrs Paschal McEvoy and Aoife Breslin were also among the crowd.

Milliner Pamela Curtin and pottery designer Kate Ramsbottom - who both have a close working relationship with Fifty Seven Boutique.

Jenny thanked the business community in Athy for their warm welcome since she opened and said she hoped to be in a position down the line to welcome other new businesses to the town, just as she had experienced.

She also explained the background to her giving up her teaching role to go down this route, saying she had worked with her mother Mary in their shop in Portarlington since she was 13.

“I was working in it for more than half my life - a lot longer than I was ever teaching,” she said.

The shop is open Monday to Saturday, 10 am to 6pm, with late opening every Thursday until 8pm.