Having a virtual go at being a gunner in the Curragh

Army open day in the Curragh 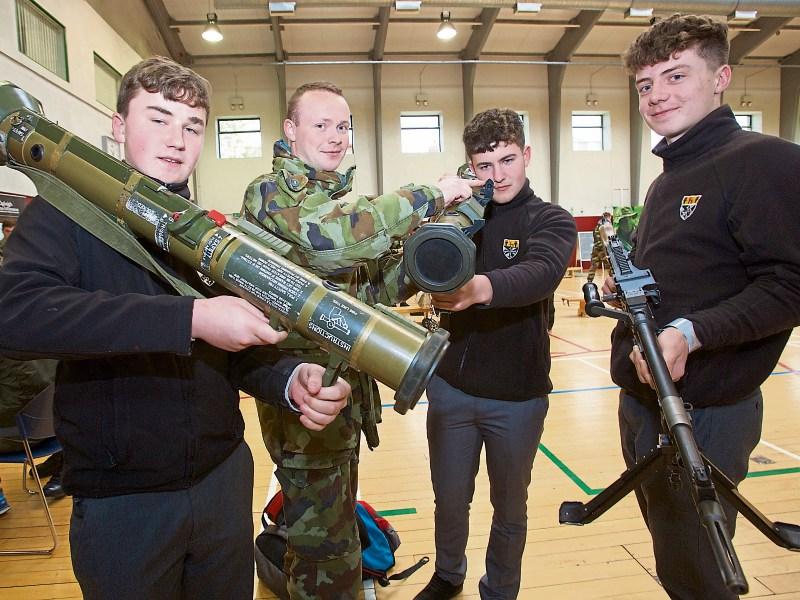 “You've just shot at one of your own,” I was told after my aim misfired as part of the armoured vehicle virtual reality tour at the recent army recruitment open day in the Curragh.

Naturally this was not the plan and thankfully only a game but the experience is second to none.You are placed inside the armoured vehicle in the shooters seat and your job is to shot back at enemy fire.

The headset allows you to stand up through the roof and to sit down for cover once the missles attack. Even the smoke from the far off misiles seems tangible as it fills the space in and outside the window. The headset provides a good insight and gives you the feeling of being shot at in an armoured vehicle abroad. But best of all in my case, with my aim, it was not real.

The open day was held on Monday in the gym at the Curragh Camp for the latest round of recuitment which will see up to 900 new recruits. Only six per cent of the defence forces are currently female - a figure that the army hope to increase in the coming years.
“We are looking for more women,” said Comdt. Colm Lawlor.
“So far we have nearly 5,000 applicants for between 800 and 900 jobs.”
The ideal candidate will be a good team player, fit, and a problem solver. There is plenty of variety in the job and it is an exciting life with good prospects for the right person.”
If the open day is anything to go by, exciting might not entirely cover it.

If you are looking for an interesting, daring and varied career that supports personal growth and development, as well as family life, then this might be the place for you.
Besides the virtual reality shooting experience, there was a fitness test, a peep inside an armored vehicle and army disposal unit, and an opportunity to get up close and personal with some heavy duty weapons.

Part of the thrill for a novice like me was to see how the heavy duty vehicle work from the inside. Trooper Johnson kindly showed me the ropes inside one of the armoured vehicles which to my surprise are made in Switzerland. I managed to get a little video of the experience because for most of us civilians the inside of one of these vehicles is a foreign land.

I also got a tour of the army bomb disposal unit which included a demonstration on how they control the robotic unit from a safe distance inside the van. Here's the short video that I tweeted about it.

There was also a chance to talk to some soldiers about their experience on the job.
Private Joyce Burke, from Newbridge, has been in the army for the past 12 and half years.
“I love it,” she said.

“I've been abroad to the Lebanon and I'm looking to go again in November. I'm an armourer apprentice and no other girls have done that. My dad was one and it entails the mechanics of armoury. It is a male environment, but I have my hair done nicely and I have a little make up on. I'm also a single parent and the army is very family friendly. I can be a mum and a solider.”
Private Eoin Smith was born in the Curragh Camp and is the third generation of his family to join.
“I work as a heavy vehicle mechanic. It is a great job that has developed me as a person and as a mechanic,” said the Kildare man.

I am too old now to join the army but after an enjoyable morning spent on site I did wonder for a split second where could I sign up?