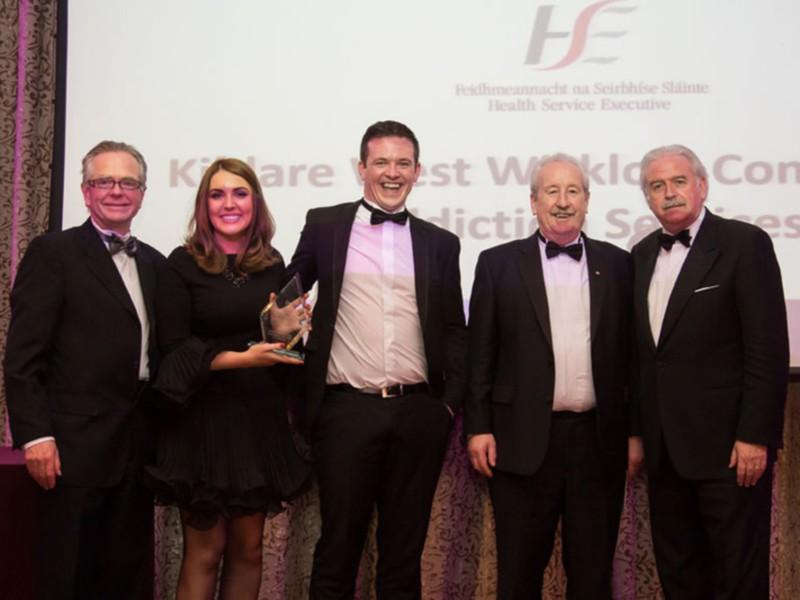 A Newbridge drugs treatment centre, which was in danger of closing three years ago, has been honoured with a top national award.

“The KWWCAS is a community-based treatment and rehabilitation service for individuals and families affected by substance use problems,” explained board chairman, Cllr Paddy Kennedy.

Hundreds of people from the world of Irish healthcare attended the ceremony, which boasted Marty Whelan as MC.

After dinner, the winners were invited on stage to tell their story.

“The night was a rollercoaster of many very moving stories of the work done by healthcare professionals and most agreed the awards won would give their team a little extra spring in their step,” added Kennedy.

Tommy Gilson expressed his thanks to the HSE and the South Western Regional Drug & Alcohol Task Force as funders of the KWWCAS.

“This is a fantastic achievement as it is the first time the organisation entered into this prestigious event.

“This award also builds upon the Community and Voluntary Award that the KWWCAS received from the Newbridge Town Council in 2013,” he said.

The KWWCAS, trading as Abbey Regional Addiction Services, would like to dedicate this award to all those individuals and families who are affected by substance use problems, and thank those service users of the KWWCAS who participated in the application process.