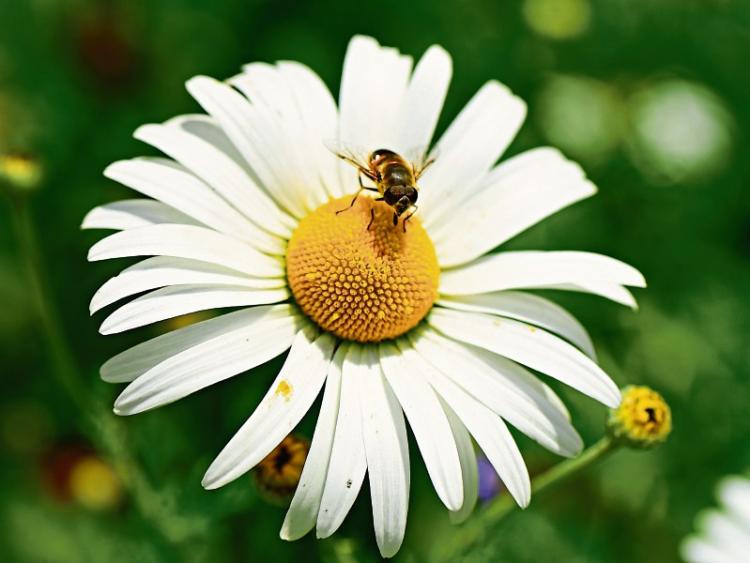 We’re slap bang in the middle of the Tidy Towns judging period, and thanks to the hard work of volunteers across County Kildare, towns and villages are looking at their absolute best for the visit of the mystery men and women with the all-important clipboard.

It was lovely to see last week, as I turned off the motorway junction and drove into Monasterevin town, a sign planted in the middle of a stretch of overgrown verge with the words ‘Bee Friendly’ written in big, bold lettering on it. I’m not sure who put it there — but whoever it was wanted to negate the impression that this was an unkempt, neglected stretch of road on the way into one of Kildare’s prettiest little towns. ‘Tidy’ and ‘well-kept’, in terms of public space, no longer necessarily means a landscape mowed and manicured to within an inch of its life. It can also encompass the concepts of diverse and functioning ecosystems.

This stretch of verge in Monasterevin featured wild grasses and flowers and — true — weeds, but also all the biodiversity needed to help wildlife and insects survive and thrive. The Tidy Towns Awards back in 2015 introduced a Local Authority Pollinator award — won last year by Clonmel — to try encourage towns to become bee and insect friendly.

The raft of undertakings by Clonmel Tidy Towns to win this award were quite impressive, and what was striking was that they put biodiversity at the heart of their Tidy Towns plans, not just as a ‘bolt on’ to projects they had already undertaken. For example, they worked with the council to identify and preserve pollinator-friendly areas on council land and in parks, so they could remain pesticide free.

They also got down on their hands and knees and manually maintained kerbs, roundabouts and flower beds without the use of weedkiller. They’re not the only ones, of course, doing this type of work — Tidy Towns groups and keen gardeners across the country are embracing biodiversity as a vital part of their remit.

The ‘green with a small g’ movement has percolated down to the grassroots, if you’ll forgive the pun, and people are genuinely worried about frightening figures such as the danger of a third of our native bees becoming extinct.

I’m seeing similar efforts all over social media these days, as my houseproud friends surrender parts of their gardens ‘back to nature’. Along with the stretch of lawn and the homegrown veg patch, posts now feature cherubic children frolicking in a patch of wild grass and weeds, hashtagged with something worthy like ‘wild’ or ‘weedkiller free’. And sure look, if it’s just the case that they’re too exhausted from carting growing families about to mow the lawn and have decided to jump on this particular environmental bandwagon, more power to them.

Full disclosure here — this new wildflower power suits me down to the ground. The green thumb skipped a generation in my family and I’d be happy to have to do no outdoor maintenance whatsoever.

In fact, I may just adopt this crusade wholesale, and forego even the twice-yearly tipping of Roundup over the patio to keep encroaching weeds from the door. As I look out at the dandelion heads wafting gently in the breeze, I can explain the scenario away as my part in doing my bit for biodiversity and the environment — and I won’t mention the fact that I forgot to make it to the garden centre yet again. I’m embracing the outdoors as it should be — both beautiful and messy at the same time.