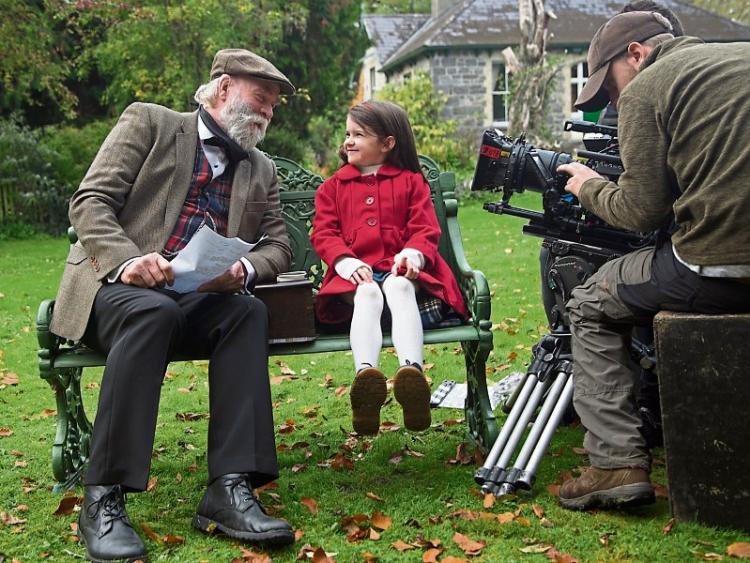 Isabel Connolly during filming of "A Timely Gift"

The private screening of a new short film in which a young Kildare girl plays a lead role is taking place in Dublin on July 22.

Eight year old Isabel Connolly from Clane girl landed a role in the new short Irish film which has been shot in a mill Belmont, Offaly.

Isabel, who featured in Expressway advert running across radio and television and other media and also in a Dublin Airport advertisement, spent around three days on set during the filming of, A Timely Gift, which is about a troubled artist struggling to come to terms with the loss of her identity who receives a mysterious gift from her late grandfather.

Director and writer, Paireac Keane,from Tullamore, told the Leinster Leader that Isabel came along for the fourth day to see other cast.

On Saturday next, July 22, cast, crew, friends and others will gather for a private showing in Dublin.

Isabel (7), who lives with her sister, Ruby (5), and parents, Mandy and Peter on Kilcock road, Clane, is a pupil at Scoil Bhride.

Her mother, Mandy, has accompanied Isabel on her film travels,and helped out on the set, told the Leader this week, said it was planned to run the film on the film festival circuit.

Of Isabel’s participation, Mandy said: “She absolutely loved it.”

Mandy said the team was very mindful of Isobel’s age.

For Paireac Keane, the twenty two minutes film is his first. He had high praise for Isabel. “It is my first film. I’m in the same boat as Isabel but I am not quite as cute. She was brilliant. She’s going to be a future star, I’ve no doubt. She is easy to work with.”

She suffers from a condition called retrograde amnesia. Retrograde amnesia is a condition resulting from severe brain trauma in which the afflicted individual experiences significant memory loss for the time period preceding the injury. Memory loss may stretch from a few minutes to several years in the life.

Filming on the project began at the end of October last and Paireac said he will be applying to have it shown in a number of film festivals. Other actors are Jane Walsh, Janine Hardy and Degnan Geraghty. Other producers are Grainne Carey and James Fagan. Paireac thanked Offaly County Council Arts Office who part-funded the production through the Arts Act Grant, 2017