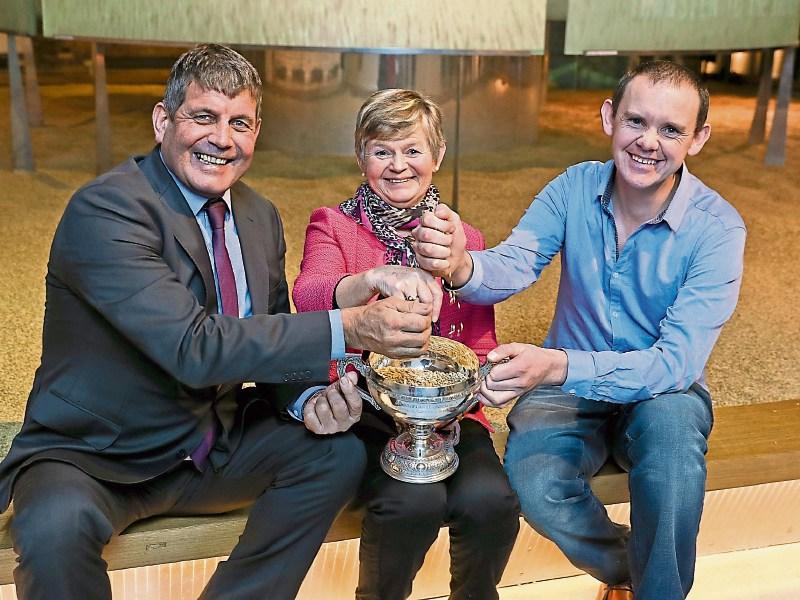 Minister of State for Food, Forestry and Horticulture Andrew Doyle who presented Joyce and Robert Chambers, from Castlemitchell, Athy with the Guinness Perpetual Cup for  Malting Barley Excellence

Joyce and Robert Chambers, from Castlemitchell, Athy, were presented with the Guinness Perpetual Cup for Barley Malting Excellence at a recent awards ceremony in Dublin.

The mother and son team scooped the top prize in the Malting Barley Excellence Awards at the event organised by Boortmalt and hosted by Diageo in the Guinness Storehouse.

The awards acknowledge excellence in malting barley production and promote sustainability in the supply chain.

There are over 600 barley growers in Ireland and the Malting Barley Excellence awards bring together the best growers from the five barley supply regions, while also recognising the best seed producers.

Robert Chambers, who is a third-generation barley grower, said: “We are delighted to be taking the Guinness Perpetual Cup back to Kildare.

“We have been growing barley on our farm for three generations and we work hard to grow barley that is of a excellent quality to be part of this great brewing tradition.

“Growing premium barley requires attention to detail and we have found that by consistently ensuring the same seeding rates and fertiliser rates as per the Boortmalt and Teagasc programme we have seen great results.”

Nicholas Brennan, Barrowhouse, was also a finalist in this year’s awards, along with entries from Wexford, Carlow and Laois.