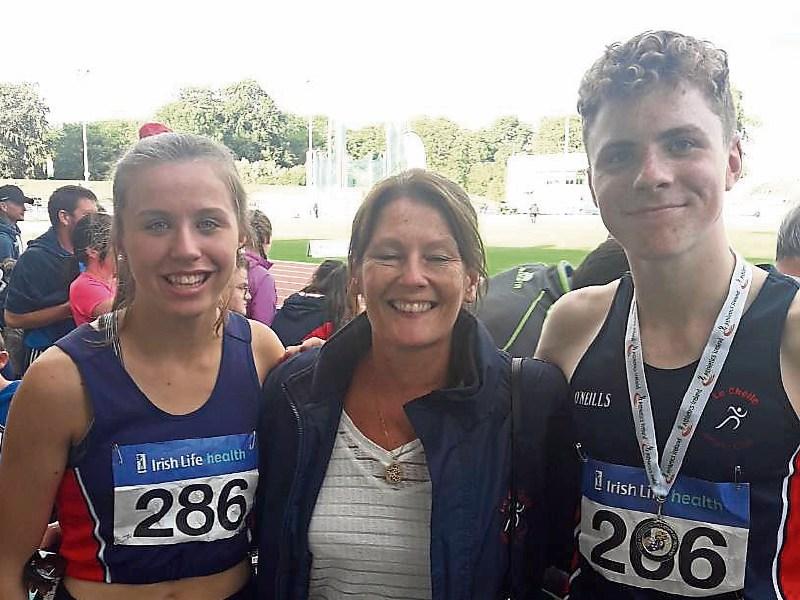 The All Ireland National Seniors Athletics Championships took place on Saturday and Sunday last and Le Chéile AC, Leixlip,  were represented by three athletes, Conall Hayes competed in the 1500m, Caoimhe Cronin in the sprints while Ciaran Connolly competed in the high jump.

Connolly was stepping up to Senior competition for the frist time having won the U19 All Ireland title only last weekend.  He opened at 1.85m which he cleared, had a miss at 1.90m, cleared 1.95m with only two lads left in the competition, himself and U23 athlete Ryan Carty Walsh from Adamstown, Co. Wexford.  Ryan attempted 2m and cleared it on his first attempt and Ciaran Connolly also cleared 2m on his first attempt, the bar was put up to 2.03m but neither athlete cleared it but Ciaran Connolly was awarded the silver as he had that one miss.

Ciaran, from Leilxip, made history being the first athlete to win a National senior medal in a field event, a super achievement for the 17-year-old who will compete on the Co. Kildare teams in the Final of the National League in Tullamore on August 19.

Conall Hayes competed in the 1500m and put in a great effort but just missed out making it to the final, it was the first time the Le Chéile AC had an athlete compete in the 1500m National Senior outdoor Championships.

In the sprints Caoimhe Cronin, 16 just two weeks ago, was stepping up to senior level for the first time also and  ran a super 400m in a new pb 57.3 gaining a place in the final on Sunday.  Caoimhe was in against Claire Mooney who at  26 years is a very experienced athlete who she went on to win the 400m.

Caoimhe will compete this Saturday in the 400m and the 4 x400m relay team on the Ireland team heading out to the Celtic games on the u18 team, which she will also be eligible for  next year.

Clare Mooney also a Kildare native will compete on the Irish Team that has been selected for the European Championships in Berlin in 8 days times.