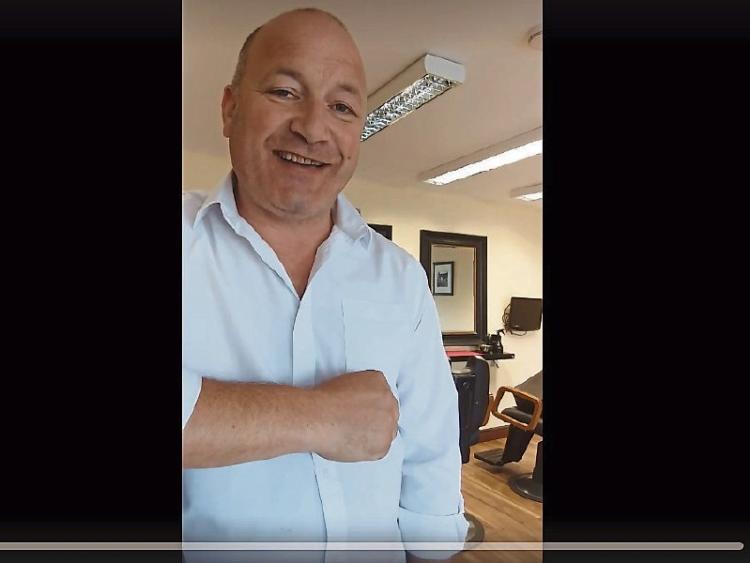 Popular Rathangan barber Mick Dunne announced, in his own unique way, that he is moving on from his barber shop.

Mick posted a video this morning on his Facebook page, thanking the people of Rathangan for their custom over the past eight years.

He explained that he was saying goodbye to O’Duinn’s barbers and to the people of Rathangan who had given him “eight years of fun, frolics and craic”.

“Anybody who knows me reasonably well, knows that music is my life,” he says.

Mick's fond farewell to the people of Rathangan.

“It’s what I love to do. I’ve become really busy recently and I’ve been thinking about this for a while and battling with it. I just cannot keep going the way I’m going, keeping the music going and keeping the shop going.”

The Prosperous man explained that he has a “very special birthday next June”.

“The older you get, the more you realise it’s all about living your life.”

He said that after a lot of thought and discussion with his family he had decided to move on from the shop and concentrate fully on the music.

“So today is my last day. I finish here this evening and I won’t be back.”

He said that a “very dear friend” of his would be taking over the shop, although he didn’t reveal who, citing that the woman had yet to finalise things - but he made a point that she is local to Rathangan.

And he asked all locals to give her their support.

“So there you have it, eight years, gone in a flash. I dunno where it’s gone, but I can’t thank everyone enough down the years.

“So I’m going off now to play songs. I’m gonna hit the road. A little man in a little white van, with a guitar instead of a scissors and comb.

Read more: Music's in the blood for Clane's song writer