'Is that a carrot or chocolate?' - We did Naas 'Dine In The Dark'

Blindfold fundraiser for National Council for the Blind 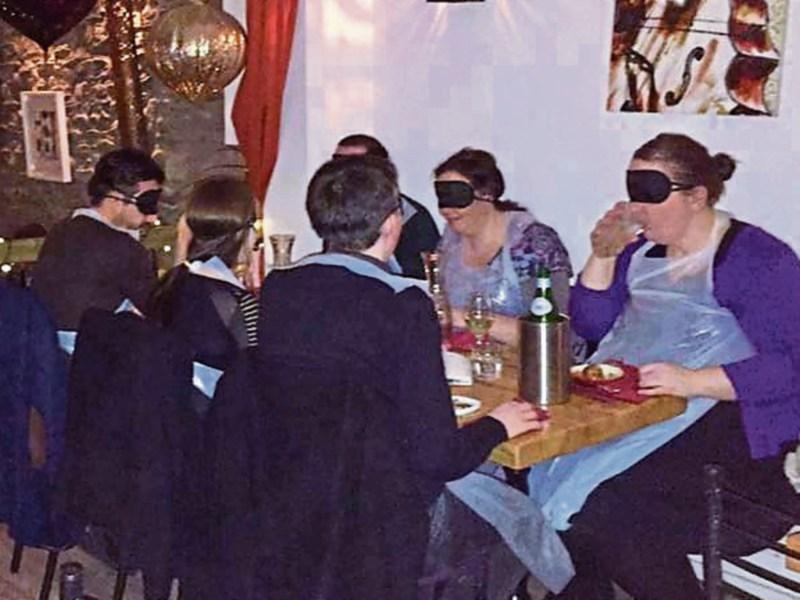 Dining in the Dark at Las Rada in Naas last Sunday

What’s it like eating when you can’t see? Can you tell your cheese from your carrots, or a lemon from a tomato? Fancy wearing a bib and blindfold while having your dinner? Heather Coates went to a recent Naas ‘Dine in the Dark’ event in aid of the National Council for the Blind.

I'm a huge fan of Masterchef. Masterchef Australia to be exact, a TV show that routinely requires its contestants to participate in a blind "taste test" where they must identify foods while blindfolded. The amateur chefs often crumble under the pressure to name everyday items, much to the scorn of the TV audience looking over their TV dinners.

So when Naas restaurant Las Rada Wine and Tapas Bar announced they were to participate in "Dine in the Dark", the National Council for the Blind's fundraiser, I rounded up a few friends and decided to find out exactly how hard it is to identify a lemon.

The apprehension began during the car ride over to Naas last Sunday evening. The restaurant had been informed about the vegetarian who had a genuine worry that she might be served a small cow, but it was the joking yet genuine statements such as "They know about my mayonnaise fear, right?" that made us realise that we were all perhaps a little more fussy than we'd like to admit.

At our table we found our "Dine in the Dark" packs urging us to #GoDark. Each of us had a blindfold and a fetching plastic apron. "The apron will be needed," advised our waitress, as she began to explain how the night would proceed.

All the tables in our section of the room were participating in the event, and all received each dish together. At the end of each course we would be questioned about what we thought we had eaten. We would be using a combination of hands, spoons and sporks to eat.

I rooted in my bag for some of my toddler’s hair bobbins as it began to dawn on us that yes, this could get messy. As the wine began to pour we put on our blindfolds.

The conversation was immediately silenced. Was anyone there or had they all legged it? The effect the blindfolds on communication was a topic of conversation that we would return to throughout the night - how we interacted with each other was altered by the loss of just one sense. Some of the major cues we rely on to feel comfortable and confident in our conversations weren't accessible to us.

The first course arrived and we were giggling. "What is that?!" we shrieked, touching what later turned out to be a bit of greenery on the top of bruschetta. In our nervous states we had imagined spindly bugs. Because, you know, that's what happens when you can’t see. 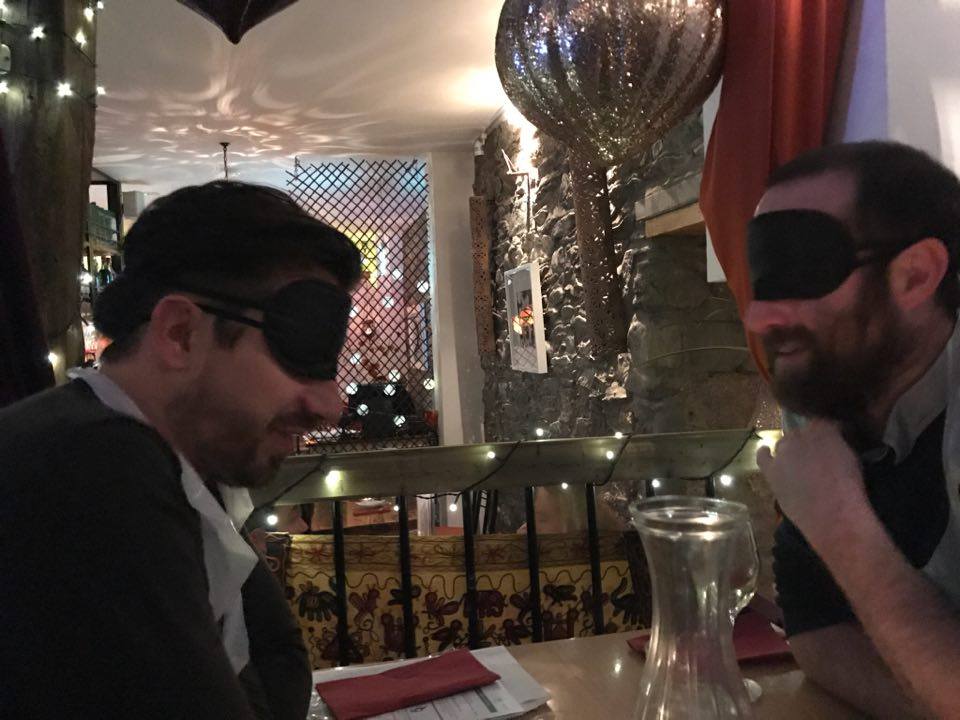 'I see what you're saying...' - Dining In The Dark at Las Rada. Photos: Janette Kelly

The second course was a little messier - I stuck my fingers in hot goo.

"There's bacon!" someone exclaimed. There was a sense of relief around the table - you can trust bacon.

The stealthy staff put down the third course - another shock was when your carefully arranged spork/glass/wine glass/dish arrangement was disturbed. Where is the wine?! This time we found tall cold glasses, and the real arguments began.

While we all identified the lemon sorbet, suggestions for "that other thing on it" ranged from cream to orange. The waitress identified it as Haw Berry - absolutely delicious - an ingredient they've started to cook with this year. My husband decided that drinking sorbet is the way he'll do it from now on.

As we became more comfortable with our blindfolds we admitted that we were resting elbows on the table, searching for "extra helpings" on the table, and holding our heads in our hands instead of looking attentively at whoever was talking.

After too many empty sporks reaching our mouths, we resorted to eating like pre-schoolers (we were dressed for it after all!). We began to lose our food - I know I had a delicious shell of wonderful flavours of vanilla, apple and celeriac but I've no idea where the scallop ever went.

We had arguments over what turned out to be carrots. We realised just how much we can miss when not actively trying to find flavours.

We also missed our mouths trying to drink water. Paul discovered tomato in his drink; Janette spent half a minute trying to convince an empty chair to have some of her dessert. I walloped myself across the face with chocolate because I was holding my spoon upside down. We had immense fun.

I've never not ordered the goats cheese dish in Las Rada (so well known is my addiction that the vegetarian kept quiet when it she realised it was the key ingredient in her variation of a dish so I wouldn't spork it off her plate). What a mistake to make to constantly fall back on favourites!

The best dish of night for me was the partridge stew with blue cheese. I had no idea what it was, but I knew I liked it. As someone who is guilty of eating meals ingredient by ingredient, or leaving "that weird texture" on the side of a dish, it was a lesson in how to enjoy a perfectly balanced dish.

The cost of the meal, including a glass of wine, was €35 pp, with €5 going directly to the National Council for the Blind of Ireland (www.ncbi.ie).