Kildare's Baldonnel Singers back in action after Prague barnstormer 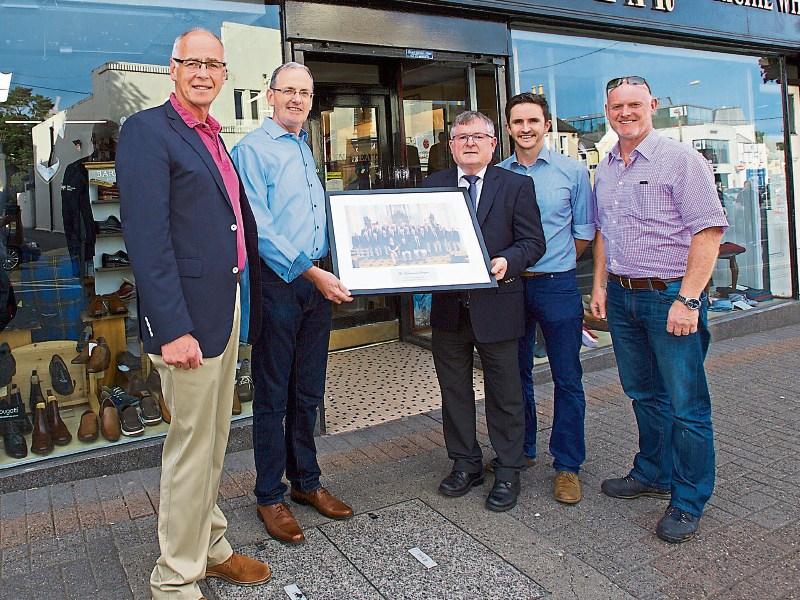 Jim Cahill and Sean O’Keeffe (left) and Dave O’ Brien (right), of the Baldonnel Singers, present a framed photo of the group performing in Prague to Richie, and Richie Jr Whelan

The Baldonnel Singers are back in action next week after their summer break.

The 30-strong male-voice choir finished their 2015-2016 season last May with a tour of Prague where they performed at two public concerts.

Along with musical director David Lanigan and accompanist Anne Cullen, plus a host of supporters, they first performed on Friday, May 27, at the Church of St Salvator, where they were joined by mixed voice choir Sbor Ma’Ta from the Czech Republic, which is led by former Trinity College student Helena Velická.

The venue for the second concert, the following afternoon, was the beautiful St Nicholas Romanesque Church at the city’s famous Old Town Square.

The Kildare choir entranced the crowd of tourists and locals with their verson of Mo Ghile Mear, led by tenor Paul Lenihan, the John Rutter-arranged For The Beauty of the Earth; Verdi’s Va Pensiero and finishing with the rousing Anthem from the musical Chess.

The choir were smartly turned out for their tour in Magee navy blazers, Meyer chinos and Dubarry shoes, provided by their official outfitter Richie Whelan Menswear of Naas.

Baldonnel Singers committee representatives Jim Cahill, Sean O’Keeffe and Dave O’Brien last week presented Whelans Menswear with a framed photograph of the dapper-looking choir performing in Prague as a token of their appreciation for the support.

The choir have recommenced rehearsals for their new season.

Their first scheduled concert of the new season is a joint performance with the Nás na Rí Singers on Saturday, November 5, in St David’s Church, Naas.

On Sunday, November 13, they will perform in St Brigid’s Church, the Curragh, accompanied by the Defence Forces Band.

For more information on getting involved, call Jim Cahill on 045 844229 or follow the singers on Twitter @baldonnelsing.