Music's in the blood for Clane's song writer 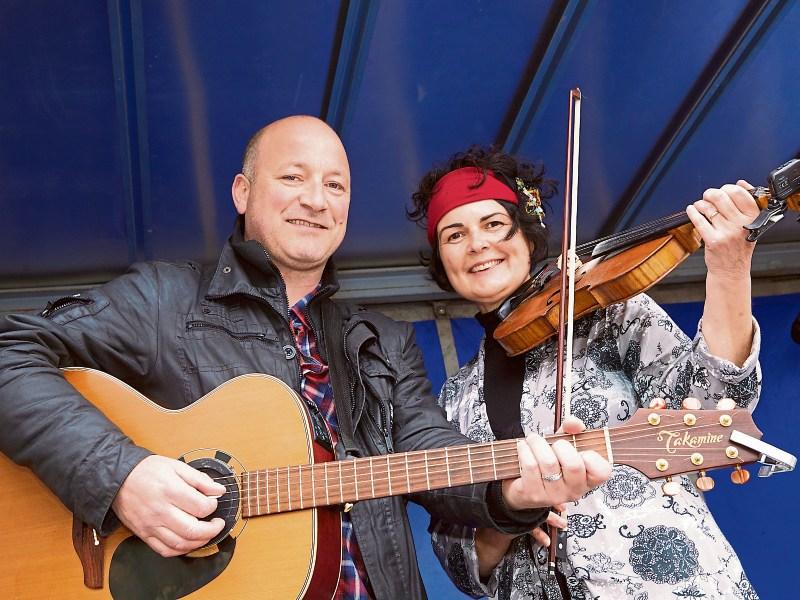 Singer songwriter Mick Dunne was delighted to be asked to write a special song for Clane.

The Clane St Patrick’s Day Festival Committee said it had approached him some time ago and asked him to write a song for 2016.

He had no hesitation. Music is in the blood.

The Leader bumped into the Prosperous man on the Friday, May 27 during the Irish Open related events in the village. We tried to arrange a face to face chat but due to calls to the stage, we had to wait until the following Thursday to meet the Rathangan barber.

Music is in the blood but there has been plenty of other things going on in the life of Mick, who will be 48 in June.

But there is a lot of music. Son of Prosperous native, Joe and Sallins reared, Ann Herbert, of his four brothers, “all would sing a song.”

Married to Tara, a Nottingham UK native and daughter of a Meath mother and Indian father, Mick’s son, Conor (14) has been playing a guitar since he was five.

Mick said he “scraped” a Leaving Cert - he reckons he could be an undiagnosed dyslexic - by which time he had started to work in Dowling’s, Prosperous.

He spent a year in the USA doing floor work with an Irish company. “I was going for a bit of a craic.” By then he had met Tara who was living in England - he reminds us they communicated by “snail mail” - and then moved to Nottingham “to see what the story was.”

He worked for 11 years in the Raleigh factory. “I hated it.”

Then it was as a carer in a nursing home and a spell with the ambulance service.

He started doing gigs in Nottingham and Derby.

The couple then move back to Prosperous. “We wanted to bring up our children (Conor and Niamh, who will be 18 in July) here.”

After returning he worked with children with special needs for seven years. After taking a year out he set up the barber’s shop.

Tara runs a montessori school - The Beehive - in Prosperous, which has been on to go for six years. She is very popular. “The kids don’t want to go home. At the weekend, they want to go and see Tara.”

Mick is known by the kids as Magic Mick or Musical Mick, sometimes Painter Mick or Gardener Mick.

He writes his own songs and was delighted to obliged when Mary Dunne asked him to write the Clane song.

He has performed in three theatre situations, including at Prosperous, Rathangan and the Abbey in Clane, and seems it prefer it to pubs. While he performs with others - he took to the stage with a friend, Margaret Doherty on May 20 - and likes that, he loves to perform on his own. “I like to tell a story with a song,” said Mick, who list Kris Kristofferson and Johnny among his favourite performers.

Inspiration came from Christy Moore. After seeing him play, “the next day I went out to buy a guitar.”