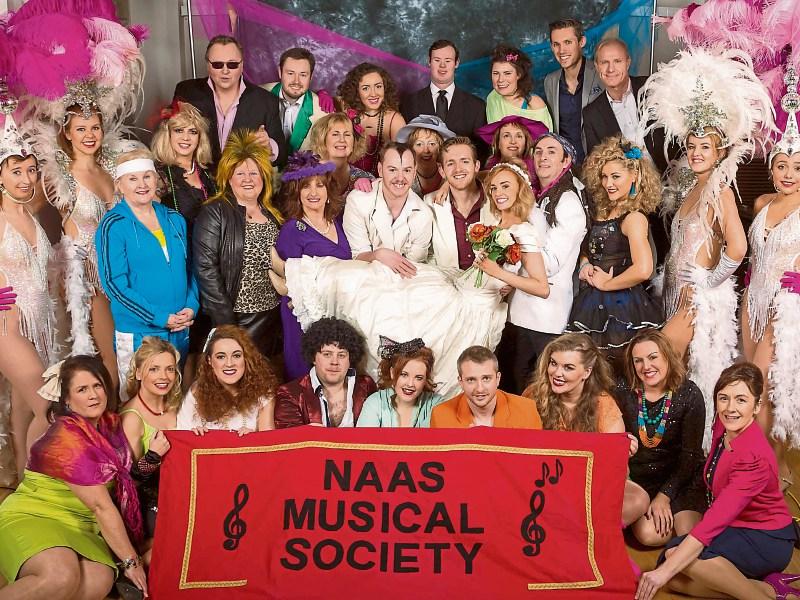 The cast of Naas Musical Society's 'The Wedding Singer'

Naas Musical Society will fill the Moat Theatre with 80s style and colour this month when they stage their 2016 production The Wedding Singer – The Musical.

The show is the musical version of the movie made famous by Adam Sandler and Drew Barrymore, so be prepared for lots of laughs!

The story centres around wedding singer Robbie, who is an old romantic – that is until he is left at the altar! He continues to front his wedding band (badly). The hotel where they seem to be the resident band has the lovely Julia working there as a waitress. She sees Robbie’s distress and befriends him.

Julia is a real romantic too but is engaged to a Wall Street broker who is more in love with himself than her! With lots of hilarity and a rapping granny (Mona Conroy), this will be a show to offer plenty of laughs and songs that will leave you humming them for days.

The group welcomes back AIMS nominee Michael Fay as their musical director.

Deirdre Browne is back with her usual flair for excellent routines. “Dancers may need to have oxygen masks in the wings this year,” said society PRO, Aishling Conway.

Philippa Alford is making her debut as director but she comes with a wealth of experience of both directing and acting.

The show also has a great line-up of familiar faces. Leading lady is AIMS award winner for Best Female Singer and last year’s leading lady, Dearbhail Downey, who is playing the innocent Julia, Sean Mac Mathuna is The Wedding Singer, Robbie, and Sean is also an AIMS nominee.

The band is completed by Dominic Reid playing George and Sammy is played by Jamie Place. The runaway bride is being played by long-time member, Julie Donnelly. The Wall Street self-loving boyfriend of Julia is being played by newcomer Joe Egan. Serena Salmon from HXT Musical Society is also part of the cast.

The show is a fast-paced, real cracker of a show, and there are even special appearances by Tom Jones, Tina Turner and Madonna!

As if all that wasn’t enough, local superwoman of the stage Mona Conroy as a rapping granny, which is really is something not to be missed.

There is a parental guidance advisory on this one as there are some swear words in the script but other than that it’s just pure fun all the way to the Altar! “The cast are having so much fun with this show, there is so much involvement for everyone” added Aishling.

Tickets are already on sale from The Moat Theatre on 045 883030 so buy early to avoid disappointment. “We even have people travelling from down the country to see this one as it has quite a following,” said Aishling. So don the leg warmers and take a trip back to the ‘80s!

The Wedding Singer is on from Saturday 5 to Friday 11 March (shows 8pm nightly, except for Sunday when the show is at 6.30pm).