Athy women behind project to create 'homes' for the 1916 lost 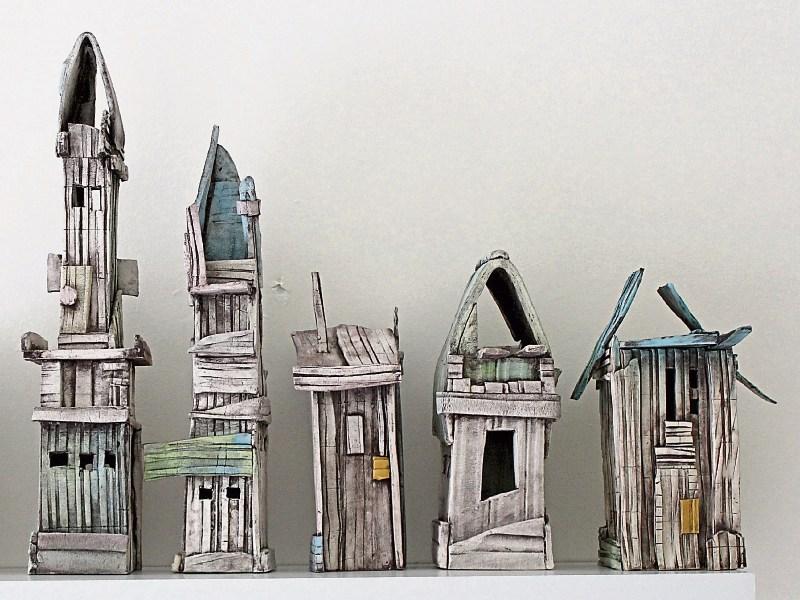 Some examples of the 'houses' created by project volunteers

Pearse, Connolly, Plunkett and their comrades... we’re all familiar with the famous names who lost their lives during the 1916 Rising.

But there were also some 262 innocent civilians caught in the crossfire during that fatal week, many of them children.

A group of Kildare women have come up with a novel way of commemorating the civilian dead of Easter week.

The 1916 Sackville Street Project has recruited 262 volunteers – one for each of the deceased – from across the country to create a model house for each civilian who lost their life in the conflict.

The project is led by ceramic artist Ciara O’Keeffe from Athy with artist colleagues Maggie Owens, Aisling Moran and Sharon Harris Byrne from Killeen and Miriam Griffin from Maganey.

The group decided upon the idea last year when they were sitting around discussing the 1916 celebrations.

“We thought, wouldn’t it be great to remember the civilians that died in some way, and we came up with the idea of an exhibition where each civilian would be remembered individually.”

Sadly, many of the bodies of civilians killed in the Rising were never claimed from the authorities who laid them out in City Hall, as poor families had no means to bury their loved ones.

The artists came up with the concept of creating a little home to house each forgotten soul. With the help of web designer Eamon Connell, who put together a website, they recruited an army of volunteers from a cross-section of Irish society who would build the display.

Some of those taking part include members of a crocheting group from Drogheda, prisoners in Wheatfield’s Aisling Centre, secondary schools and Youthreach groups, including the ones in Naas and Athy.

Each designer picked a civilian and was given the task of researching their life as best as possible, and creating a ‘home’ for them.

“For example, my civilian is Hackett Hyland, a dentist in Dublin. I had to find out who he was, where he was from, how he died and his role in the Rising as a civilian.

“A lot of people found out amazing things. One girl picked a civilian who had the same name as her mother’s maiden name, and she found out he was her great grand uncle.”

The houses are small, measuring 45cm x 45cm, and have been made from materials ranging from textiles to wood – from cloth dwellings to elaborate Georgian homes.

The exhibition will be ondisplay to the public from April 8 to 24 in the Visitor’s Centre at the National Botanic Gardens in Dublin.

There are plans to tour a portion of the exhibition during the year, and it will definitely be visiting Athy.

1916 Sackville Street received some funding from Kildare County Council, Tegral and Athy Lyons Club, but the organisers do need more sponsorship to complete the project and an accompanying book.