Some three years ago, Eric Blatchford, the affable, English-born CEO of Russborough, had a visit from Lloyds of London, the insurance underwriters of the Palladian stately home on the outskirts of Blessington. What they had to say wasn’t comforting to hear.

“They said, your wiring is 60, 70 years old, it’s brittle, it’s going to catch fire. Your water pipes and radiators are 60, 70 years old, they are starting to leak and you are going to have a flood. Unless you replace that mechanical and electrical wiring and pipes, we’re not going to insure you and the place will close down.”

The casual visitor to this historic gem — and there have been over one million visitors to the house since it first opened to the public 40 years ago — will perhaps never know how much work it takes to just keep the doors open, never mind restoring its beauty and revitalising its grounds and gardens.

Keeping the almost-300 year-old house and parkland in good running order soaks up money, and as it is not an OPW property, unlike stately homes such as Castletown, it has to search for grant aid and fundraise for both big renovation projects and ongoing running costs.

Over the past two winters, a million euros has been sunk into the house — with funding split almost evenly between the Department of Culture, Heritage and the Gaeltacht and the UK-based Apollo Foundation. That cash funded the unglamorous if vital electrical and plumbing work and asbestos removal.

Yet the completion of that work means that the National Gallery has agreed to the return — on loan — to the house of artistic treasures from the Milltown Collection, donated to the nation in 1902. From this spring, visitors can now see these paintings back, in many cases, in the same places they were some 275 years ago.

“The National Gallery of Ireland are happy that, if it loans us paintings, there’s a minimal rather than a substantial chance of them catching fire or getting water damage,” said Eric.

The house now has a conservation heating system, which will keep its precious paintings, tapestries and furniture in good condition for the next centuries — which was also a vital part of the National Gallery’s decision to loan out its gems.

The famous paintings returned include works by Sir Joshua Reynolds, George Barrett and Jan Baptist Bosschaert, along with furniture and silverware — all adorning the refurbished chandeliers, tapestries and furnishings which had lost some of their lustre.

Another beauty of the house is its ceilings, the work of famed 18th century Swiss stucco masters the Lafranchini brothers, who also worked on Carton House.

“The ceilings of the house are remarkable, conservation architects would tell us they are among the top five on the country,” said Eric. “But they were always very dim, and you could hardly see the magnificent craftsmanship of the stuccoists from nearly 300 years ago. But now we have lighting around the cornice of each of the rooms, which means that these magnificent ceilings are now a feature of excellent craftsmanship from all those years ago.”

Russborough House itself is full of those small gems and hidden treasures — from an unassuming painting by Walter Sickert, who was theorised to have been Jack The Ripper, hung under the magnificent lantern landing on the second floor; to an ancient and intriguing microscope in a cabinet beside a magnificent china collection; to an original parquet floor which still bears high-heel marks and evokes long-gone days of parties and intrigue.

Russborough’s mission is now to encourage ‘rediscovery’, says Eric. It wants to lure back visitors who haven’t been near the place since, perhaps, a childhood school tour to return and reclaim their part of this wonderful building and its heritage. 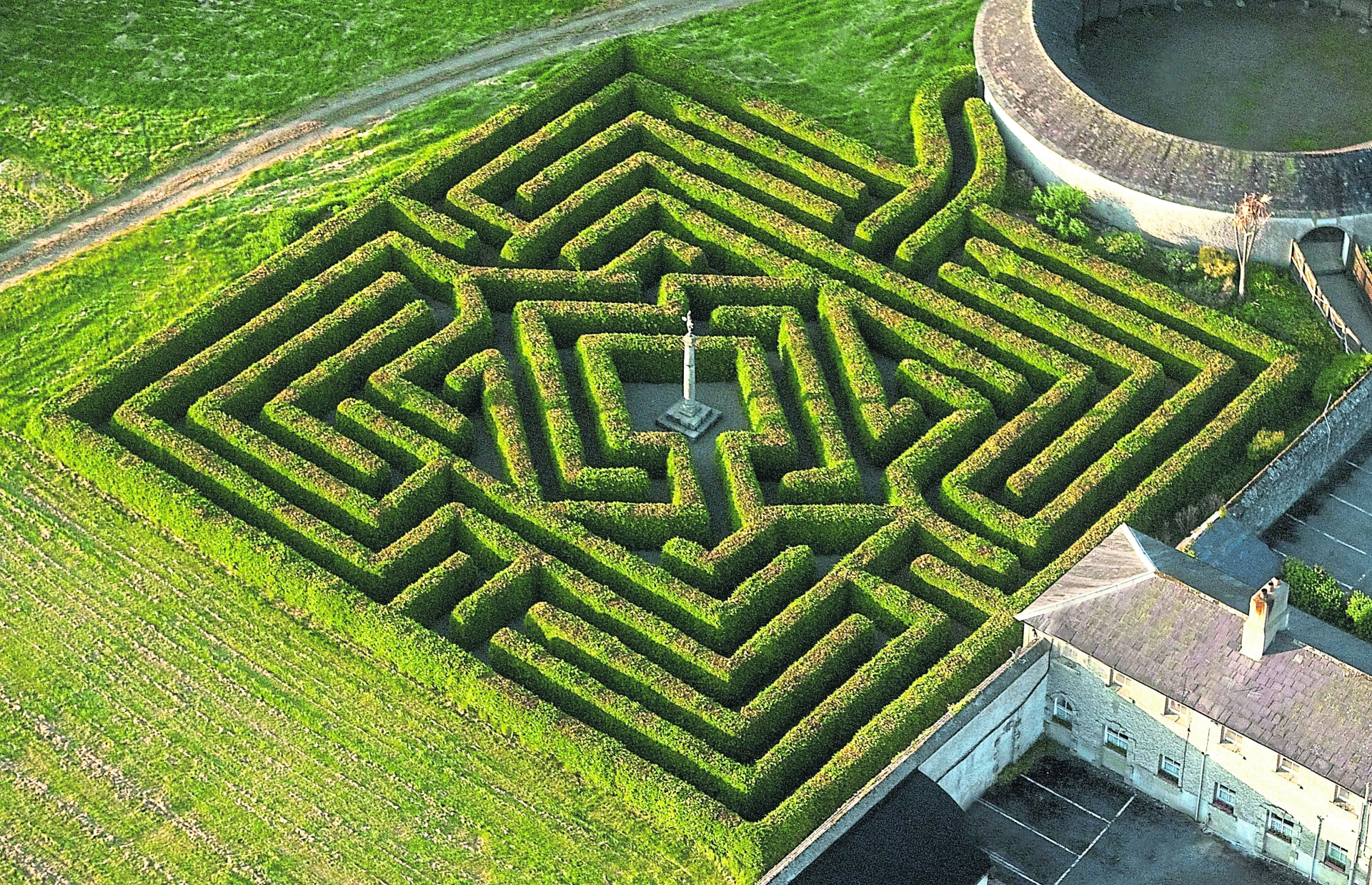 The maze at Russborough

When Eric Blatchford took over the running of Russborough House some 10 years ago, it was estimated that 11,000 people that year took a guided tour of the house, and about another nine thousand used the parklands.

The visitor numbers to the house have since doubled, yet the runaway success story has been the 11-fold increase in the numbers visiting the parklands.

The secret, according to Eric, has been in encouraging locals to claim Russborough as their own — as well as providing high-quality, family-friendly attractions such as a children’s playground, a cafe and a ‘fairy trail’ for youngsters.

The parklands are used on a regular basis by Blessington locals as well, with mini-rugby training held on its lawns, and a weekly 5km free Parkrun taking place each Saturday.

“I’d say, when I joined 10 years ago, that not only was the high demesne wall a physical barrier to the local community, it was a psychological barrier. I think we’ve broken that down.”

Russborough also boasts a high beech maze which seems to confound grown-up visitors. “Children can seem to find their way into the middle of it without a map, and adults get lost even with a map,” laughs Eric. “I know of at least two occasions where adults were in the maze and had to ring the house to say ‘send someone in, I’m lost!’”

Those visiting the parklands pay a small fee for the use of the facilities separate to the guided tour, the proceeds of which go into the day-to-day running of the estate, which receives no government funding for thos purpose.

Russborough is also home to the National Birds of Prey Centre and a wide variety of artisans, who produce crafts from the stately home’s outbuildings.

Another attraction is the 18th century Walled Garden, which had fallen into disrepair until it was taken over by Royal Horticultural Society of Ireland some six years ago. Eric recalls getting a phone call from Robert Myerscough of the RHSI, who said that it had 50 volunteers who wanted to “dig gardens” but who had nowhere to go.

“To which I said, ‘we’ve got four acres, it’s a walled garden, it’s 275 years old, it’s fabulous and we’ve got one gardener who hasn’t got time to do anything with it!’”

Volunteers spent the first 18 months simply taking weeds out of the garden — but last July staged their first garden show there, attracting 2,500 visitors.

The event will be repeated this year, with talks from the North Kildare beekeepers and a performance by the Ballymore Eustace brass band.

This is just one of a programme of events lined up for the summer. Others include the West Wicklow Festival from May 17 to 20, which will feature four days of world-class music; a tea dance with the Ballymore Brass and Reed Band in the Hippodrome on the grounds on June 30; children’s art workshops in May and from September onwards; the ‘Reservoir Cogs’ annual cycling sportive for local charities in September and the popular annual parklands candlelight walk on Sunday, October 28. 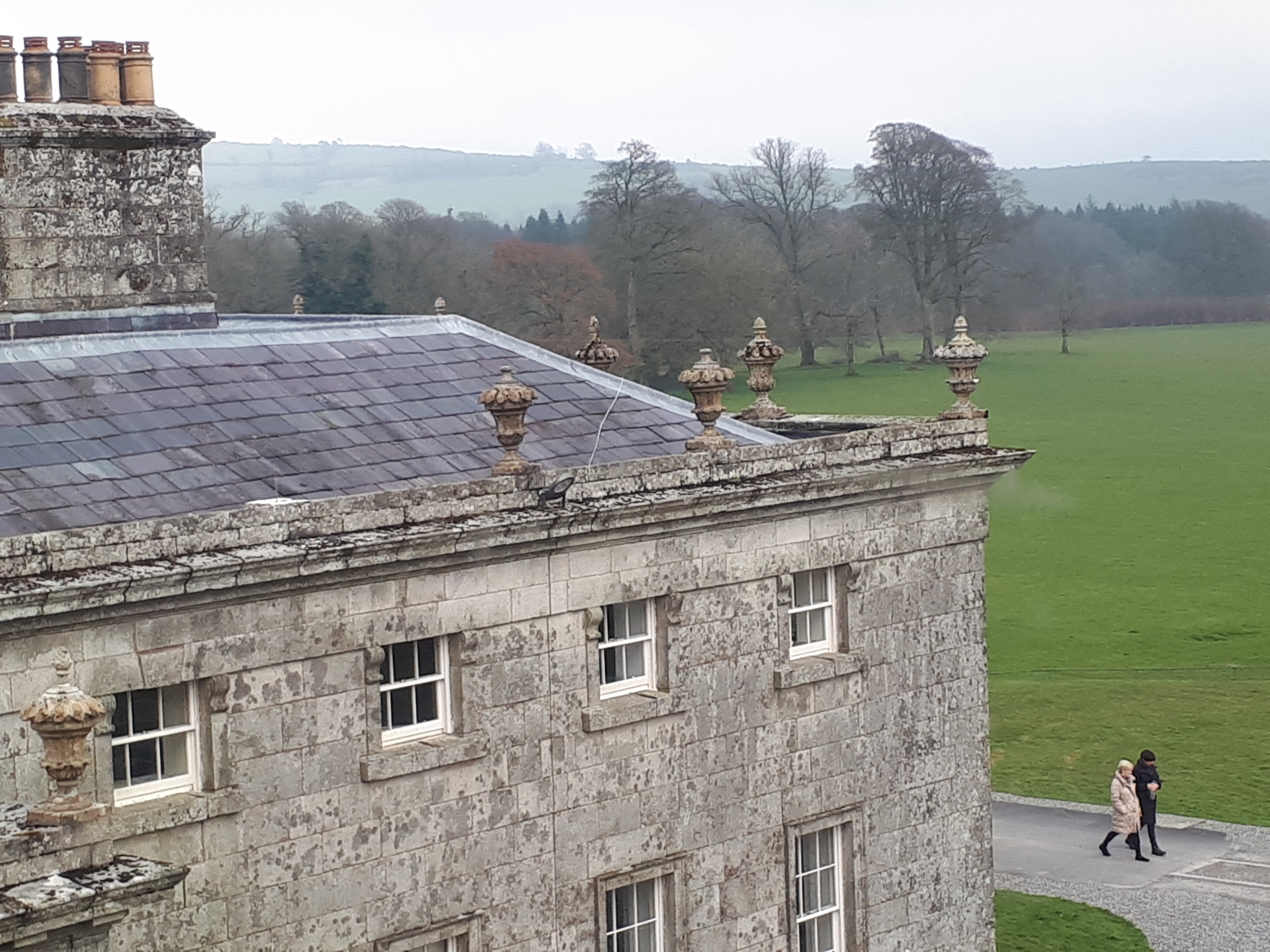 Urns on the parapets of Russborough

Funding the restoration of an entire 18th century stately home might be enough to put off even the most deep-pocketed donor.

Yet even those on more modest incomes, or small local companies who want to make a contribution to the upkeep of the area’s heritage, can make a worthy donation to Russborough.
Two unusual conservation appeals are currently underway at the house, managed by Russborough’s development manager Teresa Crowley.

Some 13 of its 76 distinctive ornamental urns, which are perched on the parapets and the wings of the house, had to be taken down due to safety reasons, and the very real fear that they would come crashing to the ground.

Russborough is looking for sponsorship of €750 to restore each stone urn, and donors will be recognised in a permenent dedication at the house.

Likewise, the 12 classical statues which stand in the colonnade niches flanking the central part of the house are in need of urgent repair. The set are the work of sculptor Bartolomeo Scolari from Carrara, and now require specialist cleaning, restoration and stabilisation.

Sponsoring a statue costs €5,000, likewise with a permanent dedication for the donor. “It would be very attractive for a local big business to come forward and get involved in that way,” said Teresa.

The funding of Russborough controversially hit the headlines in 2015 when it was announced that the Alfred Beit Foundation, the entity which owns the house, intended to auction a number of works from the Beit art collection.

There was an outcry that the nation’s artistic jewels were being sold off — but as Eric Blatchford points out, the artworks concerned were not part of the Beit donation to the nation, but were among the Foundation’s own assets. Valuable paintings, certainly, including Reubens and Guardi Old Masters, but they were in storage in the National Gallery and there was certainly no prospect they would ever return to the house itself, due to security concerns.

The Beit Foundation’s assets include the house and its contents — but no cash. As Eric points out, the National Trust in the UK will not take on a stately home unless an endowment to fund its running has been established, most likely from the sale of its contents.

The unfortunate fact is that Russborough was, and is still, desperately in need of money to meet its ongoing running costs.

“Maybe I was one of the catalysts to say, 10 years ago, ‘what are you going to do, trustees?’ Selling cups of tea and charging a few euros into the maze and for guided tours will get you maybe a tenth of the way to where you want to go,” said Eric.
The sale of the paintings has raised €8.7 million for Russborough, which, invested, provides an annual income of around €300,000 towards repairs, running costs, insurance and staff costs. “That goes a long way,” he added.

Russborough also receives some capital funding for specific projects from bodies including Fáilte Ireland, which has given over one million euros over the past decade for works to facilitate access for tourists, such as a badly-needed coach gate.

“Ten years ago, if a tour coach turned up, which they hardly ever did, they had to park down at the end of the grounds — and if they were sixty or 70 years old, we had to get in our cars and ferry them up to the house three by three,” remembers Eric.
Russborough management is keenly backing the proposed Blessington Lakes greenway project, which would see some 30km of paths around the Blessington Lakes.

“It is a question of when, not if, this greenway is extended around the lakes, and we believe it will bring tens of thousands of people a year — walkers, kayakers and cyclists — to the region,” said Eric.

And where better to end their Irish journey than in the grounds of historic Russborough?

Russborough House is located off the N81, 4.5km south of Blessington. It is open seven days a week from 10am to 6pm, from March 1 to December 23.
For more, visit www.russborough.ie or email info@russborough.ie.