A crowd of well over 100 people joined in with chants of 'George Floyd' and 'Black Lives Matter', while they were asked to call out racism where they see it in their communities, at a peaceful Black Lives Matter demonstration in Newbridge this afternoon.

The event started at 1pm in St Conleth's Park GAA grounds car park, beside Newbridge town hall. Volunteer marshalls were on hand to ensure the crowd had masks and hand sanitisers. A mix of young and old plus family groups, many holding signs and banners, stood on clearly chalked spots on the tarmac to help ensure social distancing in line with government Covid-19 guidelines. The protest was planned as a static demonstration, which meant that no march took place.

Black Lives Matter protests have taken place in several towns and cities across Ireland, including Dublin, Galway and Kilkenny, in the last few weeks, sparked by the death of George Floyd at the hands of police in Minneapolis and reflecting the widespread demonstrations across the US. 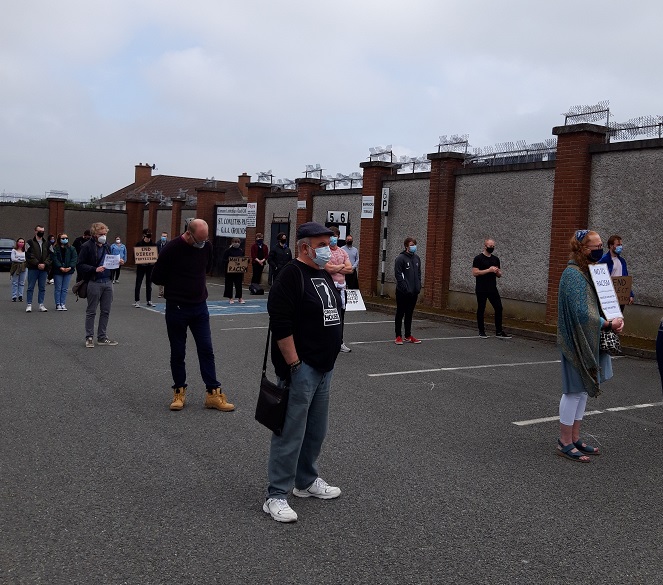 Some of the demonstrators at the Black Lives Matter rally in Newbridge on Saturday afternoon, June 13

In Newbridge on Saturday, the crowd was addressed by speakers who told both of their own experiences of racism and harassment in Ireland, and their hopes that the community would stand against oppression.

Lassane Ouedraogo, a member of the Dublin-based Africa Centre in Ireland, said: "We are calling for everyone to stand with black people because their lives matter as much as anyone else's." He urged people to talk to politicians and their TDs so that anti-racist measures are on the political agenda.

A young woman speaker asked the crowd to call out racism and injustice where they see it in the community. "Don't be afraid to take that stance," she said. "Keep pushing, keep having those awkward conversations. It's not going to be easy, for a lot of us it's our friends and our families... there is certain racism ingrained in them and they may not even realise that they are being racist sometimes, but it just takes that one person to call it out when you see it. Have that conversation. Don't be afraid to take that stand.

"We need to keep pushing for that change, we need to keep being that change in your spheres of influence. Whoever your friends are, whoever your family members are, those are the people that you need to influence, and if everybody does that, then it's just going to flow from the ground up and things are going to change. 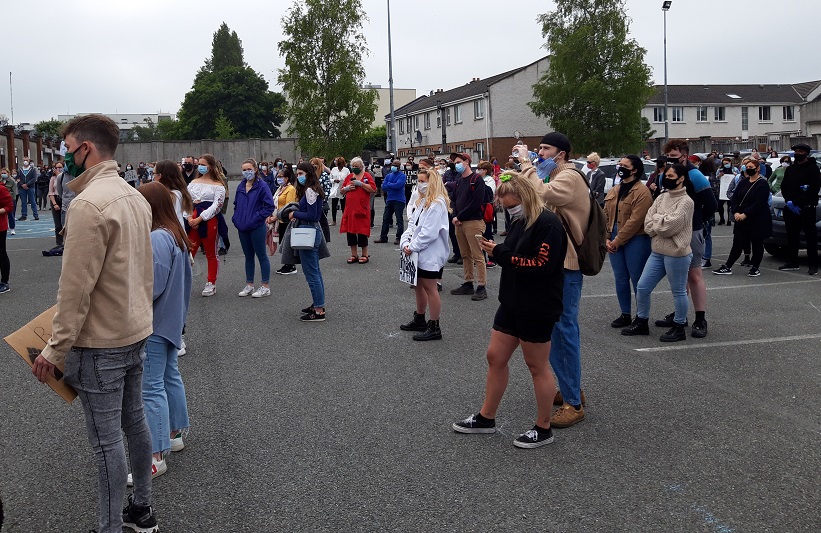 Some of the Black Lives Matter demonstrators in Newbridge on Saturday

Local demonstration organiser Romario Halaoui, seen in the video above, read out a message from a Ghanaian nurse raised in Newbridge, who is currently working on the Covid-19 frontline in Manchester. She criticised police brutality against Black people across the world and added, 'we demand the system is changed and systematic racism erased... we are one race, which is the human race. We are fighting a war, which is against racism'.

Romario told the Leader that he wanted to thank the community of Newbridge for their support for the event, which was to amplify the voices of people who are not currently being heard. Romario also plans to set up a Facebook group for local people interested in the issues.

The demonstration lasted around 45 minutes. The organisers thanked local gardai for their support and cooperation in organising the event, and Cllr Chris Pender for his involvement.