Maynooth man Liam Cannon turned 80 last week, on May 14 and, as per usual on a Tuesday he met up with his buddies for a 80 km cycle.

They met in Celbridge and headed out beyond Enfield to Mother Hubbards, before returning at a right clip of 25kph.

It was a special occasion for Liam and members of his family joined him and his regular cycling buddies ‘Les Plonquers’ (the plonkers, in English) on the spin.

It was neither his first nor last cycle last week. In fact, Liam usually completes more than 200km a week on his bike, many with his wife Lily.

Admittedly this is not how most 80-year-olds spend their retirement, but Liam is no ordinary octogenarian. 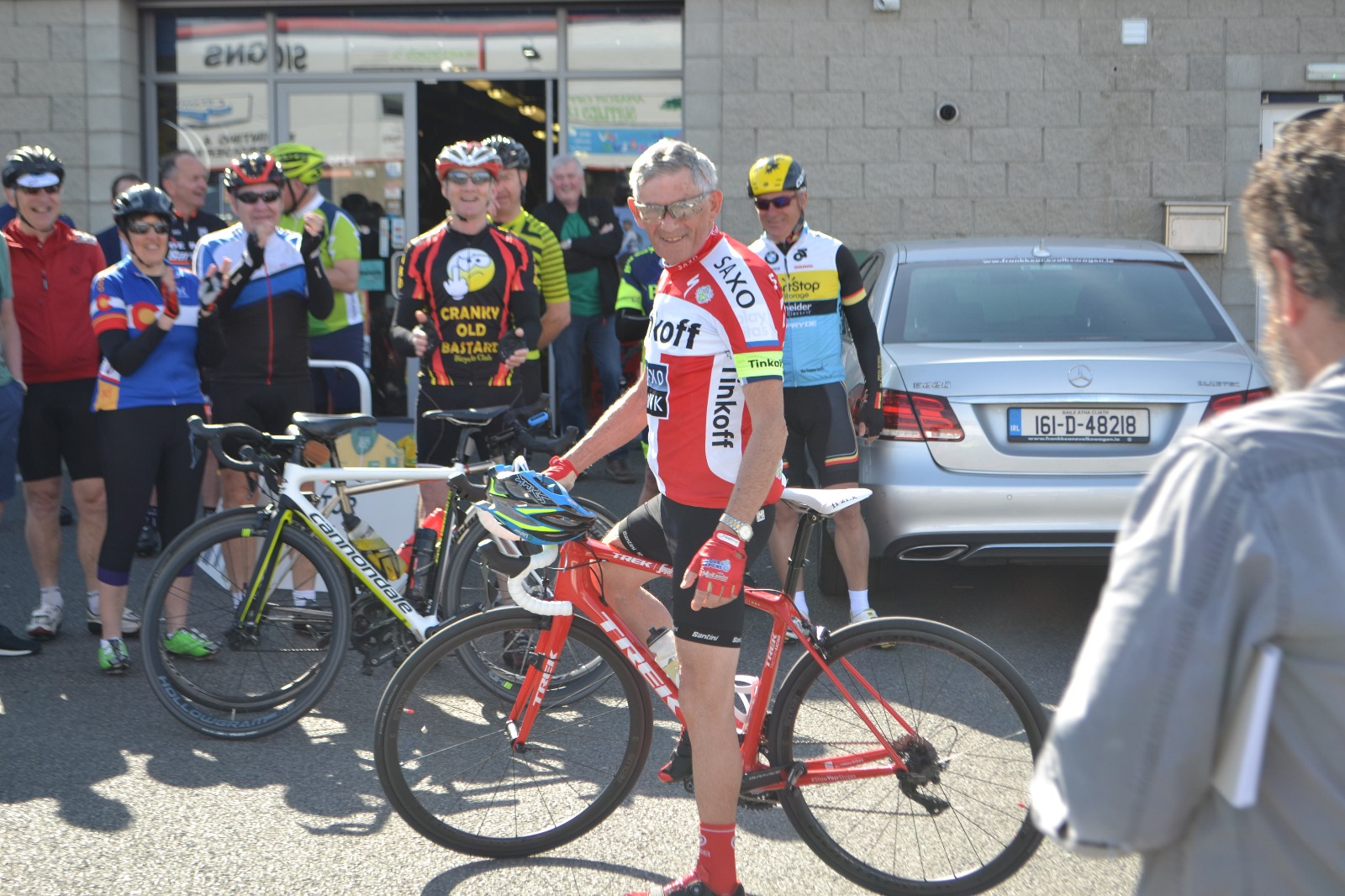 Liam gets ready to leave on his birthday cycle

“I was a very average cyclist,” he told this reporter, in a statement that would easily win the award for understatement of the week. Anyone who has completed the Rás once, let alone eight editions of the around Ireland race, is no average cyclist. His best place was 18th overall — the ninth Irish Rider.

Liam started racing in the late 50s as he recovered from a lengthy convalescence from a damaged ankle. “I was just trying to get fit again, and one day when I was out, I saw this group of cyclists and hopped onto the back of them.

“After a while, one of the fellows said ‘did you ever think of taking it up?’

“So eventually I joined them and rode my first race in ‘59.”

He raced for 25 years, starting in 1959. During his racing career he competed in eight editions of the famous Rás, regarded, even by professionals who train constantly as one of the hardest races to do in the world. And unlike today where the Rás takes eight days, in his time it was a few days longer. 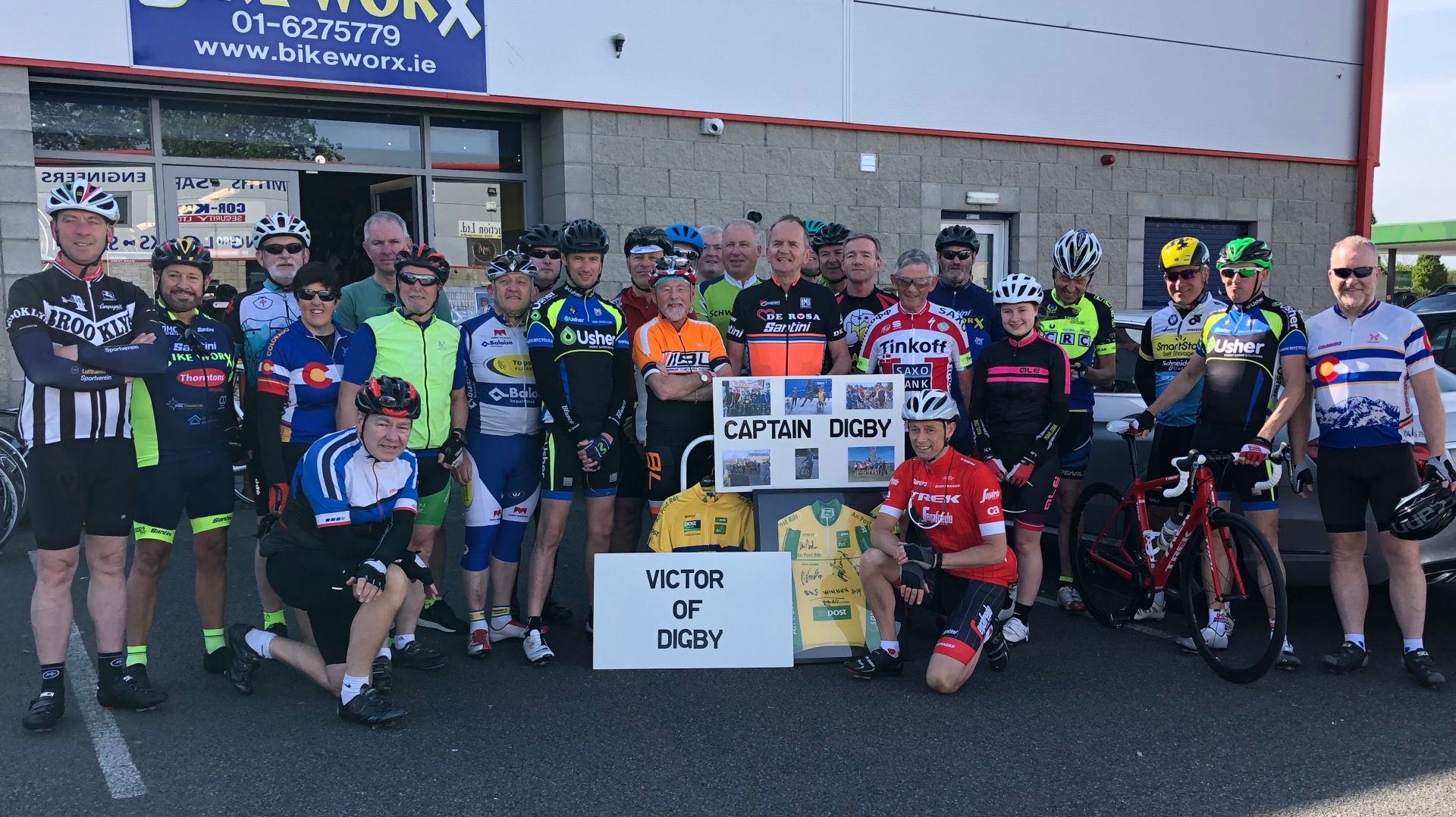 Liam (in Tinkoff top), with family members and his fellow Plonquers

Liam, on the other hand was working in the meat industry, for IMP Leixlip and then later with Kepak, trying to save for a mortgage and, with his life Lily, raising children. The couple met in IMP where they both worked. Liam was in the abattoir, )often starting as early as 4am. It was tough physical work, not conducive to a racing career.

Originally from Clonee, Liam moved to Maynooth in 1972. He represented Kildare, Meath and Dublin in the Rás over his time.

Throughout the years he would regularly cycle to Monasterevin from Clonee, take part in the race, and cycle back, often with a light on the front to get home in the dark.

“When I was racing I lacked a sprint, but I was good at finishing in the leading groups. Once guys get to know that you can’t sprint, if you jump away, say, coming near the finish, they’ll close the gap down and won’t let me go.”

He won many grass races, but although he appeared in the top 10 in many road races, he never managed to get to the top step on the podium.

He recalls cycling along beside Shay Elliot, and was on the same team several times as one of the Kildare greats, Paddy Flanagan, in the Rás. Flanagan won it in 1975.

He didn't cycle with Sean Kelly, although they did see him racing a few times. Liam does recall towards the end of his career being a race with Stephen Roche (who went onto the win the Tour de France, Giro d'Italia and World Championship in 1987). He admits he and his fellow racers didn't see much of the star after he showed them all a clean pair of heals.

"We knew one day he’d be good," Liam says. Lily points out that there were many racers who would have succeeded if given the chance, including Paddy Flanagan, Seamus O’Hanlon and Peter Doyle.

Liam’s life, and that of his family is steeped in cycling. Every weekend the family would travel to races, often as far as Munster or the North. In latter times, he and Lily have tried out all of Ireland’s greenways and say the Waterford one is the best. In 2012 he completed the famous Mizen to Malin route, and did it in four days — which worked out at over 100 miles a day. He was 75 at the time.

Summer holidays have revolved around getting a chance to see a few moments of the Tour de France or the Giro d’Italia. The couple are massive fans of Alberto Contador, who won the Tour de France twice, one of only seven riders to have won all three grand tours of cycling. 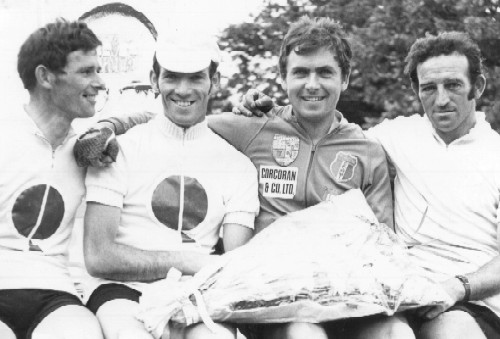 Liam, left, with Paddy (2nd from the left) and Ned Flanagan (right) with Carlow man Mike O'Donoghue in the 1973 Rás

“We’ve met him,” Liam says. “We didn’t speak to him other than to bid him the time of day and that’s it.

“He’s a smallish man, lightly built. That’s why he can climb.

“He has reasonably good English. We met him at a stage of the Tour de France.”

These days, Liam and Lily spend a few weeks every year in Italy on an easygoing cycling holiday.

Liam rides mainly with ‘Les Plonquers’, which he describes as an accumulation of lads, about 25 in total, who are mainly retirees.

“We do 75kms, and then stop for the coffee then. We’ll head as far as Newbridge or Trim, all sorts of places. Then sometimes we do longer spins. Last year we went to Navan, Athboy, Trim and back to Maynooth.

“We’ve gone to Slane, up and down the hill and then back to Navan. One time we did Maynooth, Batterstown, Dunshaughlin, Skryne, Tara and back to Maynooth.”

Lily recalls knitting Liam a tracksuit back in the day, but these days he enjoys the latest technology in lycra and bikes and has happily taken to clipless cleat pedals.

Of the many changes seen in cycling, he points to helmets as one of the best innovations.

“There were no helmets back then and it was the best thing ever for helmets to be brought in. The modern helmets nowadays are very good, whereas back in the day, the helmets just had a small ridge on them.”

The bikes have changed and are lovely, he says. Overshoes are particularly welcome for the keen cyclist. “We didn’t have them. And when you tightened the strap on your shoe, your foot was numb. It was terrible during the winter.”

Last Tuesday in Celbridge he joked that he wouldn’t keep going for another 80 years, but it’s safe that we’ll see Liam Cannon happily pedalling the roads for many more years to come.