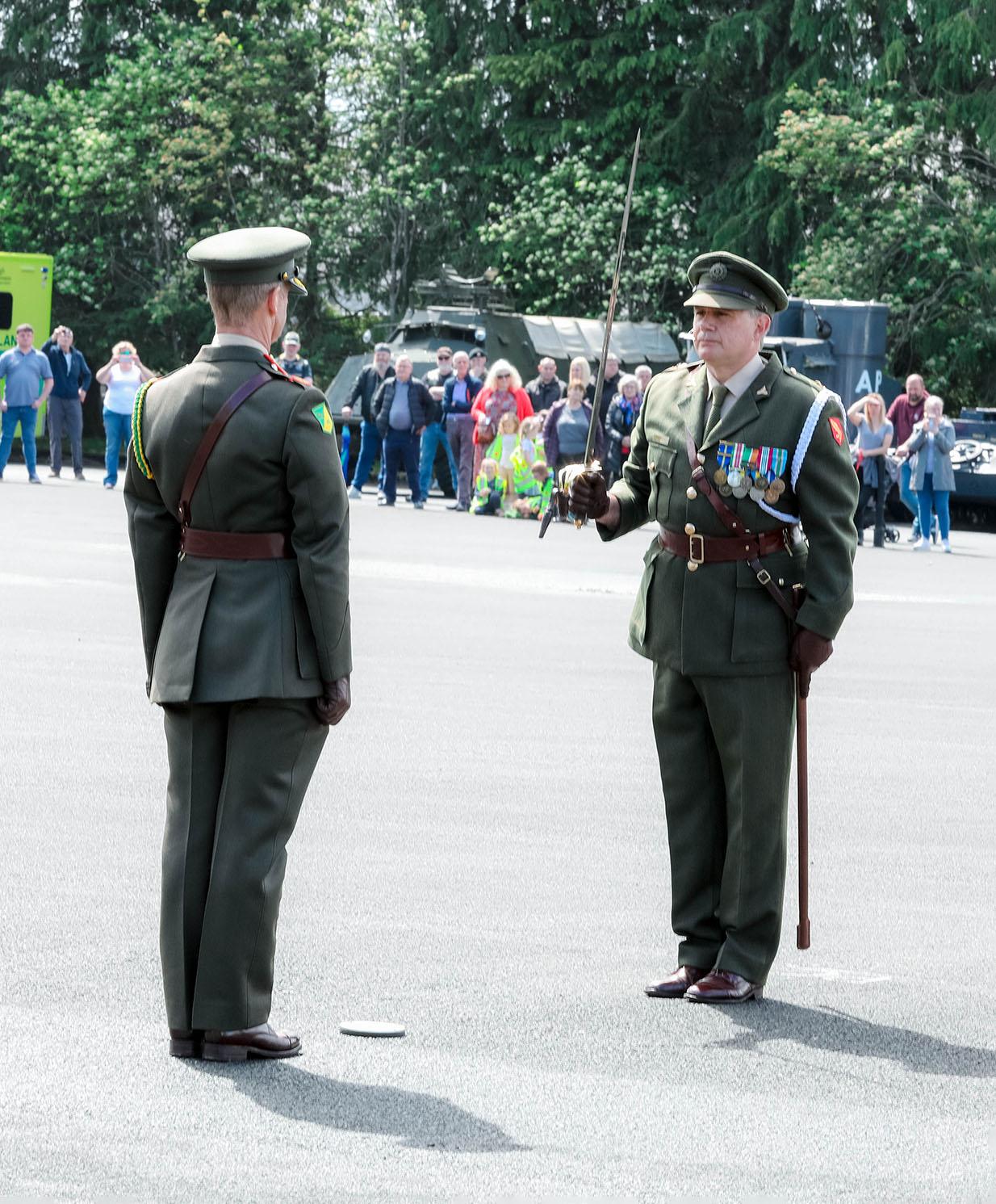 Hundreds of serving and retired Army personnel as well as members of the public attended a significant ceremonial event on Monday to mark the centenary of the handover of the Curragh Camp from the British Army to the Irish Free State Army.
At 10am on Tuesday, May 16, 1922, the Camp was transferred to a party of Irish troops commanded by Lieutenant General JJ ‘Ginger’ O’Connell.
Relatives of Lt Gen O'Connell were in attendance at McDermott Square to witness an itinerary of events to mirror the historic day 100 years ago.
The event began with an official address in the Main Barrack Square by General Officer Commanding Defence Forces Training Centre (DFTC), Brigadier General Brendan McGuinness.
At 12 noon, the national flag on the water tower was hoisted followed by the unveiling of plaques on the Curragh Fire Station building to mark the important centenary.
Music was provided by the Army No 1 Band who performed Amhrán na bhFiann before a fly-past of two Air Corps aircraft was carried out.
A lone piper then played the ballad, The Curragh of Kildare.
A reception followed for attendees as well as a military of Army vehicles such as the armoured "Slievenamon" car associated with the death of Michael Collins at the Beal na mBlath ambush in August 1922.
A local retired soldier who was born in the Curragh Camp, said he was delighted to be invited to the centenary ceremony.
Pat Lynch, who will turn 97 in July, told the Leader: "My father Pat Lynch Snr was serving in the Curragh after the handover from the British Army and he had living quarters here.
I was born here in 1925. I used to look after the Sliabh na mBan car. I was part of a group of people who helped restore and maintain the vehicle.
I would drive it to military display shows down the years.
Pat, who retired in 1990, now lives in Kilcullen.
Pat's son Noel also revealed that his daughter Emily also has a link to the car as she painted the lettering on the bodywork.
Noel said: "That's another generation of the family who is associated with Sliabh na mBan!"
Fourth-generation Curragh barber Fintan Darling, who was also present with his father Reggie, said it is important to remember the important history of the Curragh Camp.

Mr Darling said: "The history of my family over many generations is intertwined with the Camp and so it's an emotional day for my family today as well as a very important day for the Defence Forces."

Defence Forces personnel are involved in several local ceremonial events nationwide throughout this centenary year, involving personnel from the Army, Air Corps and the Naval Service.
Public representatives who attended Monday's event included Minister of State Martin Heydon, retired Army officer and TD Cathal Berry as well as other local politicians.
Pupils and teachers from schools in the Curragh were also invited to attend and witness the proceedings.