What's On column: Netflix story of drugs trials in a prison utopia 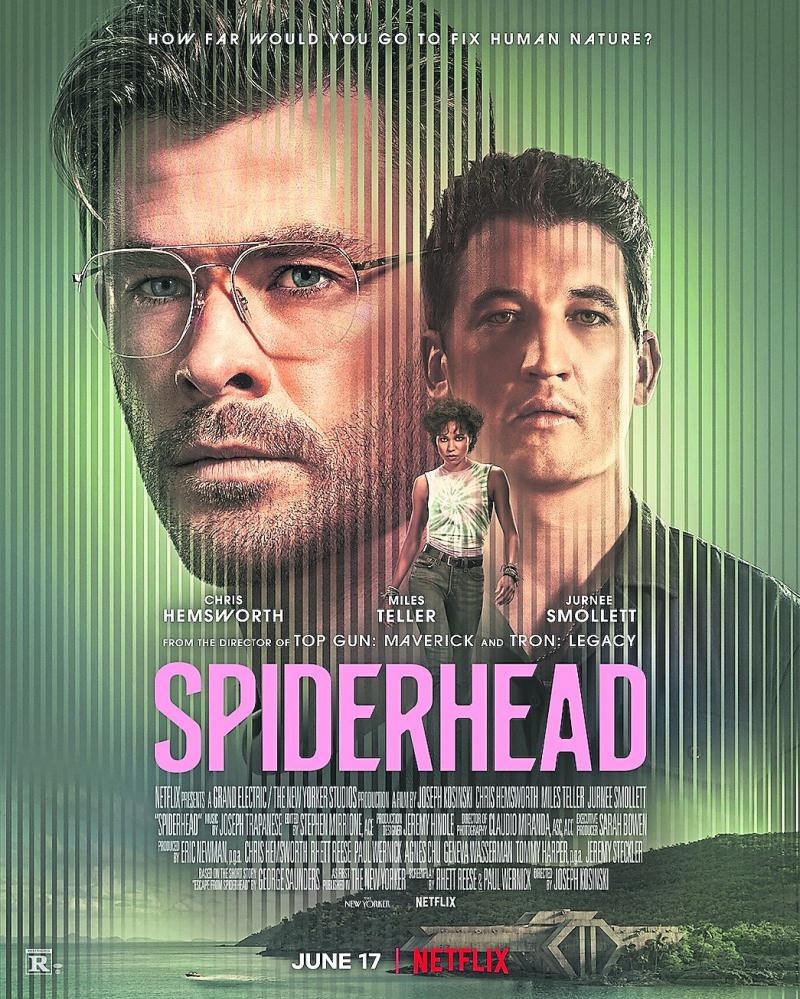 Spiderhead is out now on Netflix

‘No bars, no guards, that’s only possible in a collective of mutual respect’. That is the sales pitch of Chris Hemsworth’s character Steve Abnesti in Spiderhead, which was recently released on Netflix.

In the film, Abnesti is a sort of laissez-faire prison warden, who takes convicts into his charge in an isolated prison in a beautiful maritime setting. The prisoners can roam from room to room without lock or key and have much more freedom than they would in a run-of-the-mill jail.

We quickly discover, though, that being an inmate at this experimental facility comes at a price. Jeff (Miles Teller) is one of those incarcerated there, and the viewer watches, aghast, as he and other detainees are forced to test new and experimental drugs, in return for their ‘free’ reign in the facility. The cornucopia of substances that he and fellow prisoners are encouraged to experiment with range from N-40 (supposedly a ‘love drug’) to the mysterious B-6.

In each of the trials, the subjects are closely observed by Abnesti and his assistant Mark, who take notes and dispassionately observe the effects of the substances upon the inmates. It is clear that Abnesti views himself as a benevolent dictator, managing the lives of the participants in his research programme to the nth degree. As the plot develops and the experiments become increasingly brutal, it becomes clear that his true motivations are far from altruistic.

As Jeff is asked to perform ever more inhumane and unethical tasks, his loyalty to his former friend begins to wane and he starts to question the real purpose of the trials. After a particularly gruesome experiment where one of the subjects dies, Jeff gets access to Abnesti’s private documents and discovers the awful truth: his ‘friend’ is running the prison as a private fiefdom, his company stands to make massive profits from the drugs being trialled by the inmates, and the curious B-6 is actually an ‘obedience’ drug, which could be rolled out worldwide to make people more subservient.

This film is based on a short story called Escape from Spiderhead by George Saunders. On the face of it, the movie comprises an ensemble group of attractive actors, stunning scenery and a quality soundtrack. Like the short story it is based on, though, it also manages to pitch some uncomfortable questions to the viewer.

The consequences of the privatisation of the prison system have been debated for a long time (for more on this, Ava DuVernay’s excellent documentary 13th is a must watch). Spiderhead’s plot is essentially an exploration of the consequences of pushing this private model to the extreme, where free market capitalism is allowed to run riot inside correctional institutions. The result is a dystopian mess, which serves no purpose for the families affected by crime. Added to this, the ‘corrected’ emerge from the system more damaged than they were when they were first imprisoned.

The drug trials in the film are also a reminder of the infamous MKUltra programme run by the CIA in the 1950s and 1960s. Director Joseph Kosinski and the original short story writer Saunders will no doubt have been aware of this. For that reason, a patina of mistrust in the motivations of the authorities shows up again and again in the storyline.

This film is a bit gruesome at times, and given the complexity of the themes it explores, it is not long enough.

Having said all that, it is a decent exploration of the moral questions involved, with plenty of entertainment and humour thrown in for good measure.