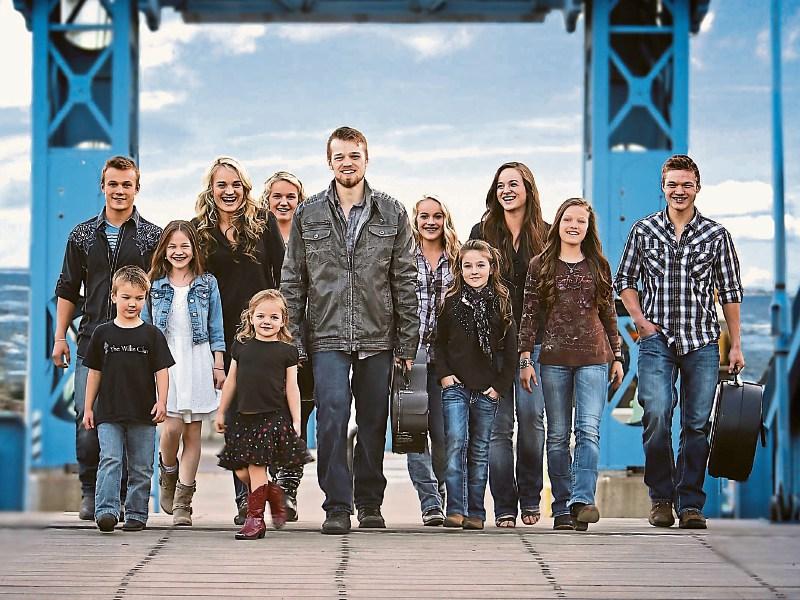 The talented Willis Clan from America will play the Clanard Court Hotel in Athy on Wednesday, June 15, at 8pm.

The 12 piece family band from Nashville, who have Irish roots, have been described as a modern day all singing, dancing and playing Von Trapp family.

At the helm in the role as 'momager' is Brenda Willis, who recently spoke to the Leinster Leader about their upcoming tour last week.

“We are very excited to be playing in Athy. Music is the one thing we do as a family although we each have our own interests outside of music,”she explained.

“Although both of my grandparents were born in Mayo and we loved Irish music, my family wasn't that interested in our Irish roots. My husband Toby was an Olympic wrestler and we knew we wanted a large family and we thought we would have lots of boys to wrestle with — in fact we have eight girls and four boys - so we started the girls Irish dancing and they loved it.

“It was only then that we realised the family connection.”

All the children, whose ages range from 23 to five and whose names all begin with a J, went on to study Irish dancing and music.

“We loved the name Jessica and so we called our first born Jessica and so the next one was Jeremiah, Jennifer, Jeanette, Jackson, Jedi, Jasmine, Juliette, Jamie, Joy Anna, Jaeger, and last but not least Jada.”

The fun-loving family shot to fame in the US a few years ago as semi finalists in the 'America's Got Talent' TV show. After that they were offered their own reality show called 'The Willis Family'. They captivated the nation with their musical talents and also with their back story, which was a tragic tale of young lives lost.

“My husband lost six siblings in a car accident 20 years ago,” she added. “My daughter has written a piece in their memory called 'The Road to Watertown,' which we play on tour.

“We also like to include lots of fun things while we are touring to keep a balance. While we are in Ireland we like to kiss the Blarney stone, see the Cliffs of Moher, visit Swinford where my family come from and meet some of my relatives. We really enjoy touring because we include a lot of fun things to do on tour.”

Their musical influences include U2 and The Corrs who Brenda says can be heard in their latest album.

“If you hear our third album it is very much Irish music first and Nashville second. Irish music has been such a huge influence on our kids.

“We were both keyboard players and we used to perform in our church but that was it. Then the kids started doing really well at Irish music and they got involved in local and Irish competitions and it took off from there. I now play guitar with the band but my husband Toby is now the sound engineer. We also like to play Nashville country music and blue grass and each of our albums have covered the different genres.”

Not only do they have their own Tv show but they also have their own jewellery line and when they tour Ireland they run their own private tour company for fans. Their 2016 Ireland Fan Tour is fully booked but they are planning on making this an annual thing.

“We really like to mix it up when we tour,” she added.

“We even bring fans with us. This will be our second time to play in Athy and we are really looking forward to being back.”

Tickets for the show can be booked from the Clanard Court reception desk (059 8640666 or reception@clanardcourt.ie) or from Winkles newsagent in Athy.