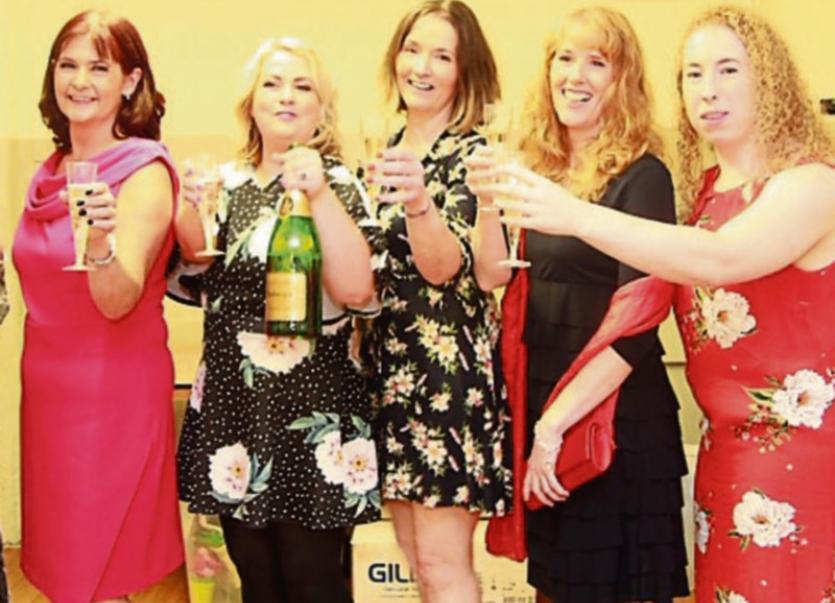 Some of the cast of Hens

You could say the hens have hatched.

Hens, a play written by Tom Noone, a playwright and teacher at Naas CBS, recently sold out its run in Monasterevin as it played a central role — no pun intended — in the revival of amaeur drama in the town.

The smash-hit play was performed to sell out crowds.

“When Tom Noone got involved he brought with him some expertise and a play which caught the imagination of the community,” said Colman Hynes, chairman of the Monasterevin Drama Group.

“Even in the build up we were having 20 people at our readings whereas before we had only a trickle of people interested in taking part,” added Mr Hynes.

The play sold out for five nights — one of which was devoted to the sponsors, whose support is vital to anateur drama anywhere.

Hens was performed in the community centre building and over four hundred people came to see this riotous comedy written, which was also directed by Mr Noone.

Rave reviews, roaring applause and standing ovations greeted the play which ran from January 25 to February 2.

Having a successful play and the involvement of the writer as the director and producer was a huge bonus to this inexperienced drama group.

All of the cast and crew and committee involved were new to drama, except for the well-known actor Tom McGrath. For the committee this was their first ever production and it was a remarkable achievement.

The writer and director Mr Noone was very impressed with all involved and some very talented people revealed themselves during this production.

“Tom McGrath is a fantastic actor and professional and so I was delighted he was involved but I was amazed at the talent of the new people especially, Esther Crowe and Sarah Pearce who looked like they had been treading the boards all their lives,” said Mr Noone.

The play is set in a fictional Irish town of Ballintroy in the present day and a group of women are planning a hen night.

But not all goes smoothly and there are a few things to negotiate. In the middle of all these hens is grandad Jack, played by Tom McGrath, the star of the show. Then there is the mother-in-law Helen, played by Esther Crowe whose performance had audiences almost crying with laughter.

Cast members Derek Sherlock, Tracy Fenlon, Jean Kelly, Jean Dwyer and Sarah Pearce all made their stage debuts and all excelled with memorable performances. The cast and crew brought the 90-seater theatre to life every night with a wonderful telling of this hilarious story.

The play has its origins in a story told to Tom by his mother about a ring being removed from a loved one in a nursing home for feat it would be lost — weaved into a tale of life, love and loss.

“We will have an AGM over the next couple of months and sort out where we’re going to go next,” said Mr Hynes.

Meanwhile Hens already being snapped up by other drama groups.And Mr Noone is planning a sequel which he promises will be even better.

“The sequel will be a play in its own right which means that you don't have to see Hens first.”