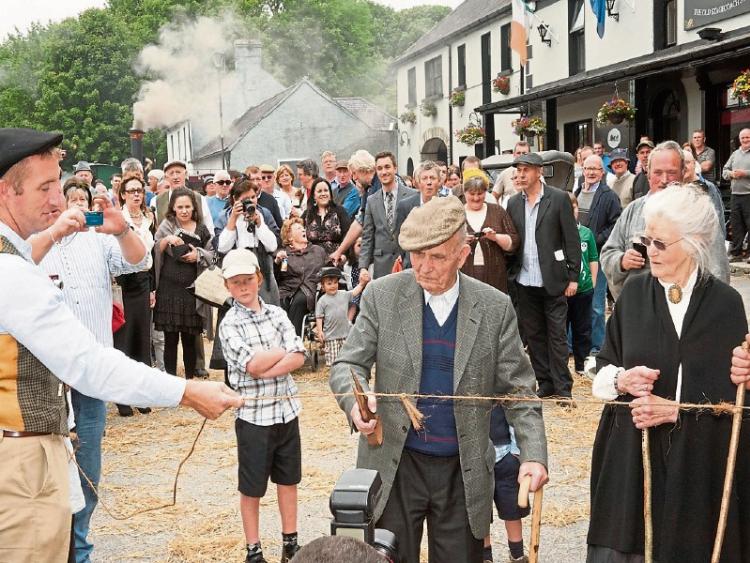 The Hollywood Fair takes place this Saturday and Sunday, August 10 and 11, and promises to be a fun-filled event for the big crowds expected.

The Fair celebrates the rich rural heritage of the West Wicklow area and people are being asked to add to the atmosphere by coming dressed in pre-1950s attire. Traditional crafts will be on display and there will be numerous stalls offering a huge variety of products and produce.

To start proceedings, on Thursday night, August 9, there will be a set-dancing/céilí night in the GAA Club grounds. Admission €10 includes refreshments and a great nights entertainment is guaranteed.

On Saturday, Bishop Eamonn Walsh will concelebrate an old-style Latin Mass in St Kevin’s Church at 6pm with local clergy. Dressed in pre-1950s attire the large attendance usually make their way by pony and trap, vintage vehicles, bikes and shank’s mare. After Mass, another slow-bicycle race is planned, which is followed by a dramatic re-enactment in an adjacent field.

This highlight on Saturday evening will be the outdoor re-enactment scene of the flooding of Poulaphouca lake in the early 1940s and the impact which this had on the local people who were forced to move. Afterwards there will be music on the stage in the village from 8.30pm.

The sheep and sheep-shearing competitions will be one of the highlights on Sunday.

There will be music and dancing on the streets and a variety of food and drink options will be available to satisfy every taste.

Organisers are expecting a huge turn-out on the Sunday, with numerous exhibitions of traditional crafts such as blacksmithing, stonecutting, wood-turning and butter making.

In recent years, the Fair has had almost 100 stalls selling wares and a similar number are expected this year.

Handicrafts being displayed and demonstrated include spinning, knitting and sewing. Among the items on display at the Fair are vintage cars and farm machinery.

You could also find love at the Fair as the renowned Lisdoonvarna Match-Maker Willie Daly will attend again this year. Another major attraction is the Sheep Show: competition for the various categories attracts intense local interest.

Entrance fee is just five euro with children under-12 free. This is the eighth Fair to take place since 2011 and it becomes increasingly popular each year.