Kildare IFC: Huge day for Ballyteague as they sail into Championship final with Caragh win 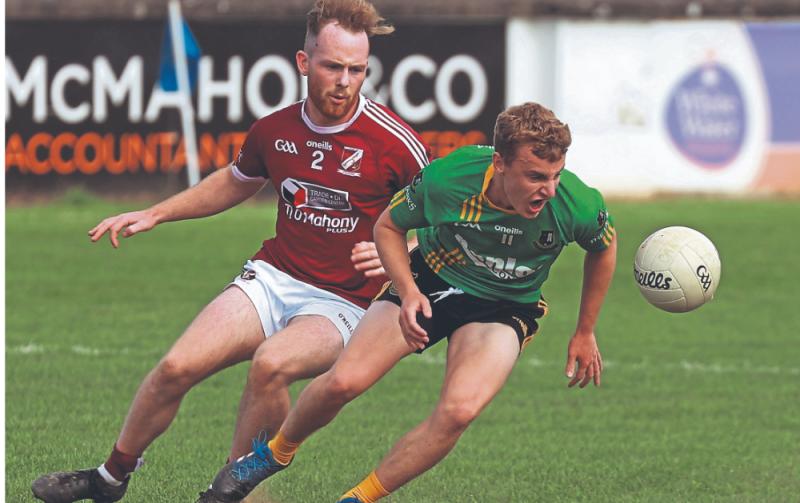 Ballyteague Fionn Murphy spins on to the loose ball ahead of Caragh Cathal McKennedy, Photos by Sean Brilly

The Larks are flying high, maybe higher than they could have expected but they are where they deserve to be following this five point victory over Caragh, and are now just 60 minutes plus from senior football.

On Saturday at St Conleth's Park they were always in control against Caragh and while they never really put the opposition away they nevertheless rarely looked they would succumb to Caragh's much improved second half performance.

Having said that it was a very disappointing display from the boys in maroon and they have to look no further than their forward division to see where they lose this one. Just one of their starting forward division, and that a point, found the posts with all the remaining scores coming from their midfielders Eoghan O'Haire and Kevin Connor.

As for Ballyteague, they put in a mighty shift, particularly in the opening half where they showed they were more up for this one, more committed in the tackle and time and time again Jimmy Hyland punished them with another five star display.

Coupled that with the exquisite foot passing display from Seamus Hanafin and the hard-working Fionn Murphy they simply had too much for Caragh.

The impressive Eoghan O'Haire, who has enjoyed a great championship. opened for Caragh before Jimmy Hyland leveled, quickly adding a second after collecting a short kick-out.

A fine three-man move saw Hyland add another with Fionn Murphy and Hyland again making it 0-5 to 0-1 after 14 minutes.
The writing was on the wall at this stage with Ballyteague winning all the big battles, winning the dirty ball and overall working their socks off impressively.

Kevin Connor got Caragh's second on 18 but there was no stopping The Larks, and while Stephen Ennis should have goaled points from Hyland (free), Cian Loughlin as Paraic Hanley emphasised the Ballyteague tenacity with brilliant blocks to deny Caragh.

Eoghan O'Haire hit a beauty, Glen Thorpe replied before Kevin Connor got one back for Caragh. Jimmy Hyland added a free as Ballyteague led at the break 0-9 to 0-4.

Caragh, no doubt after some stern talking at half-time, came out after the break and enjoyed their best period with points from O'Haire, and a fine effort from Jake Corrigan to reduce the lead to three.

Seamus Hanafin fired over, Jimmy Hyland hit a rare wide before he quickly found the range again making it 0-11 to 0-6 after 49 minutes.

Caragh certainly enjoyed more possession at this stage but some of their passing and shot selections were extremely poor as Eoghan O'Hehir converted a free after Jake Corrigan goal bound shot crashed off the crossbar.
Bit of handbags saw Eoghan O'Haire and Jimmy Hyland shown yellows by referee Brendan Cawley.

The next four points were divided evenly before Ballyteague, in another impressive quick break out of defence saw Jimmy Hyland fire over the final point of the game as The Larks won on a final score line of 0-014 to 0-9.

For a small rural club a mighty achievement by Ballyteague to make it through to the intermediate final. They had excellent support on the day and not for the first time had a host of youngsters shouting their support throughout the game.

Disappointment for Caragh, they never really got into it and as said initially their lack of firing power up front was probably their biggest downfall.

MAIN MAN
Jimmy Hyland
A few contenders, including Caragh midfielder Eoghan O'Haire, but it was Jimmy Hyland who put another great performance, not only his scoring which was top class but his overall contribution and work-rate were, once again, a joy to behold.

TURNING POINT
Not sure if you can all it a turning point but it was the start that Ballyteague got that put down the foundation for this deserved win. They opened like their lives depended on it and after about seven or eight minutes had Caragh chasing the game.

SCORE Of THE GAME
Ballyteague transferred defence into attack time and time again and did it impressively. One particular attack emphasised that in the second half when turning-over a Caragh attack through Brian McGrath, who found Tommy Callan, on to Jimmy Hyland — point, exquisite.

WHAT NOW?
Ballyteague into the decider against Sallins or Castledermot while for Caragh the season comes to an end.