Kildare SFC: Kirwan's brilliant double get Naas over the line in Celbridge semi-final 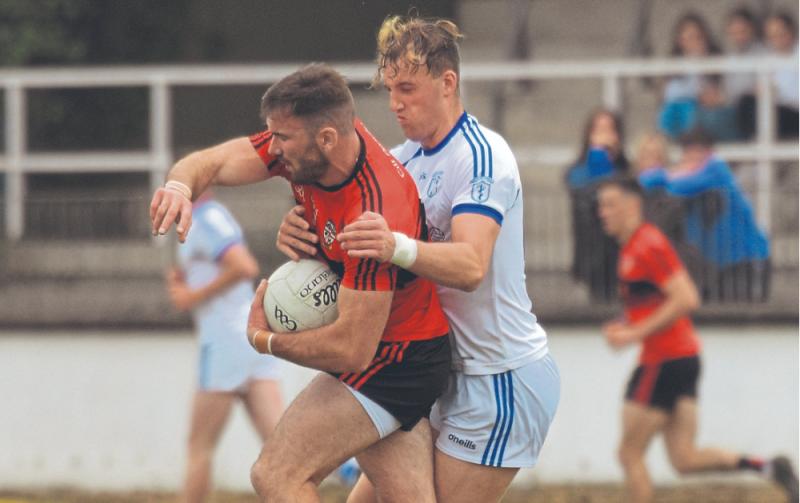 Naas are through to the final of the Joe Mallon (Renault) Motors senior football championship final following a three point win over Celbridge in a pulsating game at St Conleth's Park on Sunday afternoon in front of a fine attendance.
It was tight, tense and pulsating, the sides level four times in the opening half and shared just ten points equally in that opening half.

Level three more times in the second half before a magnificent goal from Darragh Kirwan finally gave Naas the edge and while Celbridge came back to get within a point, a second goal, late on — again from Kirwan — saw Naas finally get a winning grip on affairs.

Overall a great game and while Celbridge will look back, particularly to the opening half when they had a fair amount of possession but six wides, including three in a row in the opening quarter, did nothing for their cause, Naas were worthy winners after two brilliant strikes, particularly the first goal from Darragh Kirwan who up to that point was getting little change out of the tight marking Mick O'Grady.

A couple of early wides from both before Cathal Daly picked up a somewhat harsh yellow after three minutes while Celbridge had an early goal chance but Davy Hughes was quickly smothered up and the danger cleared.

Six minutes in and it was Alex Beirne who fired over after receiving a pass from the impressive Paddy McDermott and while a Davy Hughes free had them level on seven, Naas took the early initiative with points from Ciaran Doyle (set up by Eoin Doyle); and Eamonn Callaghan free after Alex Beirne was fouled.

James Burke made a brilliant block to deny Davy Hughes but Celbridge getting a bit of a grip around the middle hit three successive wides on the trot.

A great move involving Paddy McDermott, Brian Kane, Darragh Kirwan and Dermot Hanafin, ended with the impressive Hanafin getting the first of his four points from play to open a three point gap, 0-4 to 0-1 as we reached the mid-way point of the half.

Celbridge were using the long ball in to Paddy Brophy time and time again and while it took a while to reap any dividends it did eventually when the former county man hit two points inside two minutes and when he added a third, from a mark, the sides were level at 0-4 apiece on 19 minutes.

Naas were finding it difficult to break down Celbridge who had 15 men behind the ball at all times, and then breaking at speed when in possession, and that certainly required the champions to be ultra patient, something they did well.
Celbridge eked out a goal chance on 22 minutes, Kevin Flynn setting up Hugh McGrillen but the former county stalward's shot went high and over to give Celbridge the lead for the first, and only time in the game, 0-5 to 0-4.

Two minutes later and the sides were all square again, this time a high ball was caught by Dermot Hanafin who turned and fired over.

A great tackle by James Burke saw him dispossess Kevin O'Callaghan, getting the ball into Eamonn Callaghan who was fouled but for once Callaghan missed the posts with his free as the half-time whistle arrived the sides deadlocked at 0-5 apiece.
A pulsating opening half, with Celbridge making it extremely difficult for Naas with their men-behind-the-ball tactics while they (Celbridge) probably felt they could have been a few points in the clear at that stage.

Luke Mullins cleared a dangerous ball from his area before Dermot Hanafin fired over his third of the game but inside a minute they were level again, this time Paddy Brophy benefiting from a brilliant kick-out from Shane McNamara to fire over.

Alex Beirne had Naas back in the driving seat before a foul on Paddy McDermott on the 45m line, one stride from the sideline saw Luke Mullins hit a brilliant free that fell just short, was dropped, with Alex Beirne just failing to get a boot to the lose ball.

Hugh McGrillen who worked his socks off up and down the wing, cut inside, centred with a fist pass but Eoin Doyle made a brilliant flick as a Celbridge forward was about to punch to the net.

On 42 minutes the sides were level again with Paddy Brophy again raising a white flag, this time a high hanging ball getting over.

Two yellows from the same incident saw Kevin O'Callaghan and Fergal Conway in the book before a brilliant free from keeper Luke Mullins saw Naas back in front.

Fergal Conway, who had a great game throughout, leveled up again on 47 before the turning point arrived.
A great move involving Paddy McDermott, Kevin Cummins (just on) McDermott again, and then to Darragh Kirwan who hit a screamer low and hard to the left hand corner of Shane McNamara's goal, from some 25m to push Naas three ahead.

Fergal Conway replied with a point; a brilliant pass from Darragh Kirwan set-up Dermot Hanafin and when Eamonn Callaghan converted a free Naas now led by four — 1-10 to 0-9.

Aaron Browne pointed (a score that looked over the post by most in the stand), a Paddy Brophy free and another from Browne had the lead back to a single point with 58 on the clock.

The excitement was at fever pitch at this stage with the game firmly in the balance when a miss-placed kick pass out of defence went to Tom Browne, who found Dermot Hanafin, in turn to Darragh Kirwan who hit another screamer to the back of the Celbridge net

Another bit of magic from Kirwan who had been marshalled brilliantly by Mick O'Grady but it was the Naas man's two brilliant strikes that proved the difference.

Paddy Brophy and Kevin O'Callaghan reduced the lead back to two but it was Eamonn Callaghan, from a fine cross field pass who split the posts in the 63 minute to finally end the Celbridge brave challenge as the final whistle arrived, Naas winning by three — 2-11 to 0-14 — after a top class game that was in the melting pot right up to the end, with Kirwan's goals proving the difference.

Naas manager, Joe Murphy, in this his first season in chage of the boys from the county town, admitted after Sun-
day's semi-final win over Celbridge that “it was very tough game, a great game to win” adding “Celbridge are a very good team, an experience team and they put us to the pin of our collars.

“The last two games have not been good for the heart but it means a lot more when you have to go to the depths to dig deep and we did that today.”

Murphy admitted that his side were under a bit of pressure prior to Darragh Kirwan's first goal.
“We would taken a point at the time, he was a bit of a distance out but it was a goal on his mind and it was some execution of a finish, it was the turning point of the game, the difference in the end even if he did get another afterwards.”

The manager said he felt, and they spoke of it at the break, “a lot of our own unforced errors were putting us under pressure, we were carrying the ball into the tackle with big men, were getting turned over, they were very quick on the counter but they had their defence tightly packed, with everyone, and we had to show even more patience in the second half; we still made a lot of mistakes and we still have a lot to work on before the final but we found a way through and that is what good teams do.”

HIGHLIGHT
Overall it was an absorbing game, Celbridge getting XV behind the ball but using the long ball tactic, especially in the opening half, to Paddy Brophy. Naas on the other hand recycling and recycling showing great patience.

LOWLIGHT
Celbridge probably would say their failure to convert first half chances along with a couple of goal opportunities but in the end little between the two sides wide counts.

TURNING POINT
No doubt, Darragh Kirwan's opening goal, brilliantly set-up with quick decisive passes and then a finish that was good enough to grace any level, club or county. And when once considers that Kirwan had little impact at that stage of the game, yet still had the confidence, the belief and the execution for a goal that will be recalled for many a long day.

MAIN MAN
A few contenders. For Celbridge Fergal Conway had a mighty game as had Paddy Brophy and the hard-working Hugh McGrillen.
For Naas, Eoghan Doyle was sound, Paddy McDermott impressive, Dermot Hanafin another top class game but Darragh Kirwan's two goals gets him the accolade.

REF WATCH
The man in the middle was Kieran Harris who had an excellent game, not over fussy, doing his job without any drama and getting all the big calls spot on.

WHAT'S NEXT
For Naas it is back-to-back senior finals, a major achievement by any measurement as they now await the winners of the second semi-final, another great game in prospect, as Athy take on Clane this Saturday, against in St Conleth's Park.
For Celbridge the season ends, but while they came off second best, they certainly showed that on their day they can be a force to be reckoned with and if they can built on this, will be back again in 2023 seeking that much coveted champsionship victory.