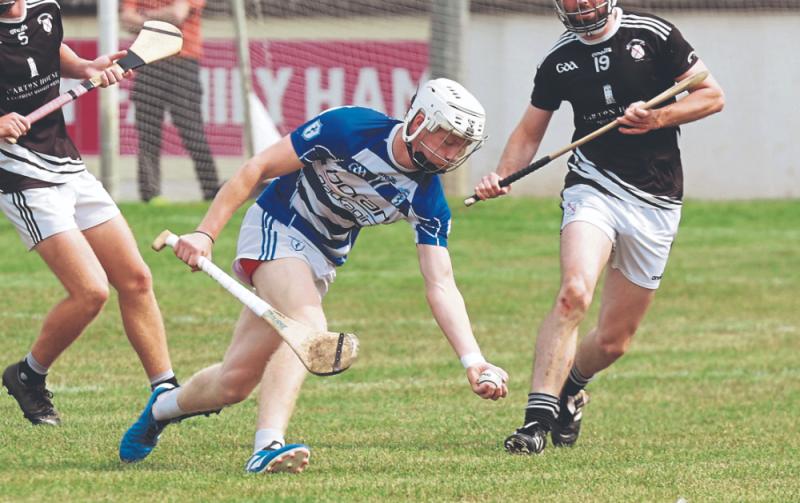 Before the draw was made, before a drum was rolled and before any challengers of merit emerged, Naas, were fancied to go all the way.

And it is not too difficult to understand why.
This season there was something like a dozen from the county town team involved, at some stage, with David Herity's county squad, that alone gives an indication of the strength of the champions who will be hoping to make it senior title number ten.
Maynooth, after threatening over the last few seasons to break into the senior ranks, finally got their deserved senior ranking this year, having bagged the intermediate title in 2021.

And boy have they hit the senior grade with a vengeance.
They were not expected to make it through a semi-final against Celbridge and while Celbridge may not be the side there were in previous years — remember they gave Naas one hell of a fright in the 2021 decider — they were expected to set-up another tilt with Naas.

But Maynooth showed great resilience, show great hunger (as one would expect) and great tenacity.
Under manager Tom Walsh this side don't do panic, on more than one occasion they looked to be edging towards ending their 2022 season in the semi-final but they dug deep, in fact very deep, and when the pressure came on, when the vital frees needed to be converted, when the vital score(s) were required it was the boys in black and white who came up with goods.

That semi-final was close all through, two between the sides at the break, Celbridge with the advantage, but there was at no stage more than three points separating them and anytime Celbridge looked like they might put a bigger gap between the sides, Maynooth responded and responded impressively.

David Qualter, was coolness personified, firing over some vital frees at vital times, Cathal McCabe has enjoyed a great season in the white of Kildare and is one very talented player while Colm Nolan hit a couple of big points on the day.
Strong at the back, Matt Eustace at no. 3 and Fiachra Lohan at centre half back with Graham Kenny and Harry Dunne putting in big shifts around the middle.
And what of Naas?

Well, just like their footballers, they are turning up, racking up some impressive scores, while keeping things tight at the back.
Cormack Gallagher is as good a keeper that is around. In the absence of the injured Richie Hogan, Conan Boran steps in at the edge of the square without any fuss.

The Naas half-back line of Kevin Whelan, Sean Gainey (in the absence of Ross Kelly) and Harry Carroll are hurling exceptionally well at the moment while Simon Leacy and Rian Boran have few equals around the middle.
But it is up front where Naas really have impressed once again this season.

James Burke, whether in midfield or up in the top third of the pitch, is a class act, an accurate free taker and much more besides; he hit ten points in the semi final while Cathal Dowling caught the eye again against Clane.

Jack Sheridan, well there is only one, a talented player capable of anything, free taker, side-line cut expert and if lining out at the edge of the square, will pose major problems for any defender.

Brian Byrne may not have got his name on the scoring sheet in the semi-final but he still had a major influence, himself and first cousin Jack Sheridan have a great understanding and time and time again each can pick the other out that more times than not ends up with a score.

Charlie Sheridan is getting more and more game time this season and he is one if he doesn't start is more than capable of coming off the bench, amongst others, and making an impact, definitely a player to keep an eye on for the future.

What Naas have achieved in the last three years or so has been phenomenal and while they have just two dual players in James Burke and Brian Byrne, these are two players who are talented, committed to the cause, and fingers crossed, have avoided any serious injuries, despite being big players with Kildare but lining out week-in and week-out with Naas, let it be football or hurling.

So all in there is little doubt that Maynooth face a big, big task and that's for sure.
Can they cause what would be a major, major shock on Sunday?
Of course they can.

They come into this final with no real expectations; no pressure; fully relaxed and no doubt extremely well prepared.
Naas on the other hand, have been here, done that, wore the jersey and really look so good at the minute.

Tom Mullally is a no nonsense hurling manager; he has been around the block and knows his hurling. On the outside at least he seems very relaxed, knows how to deal with players which is vitally important when you have so many talented players as he has on his panel.

In a final anything can happen; upsets in sport are ten a penny and this final on Sunday is no different.
But still, going on form, going on experience, going on what we have seen todate and over the last few seasons, it is impossible to look beyond the county champions, the Leinster champions and the All-Ireland Club champions that Naas are.
And remember when these sides met in Round 3 of the Group stages, Naas won by no less than 27 points.

That is the task facing Maynooth but if they can hang in; keep that green flag undisturbed beside Sean Bean, then who knows, but taking everything into consideration impossible to see anything but a resounding win for Naas.