Kill put down Kildare JFC marker with win over Athgarvan 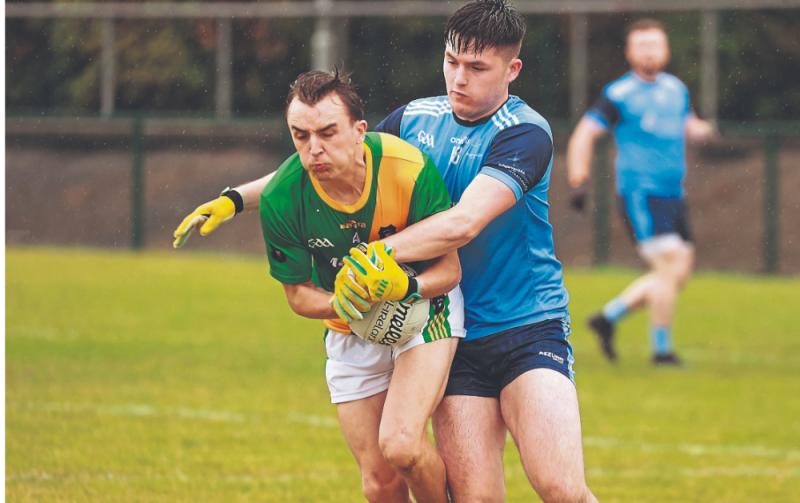 As the long awaited rain arrived it was Kill who adapted best to the conditions and ensured a place in the semi finals of the Tom Cross Junior Football Championship.

The opening quarter saw Kill open up a four point advantage courtesy of three from Paul Kirwan and an superb left footed effort from Cian Lawlor. Cian Doyle,from a free, opened the Athgarvan account and Cillian Smith's free on 16 was all they could muster for the opening half. Dara Challoner kicked a point from 40 metres to leave it 0-5 to 0-2 after seventeen minutes.
Solid defensive work from Kill and the ability to transfer the ball at pace into the danger areas caused the men in blue all sorts of problems.

With five minutes of the opening half left to play Kill had moved nine ahead.Cian Lawlor with his second,Paul Kirwan with three more,two from Kevin Corrigan and a lovely left footed effort from Alan Wren.Any aspirations Athgarvan had of a comeback were firmly squashed on 28.Kevin Corrigan's long ball found Paul Kirwan he quickly transferred to Alan Wren and he easily raised the first green flag of the game.

Paul Kirwan kicked his sixth right on half time to leave it 1-12 to 0-2 after thirty minutes.
The introduction of Alan Sourke and Cian Butler at half time helped raise the Athgarvan effort in those early stages.Cian Butler his brother David and Jordan Nolan Mullally all hit early points to raise the hopes of Athgarvan.They did squander good chances over the next five minutes and although it took Kill eleven minutes to respond they hit four in a row.

Second half sub Gary Moran kicked two with Alan Wren and Karl Lennox adding one each.The closing twelve minutes failed to yield another Kill score but with a fourteen point advantage they had done enough.Cian Butler, Cian Doyle and Cillian Smith hit three late frees for Athgarvan but as the heavy rain ended so did Athgarvan's interest in this years championship.

Kill were impressive throughout and although Athgarvan came into the game on the back of four group game wins this was a totally different test.

Kill will have an eye on the big prize and based on this performance they have every reason to be confident.