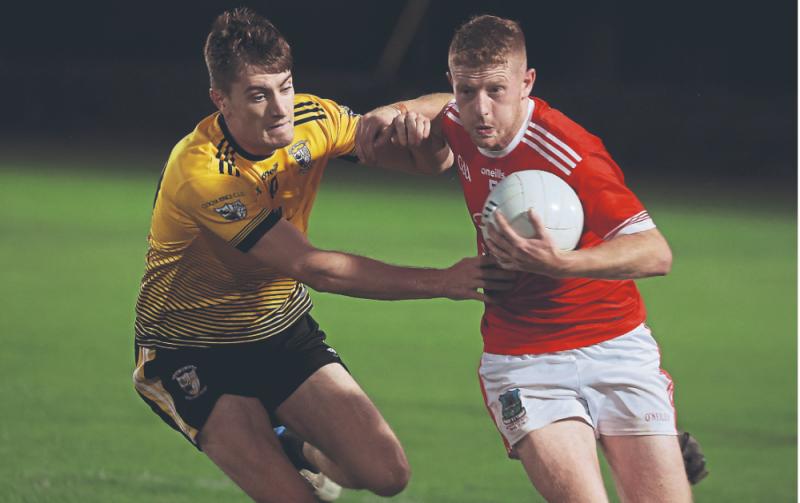 Athy are through to the last four of the Joe Mallon (Renault) Motors SFC with an impressive display against Clogherinkoe at St Brigid's Park, Round Towers headquarters on Friday evening.

On a extremely well prepared surface, despite the long dry spell, a decent crowed enjoyed a very open game that saw Athy dictate the play and while it was not until the second half before they finally put their opponents away, nevertheless Athy will be more than satisfied with their display, their win as they set up a date against Clane in the semi-final.

Without the services of the injured Kevin Feely, the winners still dominated the midfield battle, won the majority of the Clogherinkoe kick-outs, Paschal Connell and Sean Bride were dominant; Niall Kelly, Conor Doyle, Kieran Farrell and the hard-working Barry Kelly, all played to the top of their games throughout.

Cein McMonagle had a fine game, Jack Robinson did not get the supply that he has heretofore while Aidan Boyle, at wing back, certainly caught the eye with a top class display, capped by a brilliant late point.

Clogherinkoe took the lead when Cein McMonagle found Michael Barea inside and the corner back made no mistake from close range to lead 1-1 to 0-1, nine minutes on the clock.

Athy hit four wides on the trot before Paudie Behan found the range with David Hyland hitting two points inside 40 seconds to level up matters.

Jack Robinson was fouled and Cein McMonagle regained the lead for The Cloghs.
Athy upped their game with points from David Hyland, James Eaton and Niall Kelly (free) to open a two point lead on 18 minutes.

Jack Robinson (free) reduced the gap but Niall Kelly replied with a similar score as Mark Grehan picked up a yellow.
Clogherinkoe leveled on 27 minutes but Athy finished the half strongest adding four points to lead 0-12 to 1-5 at the break.

Early points were exchanged before Jack Robinson picked up a yellow after showing his displeasure at not being awarded a free but Athy slowly but surely pulled clear and by mid-way lead 0-16 to 1-7.

The game was effectively put to bed on 51 minutes when Darren Lawler found Sean Bride who made no mistake finding the net to lead 1-17 to 1-8.

Kieran Farrell added goal number two; Mark Hyland another one late on as Athy won comfortably, even if the final score line is somewhat harsh on the Clogherinkoe effort..