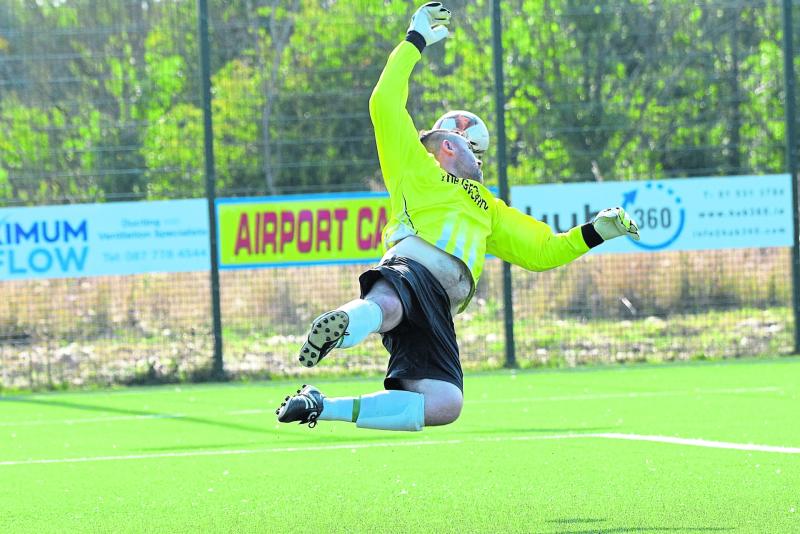 Both teams took to the field with players missing from both sides and 30 degree heat. Water breaks were a must.
Kilcock tipped off the game and were on the attack but were stopped by some good defending by Leixlip’s Vinnie Dalton who was playing in a new position due to injuries. Leixlip’s Niall Gouldsbury playing in the right side of midfield drifted into the centre and a through ball from Glen McCabe found him with just the keeper and defender to beat. Niall held off the defender to slot the ball into the net. 1-0 to Leixlip

Both sides battled it out in the midfield with Leixlip midfielders Dave Byrne and Graham Keirsey, who only returned form holiday that morning, making darting runs behind the defence causing problems for Kilcock defenders. Leixlip continued to attack with changes going to player manager Declan Donnelly who blated over the bar from 10 yards out. The water break was welcomed at that stage.

Kilcock continues to press for an equaliser and won a free kick on the right side which resulted in a corner. From the corner Kilcock fired in a fast-paced kick from Richie Neville following good work from Rory Gilsenan which glanced of a Leixlip defender across the goal before a Kilcock forward headed a looping header back across the goal beating Terry Cassidy in the Leixlip goal.

Leixlip continued attacking after the equaliser with a mixture of some great one-two play in midfield and goalkeeper distribution setting up attacks. A break down the left-hand side, Glenn McCabe squared the ball across to Shane Stone to slot home before a defender deflected the ball for a corner. From the resulting corner Shane Stone crossed and Niall Gouldbury head wide.

David Allen and Davey Byrne continued to make tackles in the defence allowing Graham Keirsey to push forward. His run around the 30minute mark from a pass from Glenn McCabe saw him shoot using his left foot only for the Kilcock keeper to make a fantastic fingertip save. Both sides continued to attack with both set of defenders standing up to attacks before the half time whistle and a well-earned water break.

Both sides continued the second half just as the first even in high heat and humidity conditions. Some nice play down the left with Leixlip’s Al Scott and Glen McCabe allowed for a defence splitting pass to find Niall Gouldbury breaking the offside and holding off the last defender to slide the ball pass the Kilcock keeper.

The 2nd goal did not put Kilcock off and they continued to battle all over the pitch. Kilcock pressed down the right but an interception by left back Al Scott.

Kilcock then switched sides and attacked down the left with a cross into the box which was cleared by Mark Barron. Mark and his defensive partner Vinnie Dalton blocked out another attack before the ball eventually made its way to Leixlip goalkeeper. Leixlip goalkeeper distribution in the day was ion point and pass out to the left gave Leixlip another chance to attack with Davey Byrne running onto but the Kilcock defence clearing the danger.

With Kilcock pushing for an equaliser, Leixlip played some lovely one-twos ion the left before Glenn McCabe passed again to the on-rushing Niall Gouldsbury and he finished well completing his hat-trick.

The final whistle came with both sides continuing to play football to the end as they started. Both sets of players shook hands and congratulated each other and the referee for a great game. Next up for Leixlip is a home game against Arlington in the Masters Shield.

Best for the winners were Glenn McCabe, Niall Gouldsbury and David Byrne while best for Kilcock were Rory Gilsenan, Rob Stanley, Paul Doran and Ciaran Tigue