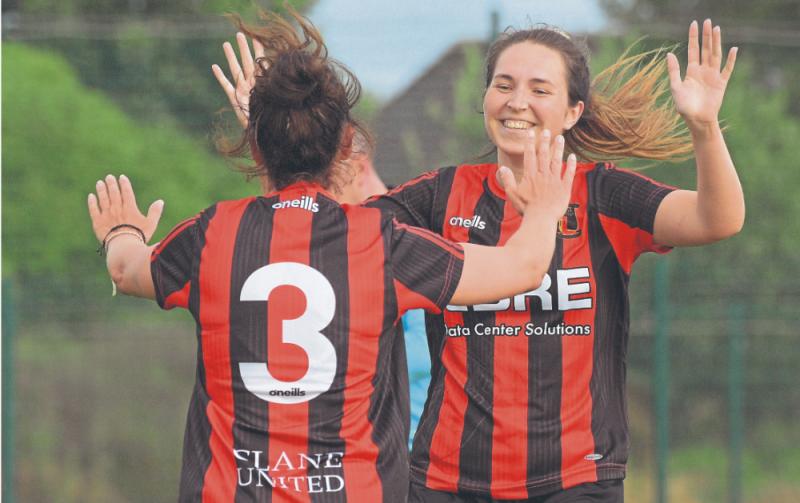 Clane United cruised into the Semi Final of the So Fresh Entertainment womens Cup on Monday evening at Doctor’s road following their comprehensive victory of a youthful Edenderry Town side.

On a fine evening for football weather wise, Clane United exploded from the blocks scoring two goals within the first six minutes. The first arrived almost directly from the kick off with Molly Nason splitting the Edenderry defence for Rebecca Devine to expertly finish past Fiona Darby in the Edenderry goal. On six minutes Clane doubled their lead when Nason pounced on some hesitation in the Edenderry backline to score into the bottom corner.

Edenderry settled into the game as their captain Alicia Kavanagh started to get a grip in the middle of the park and Drew Moss caused some issues for the Clane backline forcing a smart save from Clane net minder Kat Davis. As they continued to press forward, Clane continued to look dangerous on the break and the lively Devine crashed a shot from long range off the crossbar on 18.

Edenderry’s forwards continued to press forward and Aoife Tyrell forced a smart save from Davis as the game opened up. Clane extended their lead against the run of play on twenty four minutes when Devine and Nason reversed their roles in the first goal with Nason producing a beautiful finish to make it 3-0.

Despite this setback Edenderry continued to play some excellent football, with Mandy Fleming to the fore for the visitors. Fleming’s direct style produced a great battle with Rebecca Philips at the heart of the Clane defence and both saw yellow as passions rose to the fore as the half wore on. Edenderry got their just rewards for their dominance towards the end of the first half when Fleming expertly finished from a free kick on 37 to make it 3-1.

However on the stroke of half time Devine scored a stunner from twenty five yards to get her second of the night and leave the half time score 4-1 in favour of the hosts.

The second half began as a much tighter affair as midfielders Maria Healy for Clane and Kavanagh for Edenderry dominated the exchanges. Both managers ran the changes on fifty five minutes, and a minute later good work down the left hand side by Heather Meagher released Racheal Anderson in the Edenderry box and she coolly slotted the ball with her first touch of the game to make it 5-1.

A dominant Clane pressed forward in search of more goals and on fifty nine minutes Sarah Byrne broke the offside trap and forced a smart double save by Darby. From the corner, Byrne flashed a header just wide of the target. Clane’s new floodlights were turned on just after the hour mark to brighten this entertaining game even further.

Edenderry to their credit continued to play quality football with Coleen Brereton and sub Sarah McNelis impressing, but Clane were much more clinical when the chances presented. Devine, seeking her hat trick, hit the crossbar again from long range on 68. United’s sixth goal of the evening arrived with fifteen minutes remaining when the impressive Meagher scrambled home from a Nason corner. Edenderry pressed in the final ten but Clane’s defence held firm to see them home with the final score 6-1.