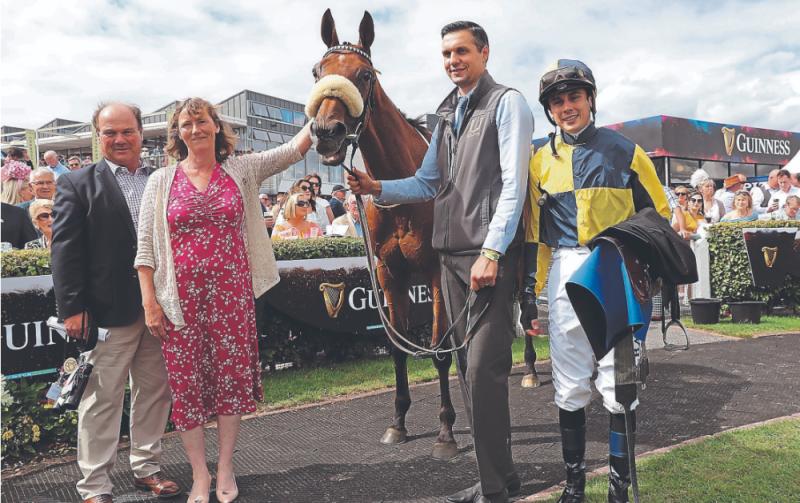 The nine-year-old’s owner Peter Newell passed away only hours before the race with Halford saying, “I hope it helps lift the spirits of the Newell family. Peter was a great supporter of ours and she’s the best animal they bred in all their years breeding. She's very special to them and we’ll have to mind her and put her first at all times.”

The 10/1 chance repeated her 2019 success in the seven-furlong event when leading in the final strides to deny the Dermot Weld trained Emile Gray by a neck, her 11th career success.

Jessica Harrington made a flying start to the 2022 Galway festival where she shared three winners with Shane Foley on Monday evening. She won the two-year-old maiden with 2/1 chance Pivotal Trigger which made all the running and readily got the better of the Dermot Weld-trained 8/11 favourite Tiverton by a length and a half.

In the colours of the Sniper Alley Syndicate, Dairerin took the three-year-old handicap over the same seven-furlong distance to give the pair their second winner. The 9/2 shot led well inside the final furlong to beat Andy Slattery’s Bells On Her Toes by a length and a quarter.

It was far tighter as Irish Lullaby completed the treble when just touching off the Joseph O'Brien-trained Common Practice in the 12-furlong handicap. The 13/2 chance led in the final strides to pip the well-supported 15/8 favourite by a head.

Enniskerry, owned and trained by Barry Connell, ran out a hugely impressive winner of the two-mile two-furlong beginners’ chase at Galway on Tuesday evening. On his first start over fences, the 8/1 chance jumped to his left but made all the running under Sean Flanagan, pulling clear well inside the final furlong to beat the Joseph O'Brien’s even money favourite Midnight Run by a comfortable six and a half lengths.

Dermot Weld landed the seven-furlong fillies’ maiden with the newcomer Tahiyra, a half-sister to Tarnawa. Ridden by Chris Hayes, the well-supported 7/2 chance led over a furlong from the finish before racing away to win by five and a half lengths in the colours of HH Aga Khan from the Aidan O'Brien trained 5/6 favourite Dower House.

Gavin Ryan, the leading Flat jockey at the Galway festival in 2020, completed a double on the day as he won the concluding handicap over the extended eight furlongs on the Mark Fahey-trained Clear Quartz.

The Jean Bird-owned 15/2 shot came home a one and a quarter-length winner from the Charlie Moore-trained Turbine. Ryan had won the earlier seven-furlong maiden on Pat Murphy’s Coreman.

Peter Fahey and Kevin Sexton won the mares’ handicap hurdle at Galway on Wednesday with Outback Flyer. Owned and bred by Jonathan Deacon, the six-year-old was pushed wide into the straight by the Rachael Blackmore-ridden Tullypole Annie and while both horse jumped the final hurdle side by side, the Kildare raider, at odds of 11/1, was soon on top and raced clear to win by three and a quarter lengths from her Peter Flood-trained rival.

Seamie Heffernan brought his season’s tally to 20 winners when taking the concluding two-mile handicap on Scenic Look. Trained by Adrian Murray for her owner/breeder Thomas Keane, the 33/1 chance was sent about her business before the straight and lasted home to beat the gambled-on Tony Martin-trained 13/8 favourite by a neck.

Peter Fahey’s week got better again on Thursday afternoon when he sent out back-to-back winners, one over fences and one on the Flat, for Athenry owner Basil Holian. Ridden by Denis O'Regan, Visionarian landed a notable success when taking the

Grade 3 novice chase, the 9/2 chance leading off the home turn to win by three-parts of a length from the Gordon Elliott-trained Call Me Lyreen.

Next into the winners’ enclosure was Soaring Monarch which landed the eight-furlong handicap at odds of 6/1.
Declan McDonogh was never far off the pace on the five-year-old which led early inside the final furlong to score by a length from the Michael Mulvany-trained Big Baby Bull.

Friday saw Peter Fahey on the scoresheet once again as Sit Down Lucy, owned and bred by Padraic Ryan, landed the opening two-mile handicap hurdle.

Sean Flanagan was in the saddle this time as the 11/1 chance led over the final hurdle to beat the Emmet Mullins-trained Teed Up by half a length.

Jessica Harrington was another to enjoy further success as she sent out two winners. The 3/1 chance Roman Hands took the seven-furlong median auction maiden.

In a tight finish, the Shane Foley-ridden 3/1 shot was headed inside the final furlong by San Anton, ridden for Ado McGuinness by Gary Carroll, but he battled back to win by a nose in the colours of Champion Thoroughbreds. Foley recorded his own double as Willamette Valley took the fillies’ maiden in another tight finish.

Owned in partnership by Tom Egan, Dominick Glennane, Seamus O'Brien and Bridget Dillon, the 9/1 chance had little difficulty in adding to his recent Ballinrobe success as he made all the running from stall five to win by all of six and a half lengths from the Barry Fitzgerald-trained Dame Rapide.

Gary Carroll and Joe Murphy shared another winner as the Tony Auld-owned Pandora Lovegood readily justified her favourite’s tag in the seven-furlong nursery on Saturday. The strong 15/8 chance made all the running to beat the Joseph O'Brien-trained Goa Gajahby a length.

Seamie Heffernan won the 12-furlong handicap on the Apprentice Cian MacRedmond was the big winner as the week-long festival drew to a close on Sunday when he won the Irish Stallion Farms EBF Ahonoora Handicap on the Ado McGuinness-trained Current Option.

Remarkably, the six-year-old, owned by Dooley Thoroughbreds, Shamrock Thoroughbreds and Bart O’Sullivan was winning the race for the third year running Eddie and Patrick Harty took the seven-furlong auction series maiden with Evening’s Empire which was ridden by Chris Hayes.