Kildare's man US soccer scholarship that lasted a lifetime

Naas native, Michael D'Arcy, left for the US in 1985 on a goalkeeping soccer scholarship and is there ever since. Here he chats with Daragh Nolan on his life experiences and the growth of the game in the US 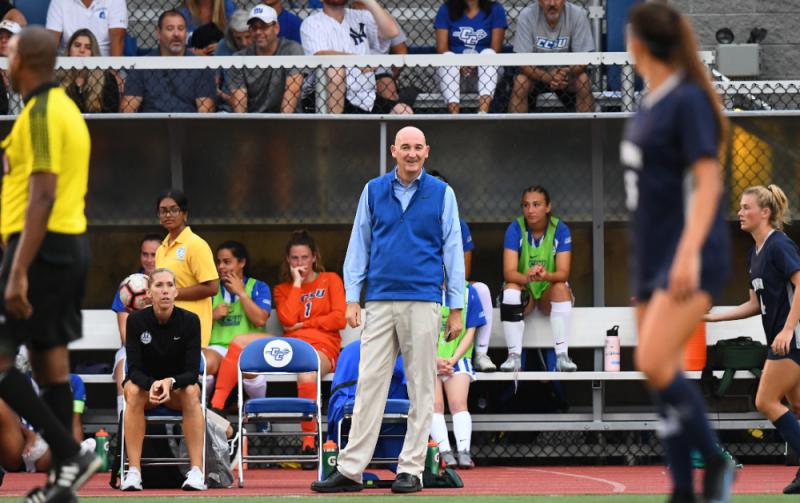 Michael D'Arcy went to the US in 1985, as many Irish do around college age. But as he set off from Naas to North Carolina he probably didn't realise he would never come back. Not permanently at least.

On a scholarship to play for his college and study history, the young soccer goalkeeper was ready to test his metal across the Atlantic. Following graduating with a history degree, Michael furthered his education in graduate school, this time with sports management.

Michael said of his decision: “I hadn’t consciously considered coaching but players go into coaching naturally a lot and it is in the genes my dad played and coached. He was coach of the women’s national team and Newbridge Town.”

In the genes most definitely as Michael’s father, Eamonn (affectionally knows as 'Sheila') was the goalkeeper for the famous Shamrock Rovers side that had exceptional success in the mid to late '50s. As well as being the first manager of the Irish women’s team to be in charge of a competitive fixture.

Eamonn won one Ireland 'B' cap and famously saved a penalty when a League of Ireland XI defeated an English League XI in 1963.

After college Michael went to work for a man called Tony Dichicco, and takes up the story.
“Tony was the head coach for the US women’s national team (1994-1999). He brought me into his soccer company, in 1999 they won the World Cup. During that time I was running a company that ran camps and sold soccer equipment,” Michael said.

“In 2000, I took a coaching job at Central Connecticut State university. I took over the women’s team there and I have been there for 22 years.”

Undoubtedly great family lineage in the growth and development of the women’s game in Ireland and the US but Michael feels America has led the way for so many women’s sports in regards to support and funding.

“America has been on the cutting edge of a lot of women’s sports. Opportunities and facilities for women's sport have led the way. Being involved and up close with the national team when they were winning the Olympics and the World Cup, not directly but through Tony, being close to it all I got to see how the game was going,” Michael explained.

“The ability of these players has improved significantly over time as well as the growth of the game, occer is massive in the States for women and men.”

The growth of women’s soccer globally has been monumental, attendances and viewership at games in the UK and in Europe have increased dramatically in the past 20 years. But it’s been both the women’s and the men’s game that needed life breathed into them when Michael first arrived.

“When I went to the US first, there was no professional league for men or women. The North American Soccer League had just folded and they only had indoor leagues for a while. In 1994 they hosted the World Cup and the game got a huge boost from there. MLS was created in 1996 and the game hasn't looked back since,” Michael said.

The United States alongside Canada and Mexico will also be the next host of the men’s FIFA World Cup in 2026 when Qatar finishes in December of this year.

Another surge of involvement is expected to come as a result of this and the excitement across the pond could be seen this year already as the host cities for the World Cup were announced. The news springing celebrations in the streets of Dallas, Boston and Kansas as they watched the news break on giant screens in the cities.

In the time that has elapsed in global growth of the women’s game, Michael has been growing the game for Central Connecticut State and has been inducted into the Connecticut soccer hall of fame for his contributions.

“It was a nice reward for myself and the family. We’ve won our league 10 times in the last 20 years. It was great to have recognition of what we have achieved in the game,” Michael recalled.

“(The best thing) It’s the people that you’re involved with. The wins and losses come and go, but the amount of wonderful people that you meet at the college stage of their life. It’s great to be able to aid them as a coach, socially and academically throughout that time.”