Naas topple Sarsfields in second round SHC 'B' 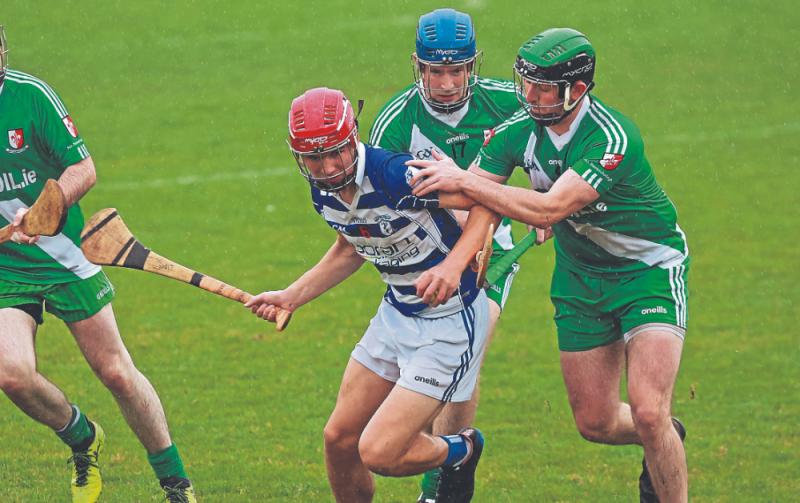 Naas Cian Boran breaks out of defense despite the Sarsfields challenges in the UPMC SHC 'B' clashes at Manguard Plus Hawkfield. Photos: Sean Brilly

Naas completed a Senior A and B double in the UPMC Senior Hurling Championship's on Saturday evening and like their first team this was all to easy.

The opening exchanges were tight and after ten minutes Sarsfields actually lead for the one and only time in the game when Niall O'Connor was on hand to hit home the rebound after Sean Cunningham's inital effort was well saved by Sean Burke.

Naas had opened the scoring through points from Rian Monaghan and Eoin O'Hehir inside three minutes. Colm Galvin pointed a free on eight to register the first Sarsfields score before O'Connor got that goal on ten.

In a game that was played in a constant downpour the officials have to be commended for playing the game on pitch one and that saved the supporters from having to suffer the elements.

Naas were level on 11 after Eoin O'Hehir pointed a free and he had hit two more before the 17th minute to move Naas two ahead.

O'Hehir was then involved in Naas's opening goal.His slick pass to Fionn Maher saw the nippy corner forward get past Enda Scully to shoot low to the Sash net.

Points from Rian Monaghan, Ferran O Sullivan Fionn Maher and two more Eoin O'Hehir frees had Naas 1-10 to 1-2 ahead at the break. Colm Galvin's free bringing his tally to two before the break.

The second half continued in the same vein as the first had finished and Naas picked off points at their ease. A 37 minute goal from Brian Tobin after a goalmouth scramble killed it off as a contest.

Eoin O'Hehir added three to his first have account to finish with nine points and when Fionn Maher,Kevin Byrne,Enda O'Neill and Rian Monaghan added points before 54 Naas were out of sight.

Sarsfields never gave up despite the gap and Colm Galvin and Kevin Roche added late consolation scores.
Naas were winners on a 2-22 to 1-4 scoreline.

On this performance Naas will be pushing for honours at the end of the season and they seem best equipped to challenge Eire Og Corra Choill.

On a dreadful evening for a game, compliments to referee Owen Murphy who had to be referee linesman and at times an umpire as we were short 4 officials at the end of a long day.