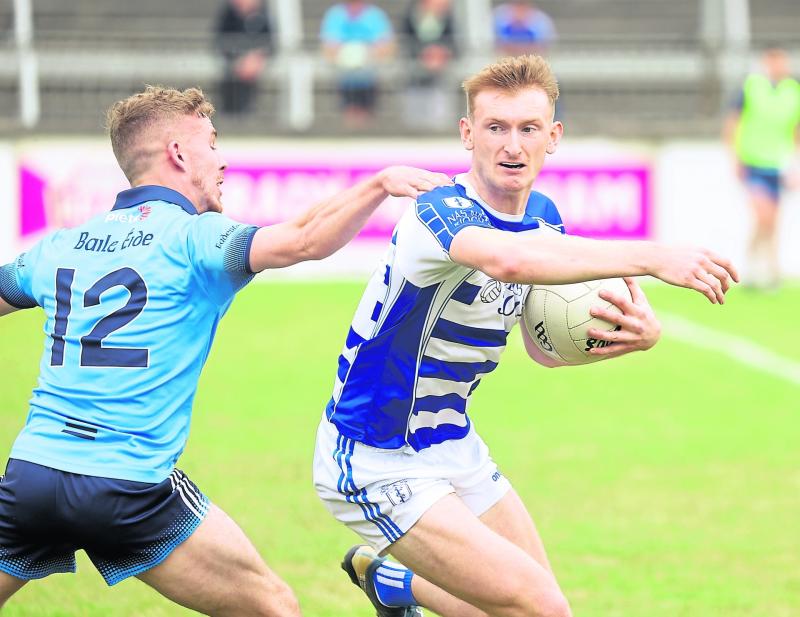 Naas James Burke avoids the out stretched arm of Eadestown Sean Hynes in Round 1 of the Joe Mallon (Renault) Motors, SFC, Group 1

Round 2 of the group games in both senior and intermediate championship are down for decision this weekend and while they are all vital games one in particular stands out as a game to look forward to and that is the clash of county champions Naas and Athy at the county grounds on Sunday.

Naas v Athy: Naas, as expected, defeated Eadestown in Round 1 and while they may not have hit top form, nevertheless were never really threatened, with Eamonn Callaghan their top scorer hitting 1-4, the goal coming in the opening seconds from a penalty.

Athy were always in control against Maynooth, a somewhat disappointing Maynooth it has to be said but the boys in red are playing quiet well, Kevin Feely, Paschal Connell, the Kelly boys (Niall and Barry) are in tip-top form.
This is an opportunity for either to put down a marker and I expect the county champions to edge it but not with a lot to spare.

Sarsfields v Raheens: Another game that should attract a fair bit of attention is the clash of Sarsfields and Raheens.
The Sash surprisingly lost to Celbridge last time, a game they looked like they had in control until Kevin Flynn found the net.
Raheens can count themselves somewhat unfortunate to lose out to Clane and will be hoping to get back on track here.
Sarsfields do not have anything like a settled team at the minute but should prevail to get back to winning ways.

Confey v Kilcock: The third SFC game on Sunday is in Group D, both are struggling somewhat at the minute and a win for either would be a major boost. Difficult one to call but possibly Kilcock..

Maynooth v Eadestown: Interesting game in Group A, both lost the last day Maynooth to Athy, Eadestown to Naas.
As said above Maynooth put in a disappointing display against Athy and while Eadestown went down to Naas there was a lot to admire about Dessie Brennan's side in that local derby with the champs and remember they were without their talisman Emmet Bolton, if he is back it would be a major boost. Maynooth's problem seems to be a lack of fire-power but they still have a decent team overall.
Might come down to the availability of Emmet Bolton if he is not available the vote goes to Maynooth.

Clane v Celbridge: Another very interesting game on Saturday, Clane having defeated Raheens while Celbridge's win over Sarsfields raised a few eyebrows.
Not totally convinced of Celbridge just yet but, on paper at least, they do look a strong side.
Clane, under manager Tom Cribbin, have a few more than decent players, particularly up front, whether they have enough to come out on top here is the question mark.
Celbridge should have gained a bit of confidence from that win and get the vote to win again here.

Round Towers v Johnstownbridge: The Bridge drew with Moorefield last time out, while Towers fell to Carbury.
Johnstownbridge looked more than decent in the opening half, led by six at the break but came under sustained pressure in the second and could have lost it late on.
Towers will be very disappointed to Carbury (1-11 to 1-8) and will be hoping to win this one, a loss could send out all the wrong signals.
JTB as ever are very difficult to decide on, they are a side you would certainly be leaving out on any bit of an accumulator and that's for sure but they do get the vote here, but as ever with them, a very tentative vote.

Clogherinkoe v St Laurence's: The Cloghs had a fine, if narrow, win over Kilcock while The Larries put in a great second half defeating a poor Confey side, with Padraig Fogarty again putting in a sterling display.
The Cloghs will be looking to their dual scoring threat of Jack Robinson and Cein McMonagle and if they can hit form could record another victory, providing they can keep Podge quiet — easier said than done.

Moorefield v Carbury: There is just one SFC game down for decision on Friday and that sees Moorefield and Carbury clashing in St Conleth's Park.
The Moores, as said earlier, earned a hard-earned draw with JTB while Carbury got the better of Towers.
Moorefield way off in that opening half against JTB but put in a very creditable display after the break with Aaron Masterson putting in a mighty display.
Carbury had three points to spare over Towers, a win that will boost their confidence but if Moorefield can repeat that second half display from their last game they can prevail.

IFC
In Group A of The Auld Shebeen IFC there could be wins for Sallins (v Castledermot) and Leixlip (v Two Mile House.
In Group B Caragh should have too much for Rathangan while Allenwood should prevail over Ellistown.

JFC
Round 3 of the Tom Cross Transport is down for decision with wins expected in Group 1 wins expected for Kill, Straffan and Robertstown while in Group 2 should see victories for Cappagh, Athgarvan and Castlemitchell.