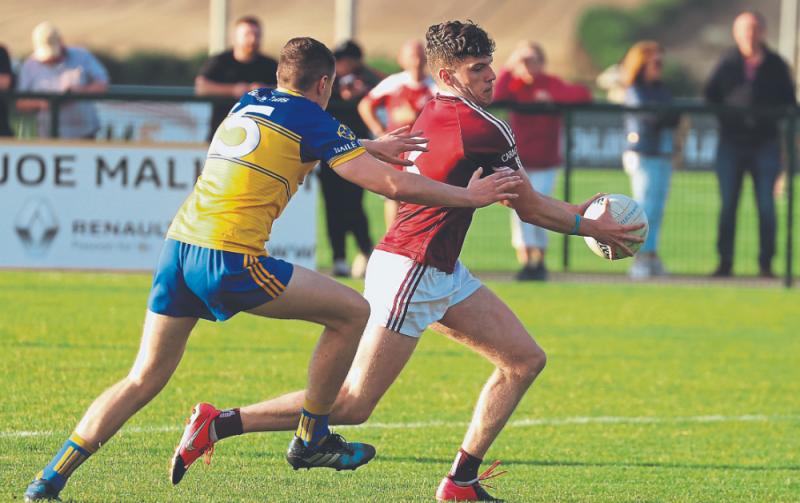 The second game in Hawkfield on Thursday evening saw Caragh and Ellistown clash in Group B in The Auld Shebeen Pub Athy IFC in front of a decent attendance.

Caragh were firm favourites coming into this one and while they took the lead inside a minute from the impressive Darragh Swords, they were shocked a minute later when Milltown's wing forward, Tadgh Watson got on the end of a fine move to fill the Caragh net.

Darragh Swords (free) and Eoghan O'Haire had the sides level on nine minutes but Ellistown hit back when Andy O'Neill pointed on ten minutes.

A Darragh Swords point from play tied it up again but a fine effort from Conor O'Loughlin saw the boys in blue and yellow one point ahead as we reached the mid-way point.

That lead, however, did not last long as Eoghan O'Haire, who had a very impressive game for Caragh, leveled and when Daniel Lynam fired over Caragh were in front for the first time since the opening minute.

And that lead was cemented on 22 when Jake Corrigan got inside his marker but was pulled back and referee Jones had no option but to point to the spot. Up stepped Darragh Swords and as cool as a cucumber rolled the ball to the left of Oran Donnelly to give his side a healthy lead of 1-6 to 1-2.

By half-time that lead was pushed out to seven with points from Jake Corrigan, Joe Barrett and another Daniel Swords free to lead 1-9 to 1-3 at the break.

Difficult at that stage to see how Ellistown could get back into this one but they did get the opening score of the second half through, Tadgh Watson; Kevin Campbell replied but Ellistown hit back when a high ball in from Conor Lindy was fielded by

Shane Maughan who was fouled and Conor Lindy fired over the resultant free to reduce the deficit to six.
The deadly due of Darragh Swords and Eoghan O'Haire raised two whites for Caragh as the boys in maroon took complete charge from here to the end of the game adding points from O'Haire (3) and Darragh Swords and while Darragh Watson got the final point of the game, a free, it was not enough as Caragh won comfortably on a final score line of Caragh 1-16 Ellistown 1-5.